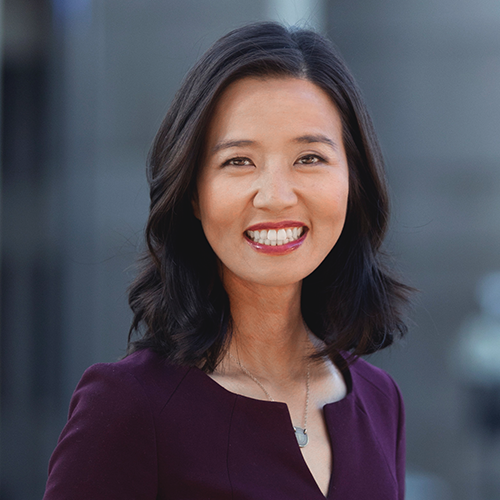 Yet it is not the simple fact of Michelle Wu’s electoral wins that have established her as a Voice of Change within the community, but rather the work she has done in those leadership positions to champion diversity, equity, and inclusion in all its forms to make Boston a more welcoming place for all.

“When you have an award honoring a Voice of Change who has championed diversity, equity, and inclusion and you have Michelle Wu as your mayor, the two are a natural fit,” noted Bill Gabovitch, Beacon Award Co-Chair.

“I am delighted that the BBA’s Beacon Award committee has selected Mayor Michelle Wu as this year’s Voice of Change honoree,” added Boston Bar Association President Chinh H. Pham. “Mayor Wu has been a tireless advocate for many causes near and dear to the BBA, including immigration and family rights, transparency in our city’s police department, and a more inclusive health care system dating back to even before her City Council days. Since her historic 2021 Mayoral victory, she has continued to be a true voice of change for the city’s most underserved communities. The BBA is proud to recognize that work at this year’s ceremony.”

As President Pham stated, Wu has used her voice as a tool for positive change since before her time on Boston’s City Council. She has a background in community advocacy, having worked at the WilmerHale Legal Services Center in Jamaica Plain, providing legal advice to low-income small business owners, as well as at the Medical-Legal Partnership at Boston Medical Center on immigration law cases for survivors of domestic violence. Forced at the age of 23 to leave her job and return home to care for her mother, who was experiencing mental health challenges, and raise her younger siblings, Wu has also been a leading voice in improving treatment for mental illness and care for those who live with it.

“I catch glimpses of my mother in Bostonians experiencing homelessness and self-medicating for trauma through substance use,” Wu wrote in a 2013 Boston Globe op-ed recognizing Mental Health Awareness Month. “I know the resilience of students in our city who are raising themselves while a parent or guardian suffers. I am painfully familiar with the impossible juggle for caretakers trying to navigate language and cultural barriers, insurance pitfalls, and their own unyielding work schedules—only to be heartbroken by the limits of medical treatment.”

While campaigning for Mayor, Wu called for an exhaustive city-wide plan to address mental health, as well as associated issues relating to drug abuse and homelessness, calling for the city to “take direct accountability” and respond with dignity, rather than criminality. Major tenets of her plan included centralized leadership, transparent community engagement, and state and federal policy change.

Homelessness and affordable housing as wider issues have also been at the forefront of Wu’s work as Councilwoman and Mayor. Steadfast in her belief in housing as a human right, she has been a champion of more equitable housing within the city. This includes seeking restrictions on short-term rentals and support for the “decommodification” of housing, including the expansion of cooperative housing and community land trusts, the revival of rent stabilization, and the establishment of a renters’ right to counsel throughout eviction proceedings. She committed to using vital American Rescue Plan funding provided to the city—$500 million in federal funds—to address Boston’s housing crisis. She has also called for an increase in city vouchers and rental subsidies.

Mayor Wu has also shown an impressive and necessary understanding of how diversity, equity, and inclusion—whether based on race, gender, sexual orientation or otherwise—impact so many other sectors within the city. This includes housing—she has called accessible and affordable housing a civil rights issue—but also extends to everything from education to health care to climate change.

“Racism is a public health crisis in Boston, from tragic disparities in Black maternal health to the epidemic of gun violence that disproportionately harms Black and brown communities,” Wu has stated. “The fight for equality includes ensuring linguistically and culturally competent care, access to gender affirming services, and health policy that centers people with disabilities and chronic illnesses.”

Regarding access to gender affirming care, Wu coauthored an ordinance with then-councilmember and current Congresswoman Ayanna Pressley which prohibits Boston city government “from contracting with any health insurer that denies coverage or discriminates in the amount of premium, policy fees, or rates charged…because of gender identity or expression,” thus ensuring equal health care rights to transgender city employees and their dependents, including coverage for gender-affirming procedures, hormone therapy, and mental health services. At the time, Wu called the ordinance, “a matter of equity and of fairness.” In 2015, Wu also authored an ordinance eventually passed by the Council guaranteeing city employees six weeks of paid parental leave, which Wu called “a must for working families,” including in instances of stillbirth and adoption.

“I’ve worked closely with Michelle Wu for nearly a decade,” Pressley said in endorsing Wu during her run for Mayor. “Michelle has a passion for service and a vision for our city that is grounded in her own lived experience and belief in the transformative potential of policy. I look forward to continuing to work alongside her to tackle the entrenched challenges of racial, social, economic, healthcare, and environmental injustice facing our communities.”

Recognizing the many, oft-unseen impacts of systemic racism, she spoke in 2019 following the release of a study, “Inequitable Exposure to Air Pollution from Vehicles in Massachusetts,” which indicated that communities of color across Massachusetts—due to decades of decisions routing highways through predominantly Black, Asian, and Latinx neighborhoods—are disproportionately affected by air pollution from gas vehicles, with Chinatown facing more air pollution than any other community in the Commonwealth.

“We know that transportation is often the first way that communities are segregated,” then-councilwoman Wu said at the time. “This report reminds us that the harm doesn’t just end when that highway gets built without neighbors’ input or in spite of their opposition; the harm continues because it is these communities, which have contributed the least to the problem, that now absorb the impacts disproportionately.”

Mayor Wu has championed other policy changes aimed at addressing pollution and climate change as well. In 2017, while serving on City Council, her resolution to adopt Community Choice Aggregation to help lower energy costs was approved unanimously; that same year, Wu drafted an ordinance implementing a plastic bag ban which was also approved. In addition, she led the effort for the Boston City Council to support the Green New Deal, a position officially adopted by the council in April 2019. Her August 2020 “Boston Green New Deal & Just Recovery Program” aims for carbon neutrality for all government buildings in the city by 2024, 100% renewable energy by 2030, and city-wide carbon neutrality by 2040.

Since her election as Mayor, Wu has continued, in her words, “fighting for shared prosperity through aligning city contracting to close the racial wealth gap and policies for racial and economic justice.”

“This moment is a call to action,” Wu said of her campaign in 2021. “While we work to implement concrete policies that build wealth and power among Black and Latinx residents, immigrants, and other underserved communities, we must also shift the rules, practices, and norms that have enabled racial inequities to persist since our city’s founding. To me, that means thinking big about how to build a more resilient, healthy, and fair Boston, and then having the courage and political will to fight for all families.”

She has been steadfast in addressing the root causes of racial wealth disparity in the city, indicating a desire to “rewrite the rules that shape our political and economic systems and rethink who gets to write the rules in the first place,” to create a more equitable city. As part of her plan to address the wealth gap, Wu has called for increasing minimum wage, proactively affirming the right of all workers to organize and bargain collectively for their rights, and protecting the rights of undocumented workers. To ensure these and other worker-focused policies are implemented, she created the Cabinet for Worker Empowerment, currently led by Chief of Worker Empowerment Trinh Nguyen; the cabinet is responsible for advancing the well-being of all Bostonians and will receive both the resources and the oversight necessary to make it happen.

“Boston can do so much more to advance and empower workers across all of our neighborhoods,” said Wu of the new position. “Our economy is at a turning point, and as we work to recover from the impacts of the pandemic, we’ll support one of Boston’s greatest strengths: our workforce and people. When we make Boston a city for everyone, every family and business benefits from our growth.”

The Beacon Voice of Change Award is given to a luminary leader in the legal community who has forged a new path and has played an extensive role in advancing diversity, equity, and inclusion within the profession. Mayor Michelle Wu, from her beginnings as a legal services provider, and extending into her time as City Councilor and now Mayor, has shown a commitment to advancing those principles not just within the legal community, but throughout the entire Boston community. She has been not just a voice, but an active agent of change, forging a new path for herself and for the individuals and communities that make Boston the vibrant city it is—a path toward a more diverse, equitable, and inclusive home for all.