As you have likely gathered if you’re a regular reader of this blog, the BBA had a remarkably productive year on the policy front.  We’ve recently been touting the work of our Amicus Committee, and look forward to following up with you about a couple of cases with oral argument either recently heard (Fisher v. University of Texas at Austin II in the US Supreme Court on December 9) or fast approaching  (Commonwealth v. Wade in the SJC on January 11).  However, this post is devoted to our Sections and all the comments they submitted to various court working groups and committees in 2015.

For those of you unfamiliar with this process, the courts at any time have various working groups and standing committees considering changes to various rules of practice and procedure.  When these groups compose a draft rule, they generally post the proposed revisions online and invite comment from interested parties.  We know from experience that they appreciate our efforts to gather practitioners’ opinions and take them very seriously, so the BBA works with all its Sections to solicit and facilitate their comments and sends them to the courts on behalf of the Sections.

It is important to note that the BBA itself often does not take a position in these instances.  The comment process is an opportunity for members of the bar to be heard and we want to make sure that the court can benefit from all the differing points of view on an issue.  Therefore, although each submission is approved by the BBA Council, informal Section comments do not receive as thorough a vetting as full BBA policy positions, because they do not require a general consensus of the bar or continued BBA advocacy.

Here are some of this year’s highlights:

Their comments also included a number of items on which there was no consensus, ranging from broad policy issues to specific language suggestions.

In November, the SJC released its new jury instruction on eyewitness evidence, which will be given “upon request of a party, before opening statement or immediately before or after the testimony of an identifying witness.”  The Justices noted that the instruction will need to evolve with new developments in the science of identification and requested that the Standing Committee on Eyewitness Identification continue to review the issue and recommend further changes as needed.  Here is the full statement from the court.

In September, the BBA also voiced its support for proposed amendments to SJC Rule 3:11, which provides a new role for the SJC in reviewing these judicial ethics issues.  The rule would give the SJC the new power to both issue Ethics Advisory opinions to clarify the meaning and application of and provision of the CJC and to expound upon provisions of the Code that are of broad interest and application.  It gives the SJC power to essentially serve as an appellate body for decisions by the Committee on Judicial Ethics (CJE), and extends the ability to request Ethics Advisories to any judge or lawyer, whereas only judges can request CJE opinions.

In late October, the SJC released the revised Code of Judicial Conduct and reported the adoption of the revised SJC Rule 3:11.  The code and rule will take effect January 1, 2016.  We were pleased to see that many of the Ethics Committee’s comments incorporated into the Code and the sections we supported were included without substantive changes.

The BBA’s Real Estate and Bankruptcy Law Sections both provided comments to the Trial Court.  The Real Estate Law Section was satisfied with the standing order as an appropriate measure to address unnecessary confusion in the litigation process.  The Bankruptcy Law Section was concerned that the proposed standing order did not provide a good-faith exception.  They discussed possible situations when it would be more beneficial to bypass the address verification process in order to expedite the matter and provided the Trial Court with a couple of possible language edits to achieve this goal, one for a show of cause and the other based on time.

The Trial Court approved the standing order in late June 2015, and it became effective October 1st.  The final version does not incorporate the changes proposed by the Bankruptcy Law Section.

Perhaps in response to these comments, the Court has put this issue on hold as it works out how best to implement this change.  As the Chief Justice explained in his State of the Judiciary address, “We have heard loud and clear the comments furnished by the MBA and BBA when we aired the proposal to increase the procedural limit in civil cases in the District Court and BMC from $25,000 to $50,000 … [O]nce [dedicated civil] sessions are up and running, and have demonstrated that they can efficiently handle these civil cases, then we will reopen the idea of increasing the procedural limit to $50,000.”

The BBA noted its support for the change, and expressed its hope that all involved personnel would be adequately trained and that the rules would be uniformly enforced by all DOC facilities.  The BBA also encouraged EOPSS to consider extending application of the rule to county correctional facilities as well to assure uniform proper treatment of attorneys at all correctional institutions.  The Criminal Law Section was also largely supportive, individual members shared some concerns, such as with the revised rules’ record-keeping requirements and the potential limits it would place on correction officers.

Shortly after sending our comments, we attended a hearing on the revised CMR, where individuals and organizations were given the opportunity to publicly voice some of their own concerns before a panel of EOPSS and DOC representatives.  Like the BBA’s comments, most groups were generally supportive, but also raised concerns.  Read more about the hearing here.

The Comments are generally supportive of the revisions, though they express some concerns about the addition of sanctions and their potential impacts on criminal law.  In addition, consideration of these proposed amendments prompted a second round of discussions on the larger issue of online access to court records.  We anticipate the opportunity to comment on a forthcoming rule on this issue, and are eager to take part in the debate.

While the Ethics Committee was generally supportive of the change, their comments expressed some concern about the removal of the local-counsel piece.  Though the Massachusetts rule and notice to comment explanation seem concerned only with protection of the company using foreign counsel, the Ethics Committee noted that other parties to litigation as well as the courts could benefit from the requirement for consultation with local counsel.

This conclusion was similar to the implications shared at our recent program on the changes to the federal rules.  The presentation materials from this program provide some more insight on the origins and development of this proportionality language. 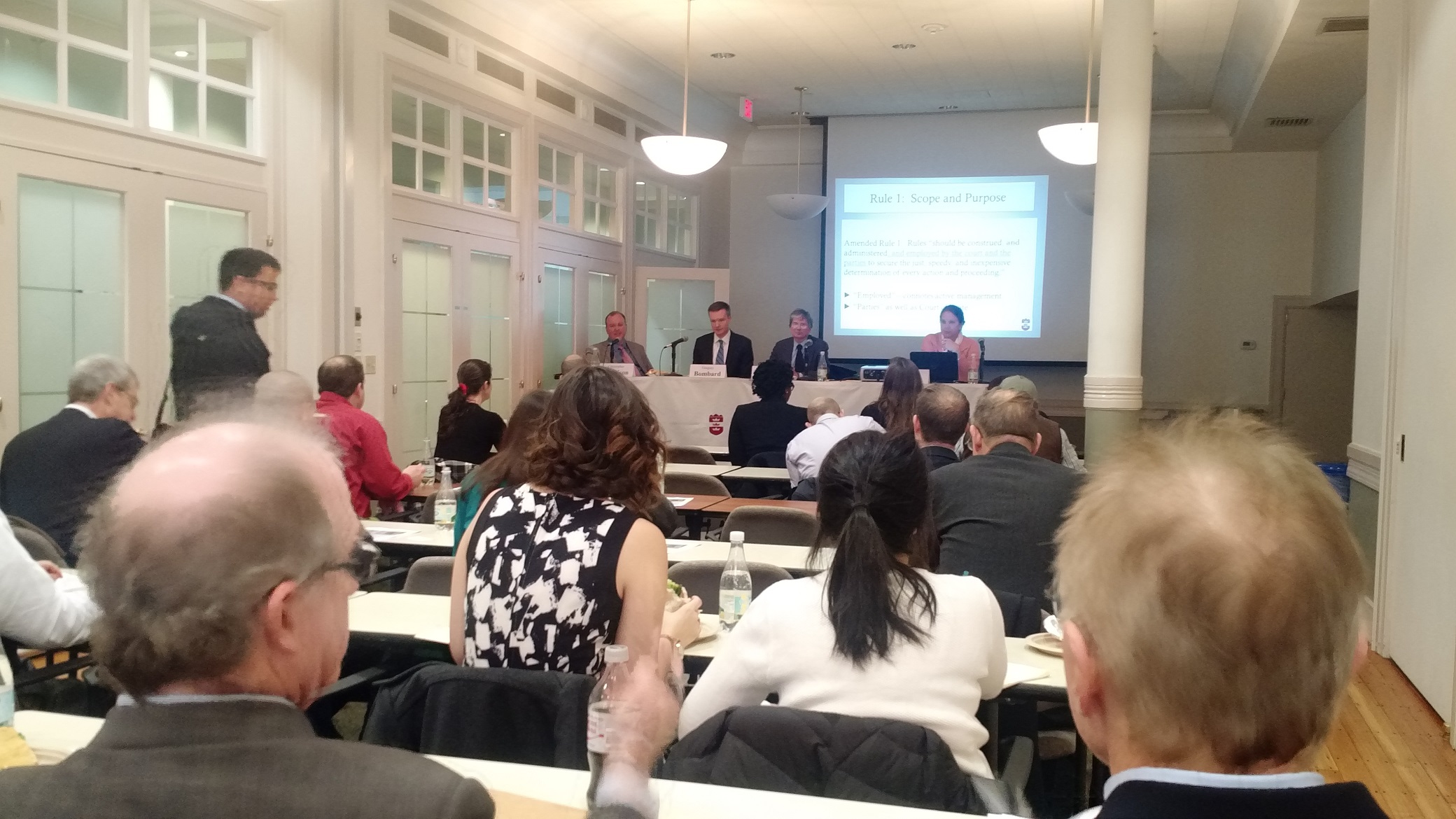 The presenters, BBA Council member Chris Morrison, Jones Day, Gregory Bombard, Duane Morris, James Berriman, Evidox, and Paula Bagger, Cooke Clancy & Gruenthal, LLP, seemed in agreement that while the changes to federal discovery Rule 26 could have some implications for practice, revisions to other sections would likely have larger implications.

Thanks to all the Sections and Committees for your work on these comments.  We will continue wrapping up the comments on MRCP Rules 26(b) and 1 and will keep you informed on how these and other feedback are incorporated by the Courts into their rules.  We look forward to continuing to be part of these sorts of discussions in the future and thank the courts and agencies for making this a thorough and inclusive process.