Will This Be the Year? Hearing on Longstanding BBA Probate and Family Law Bills

The BBA’s Trusts and Estates and Family Law Sections have long been amongst the most involved with policy and thus it was fitting that representatives from both were in the State House to testify on long-time BBA bills of interest on Wednesday.  The Judiciary Committee held the first of two hearings on probate and family issues and we provided testimony on three of the fifty-one bills on the agenda.

H1291 – An Act making Corrections to the adopted children’s act

The BBA been worked on this issue both through litigation and legislation.  Bear with us, as the full explanation is a bit technical, but in simplest terms, the bill changes the law to align with the SJC ruling in Bird v. BNY Mellon, a case that restored a 1958 law regarding trusts.  Got it so far?  Here is the detailed explanation prepared with the invaluable help of Brad Bedingfield of Choate and Marc Bloostein of Ropes and Gray.

In 1958, the Legislature modernized the law to presume that adopted persons are included in terms like “child, “grandchild” and “issue” unless the instrument plainly states otherwise. But it made the new law applicable only to instruments executed after its effective date.  The old law, which presumed adopted persons to be excluded unless they were adopted by the testator or settlor himself or herself, continued to apply to pre-1958 instruments. For the next 50 years, families adapted to this presumption for older trusts, making compensating and often irrevocable arrangements for adopted descendants who were not beneficiaries of these old trusts.

However, in 2008, that all changed.  Chapter 524 of the Acts of 2008 (which became effective in 2010) reached back to pre-1958 trusts and reversed the legal presumption, providing simply that the 1958 rule of construction (presuming inclusion of adopted people) would now apply to all instruments whenever executed.  This shift came as a complete surprise to the trusts and estates bar, banks, and other professional trustees, who knew nothing about the law until after its enactment and likely would have strongly opposed this sudden and disruptive change.

The problem was that from 1958 to 2008, lawyers had counseled numerous clients about how to provide for adopted children who were not benefited by pre-1958 family trusts. In many cases where such trusts benefitted only biological descendants, parents and grandparents with both biological and adopted descendants adjusted their estate plans to compensate the adopted descendants who were not thought to be beneficiaries under the pre-1958 trusts.  These plans could not always be changed to account for the 2008 change, which undermined the reasonable expectations of those who had created estate plans in the preceding decades.  It also removed existing interests in trusts by bringing in adopted beneficiaries to share in the trust benefits, unexpectedly diluting the interests of the long-standing beneficiaries and resulting in a windfall for adopted beneficiaries, who effectively got double shares where families had made corrective estate plans.

In the 2012 Bird case, in which the BBA filed an amicus brief, after one aggrieved beneficiary of a pre-1958 trust filed suit, the SJC found the 2008 reversal of the old, pre-1958 presumption to be “not reasonable” in that case.  The SJC felt that the 2008 bill violated due process by taking away vested trust interests or other property rights without serving a sufficient public interest to outweigh that loss by trust beneficiaries.  However, while the Court indicated generally that its ruling presumably would apply to other situations, it did not rule on the constitutionality of the 2008 bill in all cases.  Consequently, the 2008 law is still on the books.  Our bill, H1291 would remove it, clarifying the law and assuring that estate plans are executed as designed.  To see our full written testimony, click here.

Judge Ginsburg shared his illustrative experience in the 1998 case of Cricenti v. Weiland, which set the precedent for this bill.  The Judge presided over the custody claims of a Massachusetts divorce.  The mother had remarried and wanted to move to Nebraska with her children.  This was concerning to the children’s father, who asked Judge Ginsburg what would happen if the wife ignored a potential parenting agreement – would he have to go to Nebraska to litigate the case?  Judge Ginsburg assured him that was ludicrous, that Massachusetts would have continuing jurisdiction over the case, and that he would personally see to it that the mother and children would have to come to Massachusetts should there be any issues.  With this assurance, the father signed the agreement, permitting the mother to bring the children with her to Nebraska.

Seven months later, the mother went to a court in Nebraska and changed the terms of their parenting agreement.  The husband took action.  She was served in Nebraska and Judge Ginsburg was ready to find her in contempt.  However, the Court of Appeals had other ideas, holding that Massachusetts does not have exclusive continuing jurisdiction.  After a party leaves for six months, she is free to start over in another state and there is nothing Massachusetts can do about it.

Since then, the Judge has spent nearly twenty years trying to change the law.  Massachusetts is the only state left that has not adopted the UCCJEA, and thus is the only state that cedes jurisdiction to the home state of the custodial parents after six months of residency in the new state. This arrangement is extremely unfair to the “left behind” parent who is then forced to travel and litigate the issue in another state.  It also promotes forum shopping.

The purpose of the bill is to remedy these interstate conflicts.  Under the bill, once a state has exercised jurisdiction over custody, that state has exclusive jurisdiction over potential changes in the judgment or order, so long as the parent, the child, or someone acting as a parent remains in the original state.  This construction is very similar to the current laws regarding child support in all fifty states (including Massachusetts), which have an “exclusive jurisdiction” design.

The bill will lift a burden on litigants, who are more mobile in the modern world, and on the courts.  Although, under the bill, Massachusetts courts will maintain jurisdiction over some custody cases, they will avoid the contentious battles that currently arise in removal cases, where parents are fighting both to keep their children and to keep any future custody litigation close to home.

S748 – An Act relative to the elective share of surviving spouses

Some of you may remember this issue, as it too has been on the BBA’s agenda for some time.  It is another issue that doesn’t skimp on complexity.  Essentially, a spousal elective share is a potential remedy for a spouse left out of his or her significant other’s will.  Under current law, this disinherited spouse is generally entitled to claim at least one-third of the deceased spouse’s total estate.  The law ignores factors such as the duration of marriage, the age of the surviving partner, and the state of the economic partnership.

The spousal elective share bill changes the calculation used to determine the elective share.  Under the bill, the share is a sum of all the couple’s relevant assets, multiplied by a percentage based on the length of the marriage – ranging from three up to 100 percent with fifteen or more years of marriage – then dividing that total in half.  The bill reflects a similar economic theory to the one behind the equitable distribution system that is now applied when a marriage ends in divorce.

The BBA has been working on spousal elective share legislation since the 1990s.  At that time, the BBA and the Women’s Bar Association (WBA) composed one version of the bill, while the Massachusetts Bar Association (MBA) had another.  Over the next few years, these three groups worked together to draft a single consensus bill that the BBA Council first voted to endorse in 2007.  This bill has since been replaced by a new bill which is similar, though not identical, to the Uniform Probate Code’s spousal elective share provision.  The ad hoc Elective Share Committee explained their proposed amendments in a 2012 report, which was submitted to the Committee at Wednesday’s hearing.  The BBA’s Family Law Steering Committee and Trusts and Estates Section voted to support the latest version of the bill in November 2012 and the BBA Council again approved the bill in February 2013.  The MBA and WBA also support the bill and testified along with us on Wednesday. 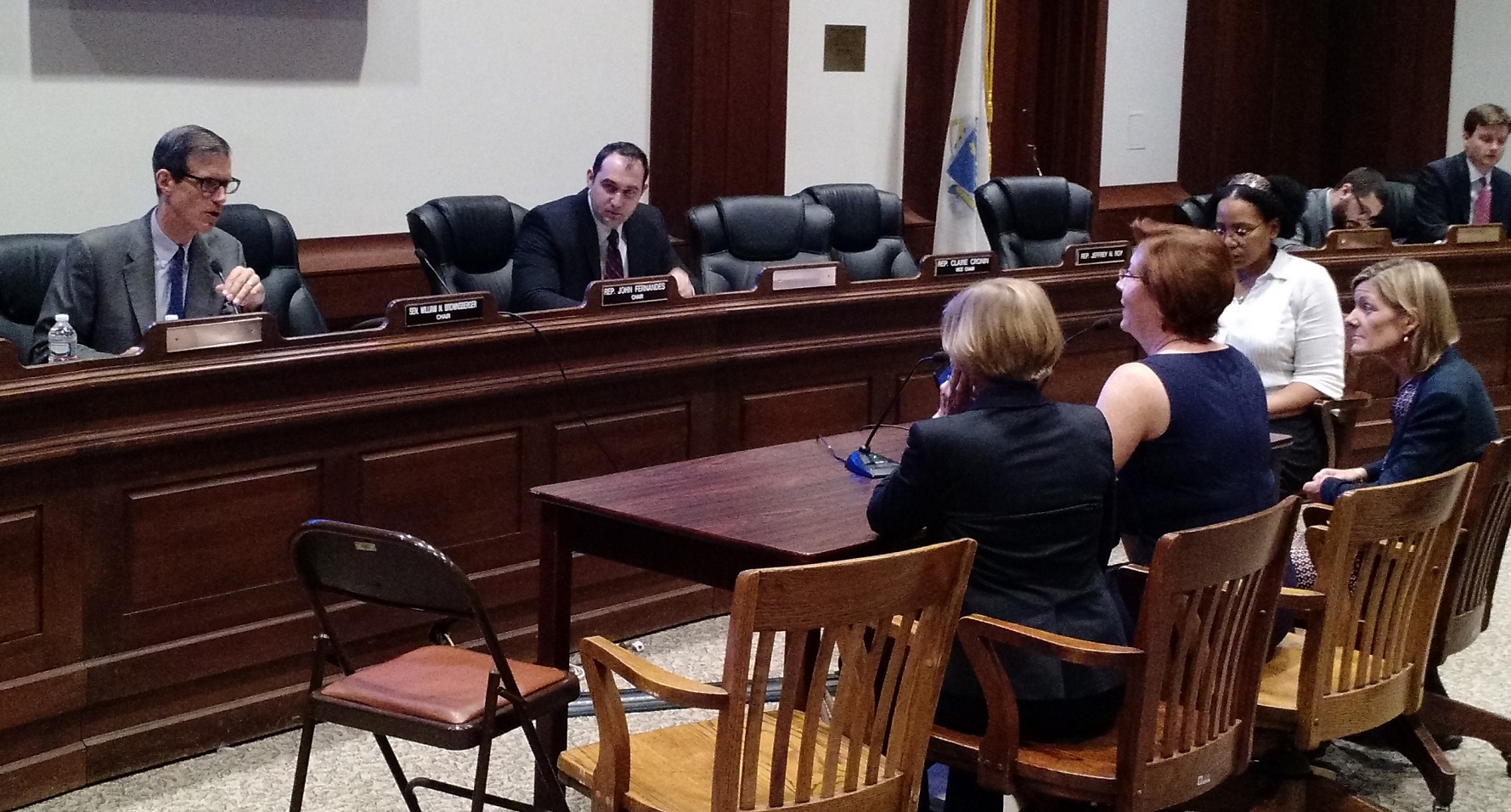 The panel consisted of:

They gave a great presentation, explaining not only the need for the bill and its complicated history, but also the technical aspects.

We also have another State House update: another BBA bill H3611 (formerly H1284), passed the House this week, following testimony by Real Estate Section Co-Chair Michael Fee, Pierce & Mandell P.C. at a May hearing.  The bill helps to protect consumers and other owners of improved real estate that violates zoning rules where a municipality has taken no enforcement action.  To learn more, read our testimony.  We will continue to track this bill as it moves through on the Senate side, and all the above discussed bills as they continue through the legislative process.