They may have needed snow boots to get there this year, but once again, hundreds of attorneys took part in Thursday’s Walk to the Hill to promote funding for civil legal aid.  This annual event is organized by the Equal Justice Coalition (EJC) – a collaboration created by the BBA, the MBA, and the Massachusetts Legal Assistance Corporation (MLAC) – and it always makes a great impression on the Legislature.  The largest lobbying day for lawyers in Massachusetts, this year lived up to the hype.  While we are still waiting for final numbers, there were more than enough lawyers to pack the Great Hall, as you can see below. 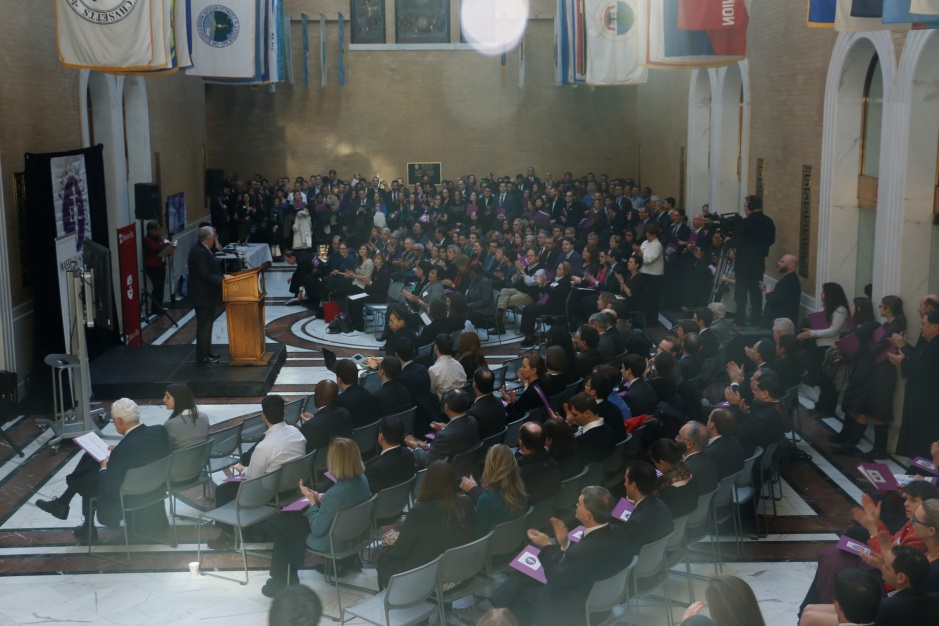 Our day started with a Walk to the Hill meet-up and networking event hosted at the BBA by the Solo and Small Firms and New Lawyers Sections.  Led by Gary Bloom and Lianne Henderson, the group enjoyed light breakfast and a discussion of legal aid before heading over to the State House. 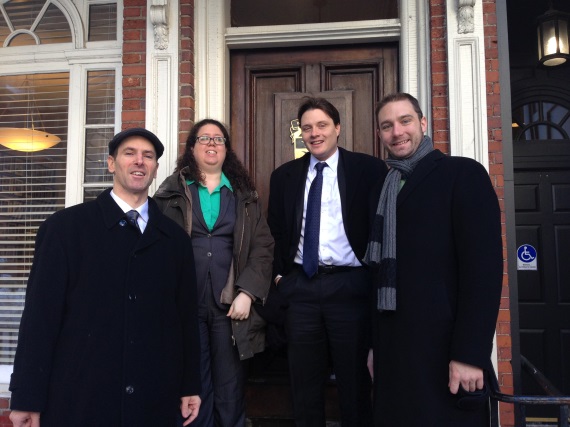 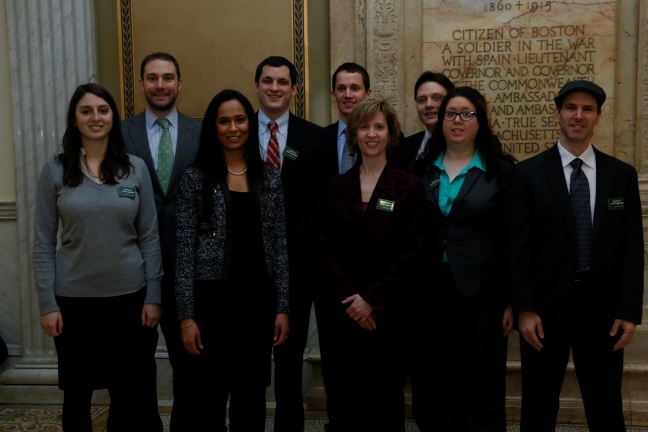 BBA leadership also got in on the act.  At 10:00 am, President Julia Huston met with her Representative, Alice Peisch. 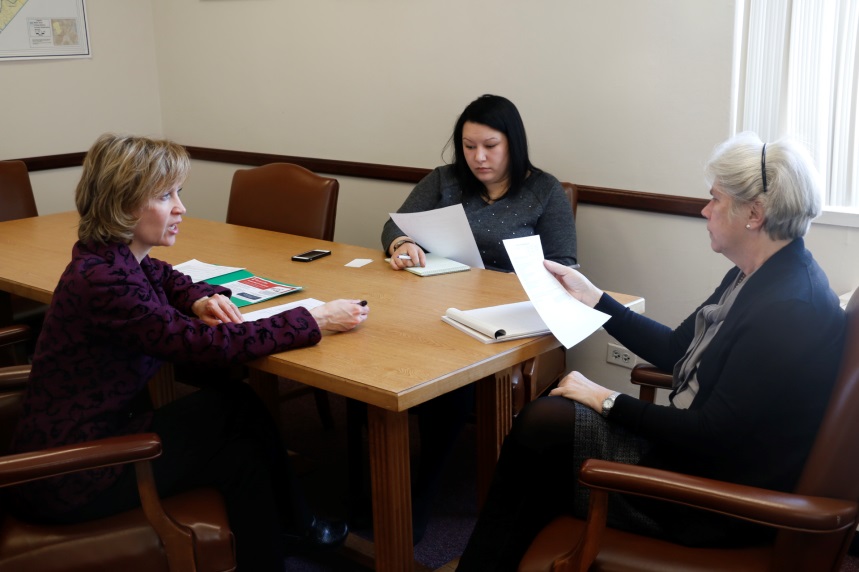 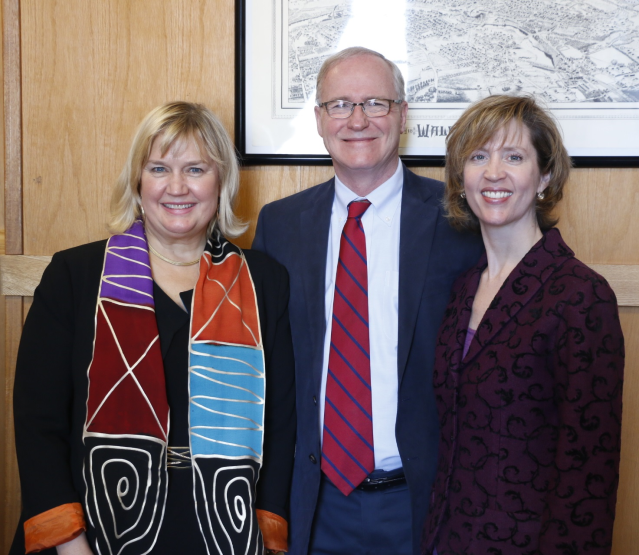 Both legislators were well-versed in the issues surrounding civil legal aid – not surprising, as they have been strong supporters of the MLAC, which funds civil legal aid programs across the Commonwealth.

By 11:00 AM, registration was beginning, and soon the State House’s Great Hall was standing room only and our twitter feed began buzzing with live tweets of the event.  After an enthusiastic welcome from EJC Chair John Carroll, Supreme Judicial Court Chief Justice Ralph Gants took the podium.  He explained that, while the current MLAC funding of $15 million may sound like a lot of money, it is the rough equivalent of every person in the state buying a Dunkin’ Donuts coffee once a year.  The request for $10 million in additional funding is nothing more than that cup of joe plus a bagel . . . without cream cheese.  He was able to put the numbers in perspective and provide some much needed levity to the event.  He even brought his own props: 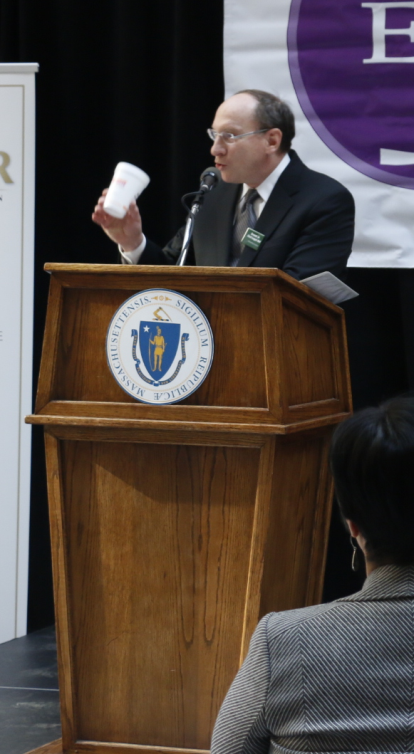 BBA President Julia Huston told the crowd about the cost savings achieved through legal-aid funding, as demonstrated in Investing in Justice, providing attendees with the information they would need to speak knowledgably to their legislators.  MBA President Marsha Kazarosian also expressed her support for civil legal aid. 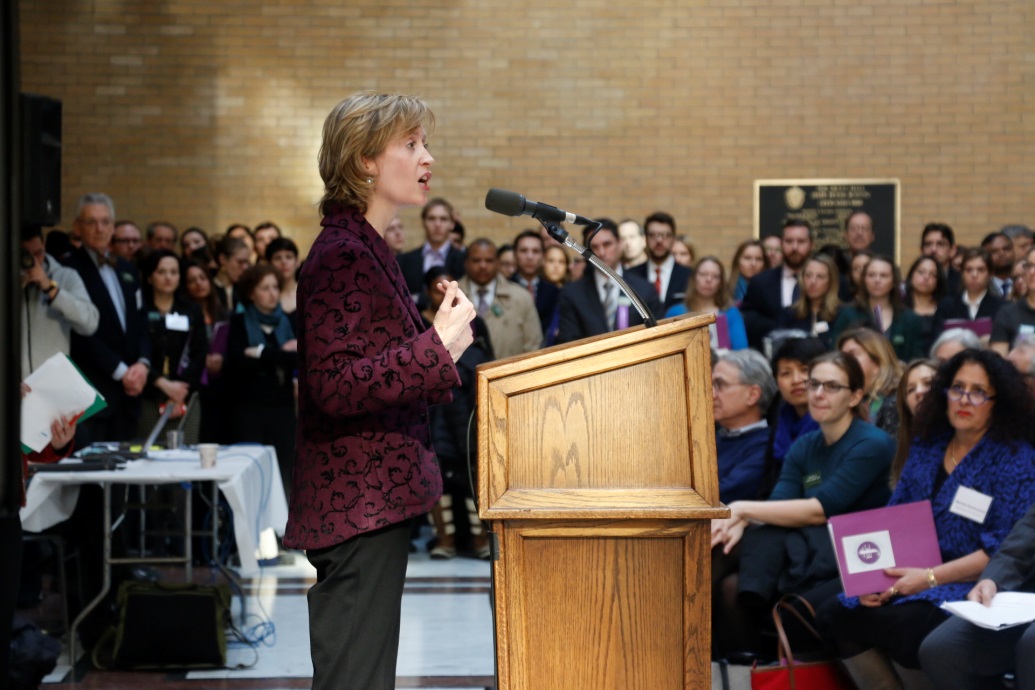 Two civil legal aid clients spoke as well, providing the day’s emotional high point.  They each related how civil legal aid attorneys from different parts of the state had changed their lives for the better by helping them gain protection from abusive spouses and win custody of minor children.

J.D. Smeallie, chair of the BBA Statewide Task Force to Expand Civil Legal Aid in Massachusetts, was called to the podium by John Carroll to give an impromptu explanation of how we got to this point.  He told how IOLTA funding has dropped $27 million since 2007, while the number of eligible individuals has increased and the pool of civil legal aid attorneys has shrunk.

Attorney General Maura Healey followed, putting a cap on the speaking program by proclaiming that the functioning of our society and legal system relies on everyone being recognized, included, and represented – civil legal aid assures that everyone has access to that representation.

By noon, the speaking program was drawing to a close, and it was time for legislative visits.  The hundreds of lawyers assembled in the Great Hall broke off as individuals and small groups, making their way to legislative offices to speak with their respective representatives.

In all, this year’s Walk to the Hill was a great success.  Hundreds of lawyers came, their presence alone making a statement about the private bar’s support of civil legal aid.  They were inspired by the words of the Chief Justice, the Attorney General, bar leaders, and especially civil legal aid clients, and then they spread out throughout the State House to advocate for civil legal aid funding.  Hundreds more participated in Talk to the Hill (and you still can too!), a simultaneous call-in event where lawyers from outside the greater-Boston area phoned their legislators to express similar sentiments.  By taking only about an hour out of their busy days, these lawyers were able to make a huge difference for people in need.

Thank you to all the lawyers who participated – you have truly made a difference.  And we end with a final plea – don’t stop now.  The budget process runs another six months, and we need your continued support.  First up is contacting the Governor, to let him know the importance of civil legal aid.  Keep an eye out for e-alerts from us on key budget times and meet with, call, or send an email to your legislator then, too.  Keep up the relationship, and keep civil legal aid funding their priority.  Thank you again and keep up the great work!