Another Walk to the Hill is in the books, and while it may be something of a cliché to say that the speakers, organizers, and participants outdo themselves every year, that proposition certainly seemed to be right on the money last Thursday for the 2017 edition.

Don’t believe it?  Check out our new Issue Spot podcast on Walk to the Hill to hear from some of the participants, some of the volunteers who showed up to meet with their elected representatives at the State House, and one State Senator who spoke to us about the critical importance of constituents showing up at legislative offices to share their personal stories and their insights about the importance of state funding for civil legal aid.

Speaking of showing up, about 700 lawyers came out on a balmy January day, to gather in the Great Hall.  (Many were delayed, in entering the State House, by a malfunctioning metal detector at the main entrance—leading some to joke that the Walk to the Hill crowd had broken it by dint of their sheer numbers.)  It is said that this is the largest annual advocacy event of its kind in Massachusetts, and that tremendous turnout, year after year, has helped build a solid base of support among Senators and Representatives.

You can see the effect of that support reflected in the numbers: Over the past two fiscal years, the Massachusetts Legal Assistance Corporation (MLAC), the state’s largest provider of funding to legal-services organizations throughout the Commonwealth, has seen its line-item in the state budget grow by 20%, from $15 million to $18 million—even at a time of great fiscal constraints, when most other line-items are growing much more slowly, if at all. 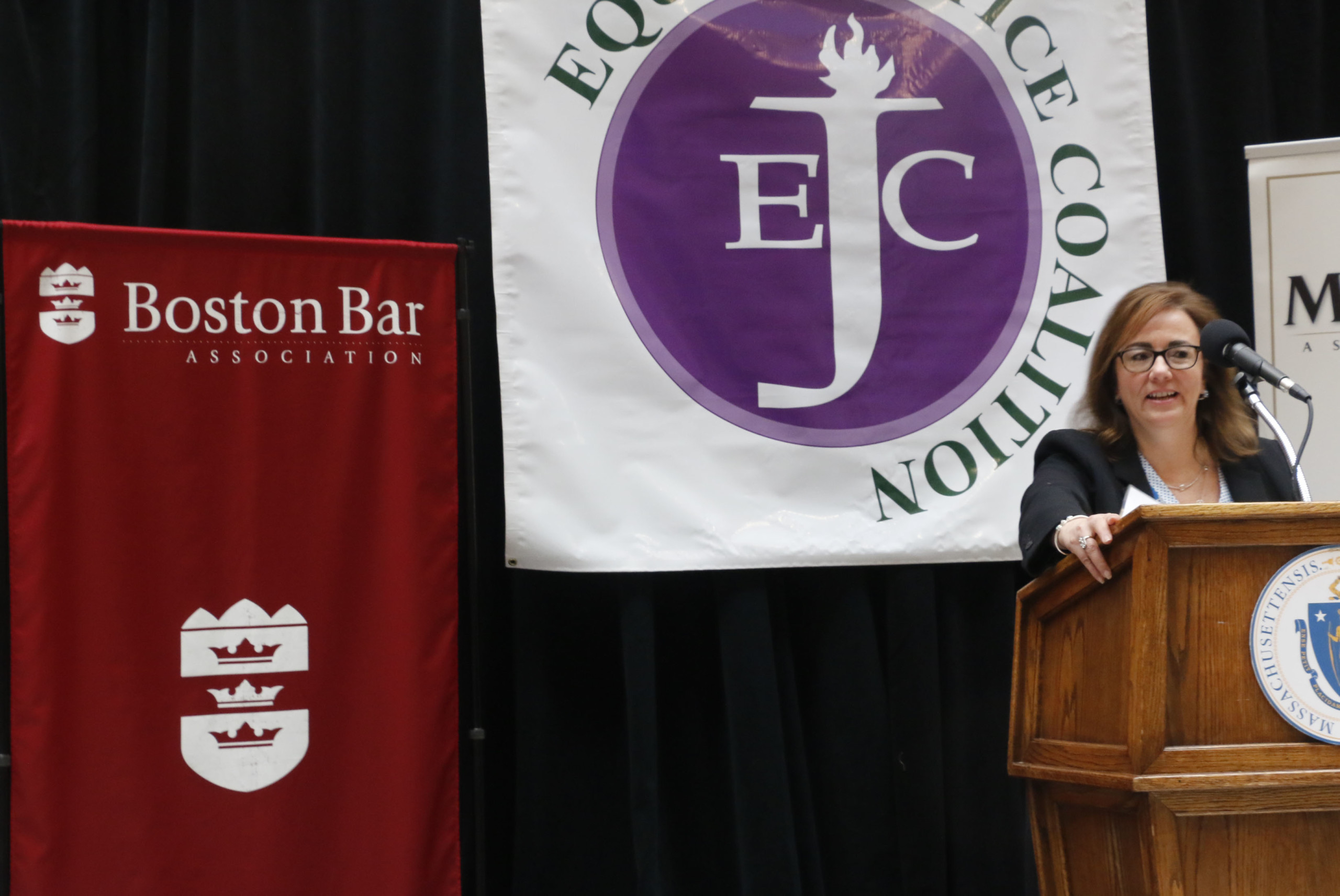 Another reason for that increase?  The BBA’s own Investing in Justice report, which demonstrated in 2014 the positive return on investment the state achieves from civil legal aid.  For example, for every $1 spent helping fight against wrongful evictions and foreclosures, Massachusetts saves $2.69 in shelter, health care, foster care, and law enforcement costs.  In addition, every $1 spent on legal aid for survivors of domestic violence results in $2 in medical and mental health care savings, and every $1 spent on legal aid attorneys working to secure federal benefits yields $5 in federal economic benefits to Massachusetts residents.  That report was the culmination of the hard work of our Statewide Task Force to Expand Civil Legal Aid in Massachusetts, as well as the three independent economic consultants who conducted the underlying analysis.

That report has been the foundation for advocacy ever since, and BBA President Carol Starkey reminded those in attendance of its key findings—and of the “necessity for all of us to come together to help low-income families and individuals.”  Civil legal aid, she said, “helps keep the basic, fundamental promise of justice for all of us—not just a few of us.”  And she warned that advocates may soon have to fight off proposals at the federal level to slash funding for legal aid, including for the Legal Services Corporation, the nation’s leading provider of money for legal aid. “At the Boston Bar Association, we’re ready to fight,” President Starkey pledged.

SJC Chief Justice Ralph Gants always addresses the audience at Walk to the Hill, usually bringing the majority of the high court with him, and this year was no exception.  To the question of why legal aid deserves to continue receiving significant increases in funding, he suggested responding, “We expect the coming year to present unprecedented challenges to the rule of law and to the health and well-being of the poor and the vulnerable.”

Chief Justice Gants delights every year in finding a new data point to illustrate just how small the state’s appropriation for civil legal aid is, in the context of a $40 billion budget.  Perhaps spring training is already on his mind, because this year’s example came by way of the hometown first-baseman’s contract: “That fight will cost just $23 million—which is roughly what the Red Sox are paying Hanley Ramirez this year.”

The President of the Massachusetts Bar Association, Jeff Catalano, said, “This is not just a walk for funding; this is a walk for justice.  Because a society where poor people can’t get access to legal representation to assert their rights is truly not a just society.”

MBA President Jeff Catalano:
“This is not just a walk for funding; this is a walk for justice.”

Finally, the crowd heard from a legal-services client, Bill O., who told the compelling story of how his attorney at Greater Boston Legal Services (GBLS) restored his MassHealth coverage, which was taken away at a time when he was battling a life-threatening illness.  “It was like a miracle,” Bill recalled, “because I could not afford those incredibly-expensive drugs on my own.  And I was so, so relieved, it was physical.”  There was no way, he said, that he could’ve achieved the same result himself—no way he could’ve sifted through all the paperwork, in spite of a career spent in health-care.  Bill told the hushed crowd, “I wouldn’t be standing here today, I don’t think, telling this story, if it weren’t for the help of Nancy and GBLS.”

After that moving and energizing kick-off ceremony in the Great Hall, the 700 lawyers-turned-activists took their marching orders from Jacquelynne Bowman, executive director of GBLS, and filtered out to offices all over the State House, to spread the word to their respective legislators and make the ask: a requested $5 million increase in MLAC funding, to $23 million.  Among the many, the two bar presidents, Carol Starkey and Jeff Catalano, happen to be represented by the same State Senator, Michael Rush, who raced back from a Senate session to sit down with them as they asked for his help in securing that $23 million.

That’s still not enough, unfortunately, to entirely close the gap identified by the BBA Task Force, with an estimated 64% of qualified applicants for legal assistance turned away by providers solely due to lack of resources.  But it would be a big step.  And for those thousands of additional clients who could be represented if that money comes through, it may mean being able to stay in their homes, escape from an abuser, or gain the federal benefits to which they’re rightfully entitled.  That’s why we come back each year—to fight for help for those who need it the most.

And make no mistake: it will be a fight once again.  Walk to the Hill typically arrives toward the start of the budget cycle, and this time it was one day after Governor Charlie Baker released his budget proposal for Fiscal Year 2018 (FY18), which begins on July 1.  The Governor’s plan, delivered to the Legislature as House Bill 1 (or “H. 1,” as it’s affectionately called), would set the MLAC appropriation at $18.18 million, or 1% above last year’s level—likely not enough even to maintain the same level of legal services as this year.

But the ball is now in the Legislature’s court.  The House Ways & Means Committee is already working on the numbers for their budget, which will be released in April.  (For more on the budget process in general, and how it affects our lobbying for MLAC, check out our recent podcast, with the unfortunate—but nevertheless accurate—title “Geeking Out on the State Budget.”)  You will certainly be hearing more from us in the months to come about MLAC and our other budget priorities…