Taking on Tough Issues: Chief Justice Gants on the Judiciary 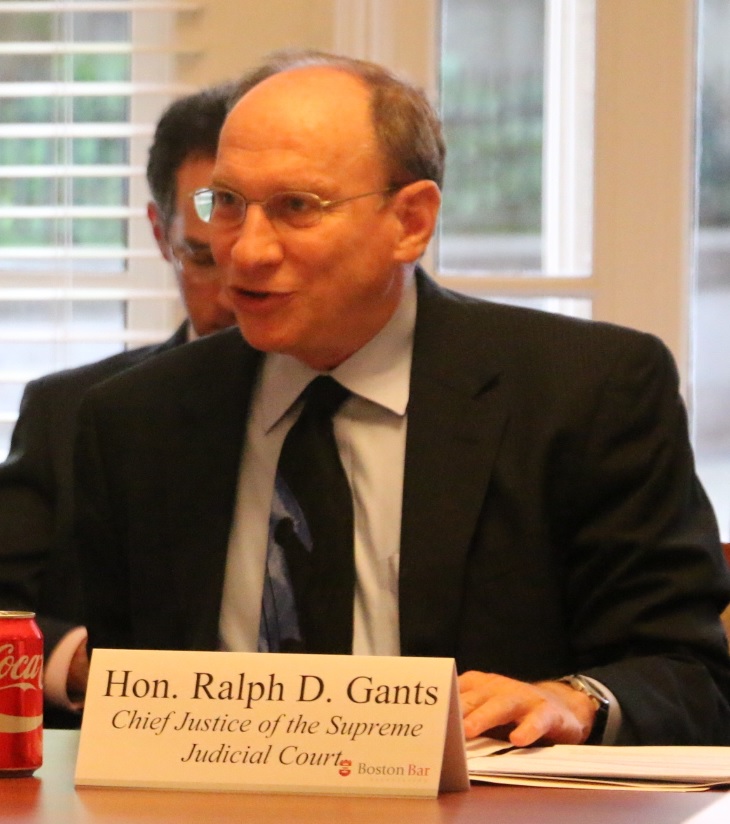 We recently had the pleasure of welcoming the Chief Justice of the Massachusetts Supreme Judicial Court (SJC), Ralph D. Gants, to our building.  He addressed members of our Council, speaking on a myriad of issues currently facing the court system and the state at large.  We’ve got the recap below, but we also invite you attend the upcoming Haskell Cohn Award ceremony, at which we will be honoring the Chief for his distinguished judicial service.

Known for going out into the community to teach people about the Massachusetts courts and the practical role that they play in our lives, Chief Justice Gants has long demonstrated that he cares deeply about ensuring that the justice system works for everyone. He has actively worked to leverage limited resources wisely and to inspire the commitment of new resources to promote that goal.

Since his appointment to the bench as a Superior Court Judge in 1997, Chief Justice Gants has earned a reputation for scrupulous analytic rigor, intellectual honesty and fairness. Prior to his elevation to the SJC in 2009, he was a strong leader of the Business Litigation Session. Throughout his judicial career, and especially since his appointment as Chief Justice of the Supreme Judicial Court in 2014, he has consistently shown a laser like ability to focus on the core issues in even the most complex of cases. He neither shies away from nor glosses over the most difficult issues, but rather grapples with them openly.  This includes access to justice and pro bono legal service – Chief Justice Gants is a former Chair of the Massachusetts Access to Justice Commission and member of the SJC’s Standing Committee on Pro Bono Legal Services.  In 2012, the BBA recognized him with the Citation of Judicial Excellence.

Here are some of the issues he addressed in his speech:

Chief Justice Gants began with some news on the budget.  He analogized the budget process to a baseball game, stating that we were in the later innings and had scored some runs, but still had some more innings to go and work to do to convince legislators of the judiciary’s funding needs.  He acknowledged how challenging the budget situation is; even though the state economy appears healthy by many indicators, most revenue gains are already spoken-for due to constant growth in certain key areas such as health care.

As it currently stands, the Governor, House, and Senate have all released their budget proposals.  A conference committee will shortly be addressing differences between the House and Senate proposals.  Here is a brief breakdown of the line items we are most interested in:

Click here for a full analysis of all our budget priorities.

Chief Justice Gants then discussed reforms currently under consideration for both civil and criminal practice.  Following his lead on the need for  a “menu of options” in civil litigation, each department of the Trial Court (aside from the Juvenile Court), examined their civil practices, and most are in the process of finalizing streamlining proposals that will give lawyers more practice options.  However, the Chief Justice stressed, giving lawyers more choices matters only if lawyers actually take advantage of them.  He encouraged lawyers to try out the new options when they are implemented and hoped that practitioners would be pleased with the outcomes – fair and fast resolutions of their cases on the micro level, and a more efficient court system on the whole as a result.

Once this is accomplished, it may lead to larger systemic changes.  For example, the Trial Court is examining increasing the minimum procedural amount to qualify for Superior Court from $25,000 to $50,000.  This change would approximately represent an adjustment for inflation (the amount has stayed the same since 1986), but would also result in shifting a large number of cases from the Superior Court to the District Court level.  Implementation of this change is currently on hold, at least until devoted civil sessions in the District Courts are operating at peak efficiency.

On the criminal front, the Chief Justice spoke highly of the work of the Council of State Governments, which is examining criminal justice policy in Massachusetts at the joint request—and with the guidance—of  the Chief Justice, the Governor, the Senate President, and the Speaker of the House.   The Council will be making recommendations for criminal justice reforms in the Commonwealth in the coming months.

Chief Justice Gants has already taken the lead on this issue in the judiciary, installing best practices for sentencing in all criminal courts.  He explained that going forward, the judiciary is looking more closely at issues such as sentence length and post-release conditions (currently about 40% of people are released from prison without any form of supervision), as well as tailoring sentences individually for each defendant.  The court is also focused on monetary issues, such as determining individuals’ ability to pay court fees and increasing the baseline amount for certain crimes, such as larceny, to qualify as a felony.

Finally, Chief Justice Gants addressed his work with the Conference of Chief Justices, which recently adopted a resolution as part of a national effort to achieve “100% access to justice.”  While that phrase can mean many things, Chief Justice Gants is focused on maximizing both legal and non-legal resources so litigants can get the help they need, from self-help forms, to brief advice, to full representation from a lawyer, depending on the individual’s abilities and the complexity of their issue(s).  The biggest current challenge is figuring out how to allocate resources to achieve the most effective “triage.”  Other states are working to address the same questions, and he hopes we can benefit from some of their research and innovations.  Meanwhile, Massachusetts remains a leader in access to justice – as recognized by the National Center for Access to Justice’s recently-released 2016 Justice Index, which ranks us second only to the District of Columbia – and continues to expand empowering programs and initiatives, such as opening more Court Service Centers in courts across the state.

As always, the Chief Justice demonstrated his deep knowledge of the courts and justice system at large as well as his energetic push for meaningful and beneficial reforms to assure efficient practice and access to justice for all.  We are extremely pleased to be honoring him at next week’s Haskell Cohn ceremony and hope that you will join us in recognizing his remarkable and ever-increasing achievements.