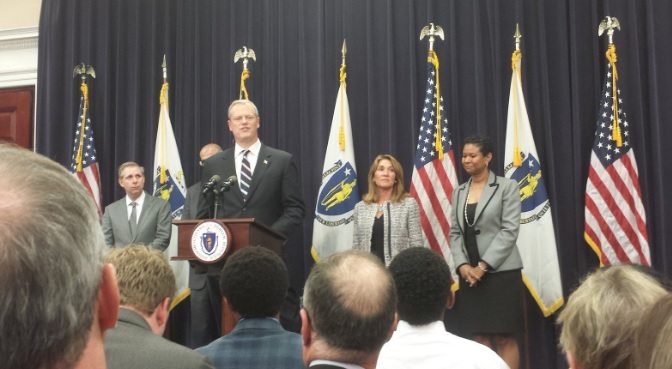 It’s been quite a week, with major implications for justice in the Commonwealth for years to come, as the Governor announced his three nominees for upcoming Supreme Judicial Court (SJC) vacancies on Tuesday.  The SJC is not only the highest appellate court in the state, issuing approximately 200 full bench written decisions and 600 single justice decisions annually, but its justices are also responsible for the “general superintendence” of the judiciary and the bar.  This function includes making, revising, and approving rules for the operations of the courts and providing advisory opinions to other branches of government.  For example, over the past few months, the BBA has taken part in commenting on proposed revisions to civil procedures for various court departments aimed at improving the cost-effectiveness of litigation.  This overhaul originated with the SJC and final revisions will be approved by an SJC led committee before being codified.  It is all but impossible to overstate the huge role this court plays for justice and legal practice in Massachusetts.

Therefore, it is truly remarkable that this Court will be going through such a major change in its makeup in so short a time.  With five of the seven justices leaving by the end of next year, the first three replacements are only part of the picture.  The justices leaving before the court’s next session in September are Robert Cordy, Francis X. Spina and Fernande R.V. Duffly.

Of the seven current SJC Justices, Spina and Cordy are the only two who were nominated to the SJC by Republicans (both by Paul Cellucci).  Obviously that is going to change soon as Republican Governor Charlie Baker starts to shape the court.  His three nominees to fill these spots are all former prosecutors and current Superior Court judges, Kimberly S. Budd, Frank M. Gaziano, and David A. Lowy.

These three nominees emerged thanks to the hard work of a special 12-member Supreme Judicial Court Nominating Commission (Special JNC) established by the Governor in February to assist the current Judicial Nominating Commission (JNC) in vetting all of the SJC applicants and nominees.  BBA President Lisa Arrowood is a member of this panel along with a number of former BBA leaders.  The Special JNC is co-chaired the Governor’s Chief Legal Counsel Lon Povich and former BBA President Paul Dacier, who is also chair of the JNC and executive vice president and general counsel of EMC Corporation.  The other members include:

We have explained the JNC before, but, to briefly review, the JNC is a group of diverse individuals appointed by the Governor (the regular JNC has 21 members, while the Special JNC has 12), with great knowledge and experience with the court system.  Members of the bar must have at least seven years of practice experience.  The JNC provides a first layer of review for judicial nominees – identifying and inviting applications by qualified individuals, reviewing applications, and interviewing candidates.  The group conducts votes requiring an increasing number of approving Commissioners at various steps of the process, narrowing down the list of individuals until a final vote requiring a 2/3 majority is conducted to see which applicants’ names will be submitted to the Governor for consideration for nomination.  They typically provide between three and six candidates for each vacancy.  The Governor’s Office then selects its candidates, here, Budd, Gaziano, and Lowy.

The next step is approval by the Governor’s Council, a group of eight individuals elected every two years and the Lieutenant Governor, who serves ex-officio as president of the Council.  The Councilors review the nominee’s backgrounds, interview them, and hold open hearings where their supporters and opponents have the chance to speak.  The three candidates have already been approved by past iterations of the Council as they are all currently on the bench, but nothing can be taken for granted.

The schedule for nominee hearings is set and we look forward to keeping you updated on their progress.  The hearings are all at 9:00 am in Room 428 of the State House as follows:

Finally, keep in mind that this is only the beginning.  The SJC overhaul continues next year as Justices Margot Botsford and Geraldine Hines will both reach mandatory retirement age, Botsford in March and Hines in October.  While we don’t know who will come to the fore as nominees then, a couple of qualifications to look for include:

Throughout this process, the Governor has frequently repeated that he is simply looking for the best candidates.  He and his office continue to encourage strong candidates to apply and are committed to continuing the remarkable traditions of the SJC.  However, the maintenance of a great and diverse bench relies on a great and diverse candidate pool.  The Governor has done his part by creating a remarkably diverse JNC and Special JNC under all metrics from geography to demographics to practice field and size.  It is up to candidates now to apply.  We look forward to seeing what the state’s highest court looks like at the end of this process.