Last week, the BBA Council was honored with the presence, at their monthly meeting, of Chief Justice Ralph D. Gants of the Supreme Judicial Court (SJC), who spoke on matters of importance facing the state courts.  As a matter of practical concern, the judiciary budget is always on Chief Gants’s mind, and that was certainly the case at this presentation.

The debate on the Fiscal Year 2019 (FY19) budget formally began last month with the filing of Governor Charlie Baker’s proposal, known as House Bill 2 (or H. 2).  The court system had requested a 2.2% increase this year for maintenance-level funding, which does not include the cost-of-living increase demanded by the unions with which the courts are currently bargaining.  What the Governor has suggested amounts to a 1.8% increase—$3.4 million short of their goal, but still the best starting point that the Chief Justice says has seen in his three-and-a-half years in that position.

However, he noted that the court system is still seriously short-staffed, particularly with regards to probation and courthouse security.  He said his highest priority is hiring more probation officers, especially as the courts are now asking them to be more involved in helping judges craft sentences, providing resources on diversion programs and pre-trial release, and spending more time with individuals suffering from mental-health and substance-use problems.

He said that apart from the maintenance budget, the courts were seeking funding for several modules, including for the specialty courts; for a program to address racial bias in the court system; and for an effort to create a triage program in the Family Court, which would provide initial case management in order to seek alternative resolutions that don’t involve litigation.  Chief Justice Gants noted that the Governor’s proposed budget would fund the Housing Court module, but would do so by taking it out of the rest of the Court’s budget.

On criminal-justice reform—another priority of both the Chief Justice and the BBA—he said that, with the omnibus legislation pending in the State House now in a conference committee, where discussions are being kept confidential, he remains a spectator like almost everyone else.

Chief Justice Gants said that a key area in which the BBA could offer assistance is in advocating for reform to mandatory minimum sentences, to which some of the Commonwealth’s District Attorneys object.  Chief Justice Gants noted that both proposed bills before the conference committee offer some reform in this area, with the Senate’s bill going further than the House’s.  For example, the two bills differ with respect to whether or not separate mandatory minimums for dealing drugs in school zones should be maintained.  Chief Justice Gants noted that there is another stand-alone crime for selling drugs to minors, and that he believes the mandatory minimum sentence should be removed, telling the Council he’s never seen an appropriate case for a separate school-zone charge—one which is used only as leverage in plea negotiations.

He expressed his concern about racial disparities in sentencing, particularly for drug crimes with mandatory minimums.  As he reminded the Council, each department of the Trial Court with criminal jurisdiction has recently developed best practices for sentencing, which the Court is now training judges and probation officers on. 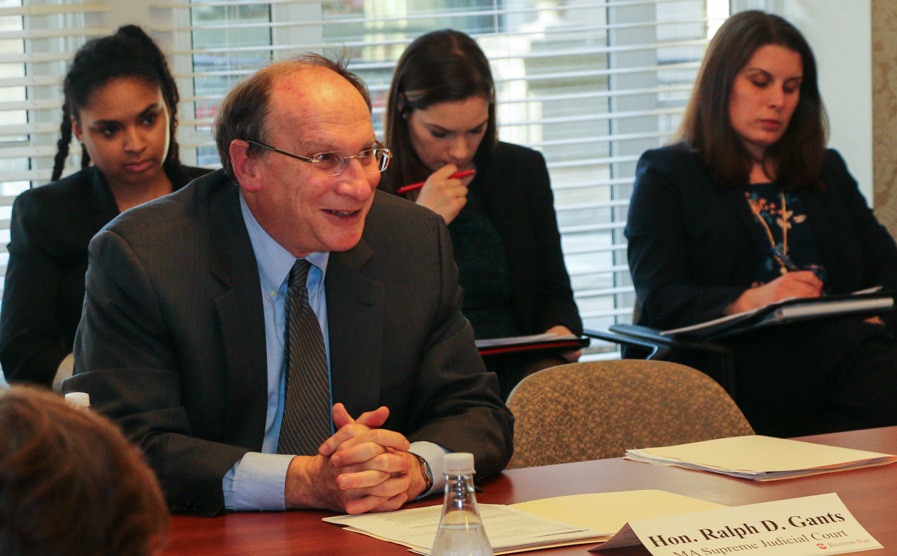 Another area where Chief Justice Gants and the BBA both lobbied the Legislature is the statewide expansion of the Housing Court.  That effort produced results last year, effective July 1, 2017, and the build-out is well underway.  He said that the Court is in the process of staffing the expansion, and that there would be a new Metro-South division, to be based in Brockton (with discussion ongoing in the hope of opening a housing session in Framingham), while Cape Cod and the Islands would be incorporated into the Southeast Housing Court.

Returning to an issue that has been much in his thoughts of late, Chief Justice Gants said that of the seven Trial Court departments, the Family Court is currently under the most stress.  He noted that this was the department with the second highest percentage of pro se litigants (after the Housing Court), and that the matters litigated in this court are often complex and emotionally taxing.  Furthermore, unlike in other courts, “it’s always Groundhog Day”: Even after a case is closed, the parties often return to court seeking modifications in their situation.  Finally, written decisions in this court are required by law, meaning that judges in the Family Court have a heavy load of writing.  He said that he had asked retired SJC Justice Margot Botsford to study problems in the Family Court and consider what could be done to address them.

Another issue making the Chief Justice uneasy at the moment is the dearth of lawyers to take on care-and-protection cases in the Juvenile Court, particularly in Western Massachusetts.  He said that in cases where the Department of Children & Families seeks to remove a child from the parents’ custody, they have the right to a hearing within 72 hours.  If the parties are indigent, both parents and the child have the right to state-appointed counsel.  However, Chief Justice Gants said that as of October, approximately half of the mandatory hearings in the western part of the state were being postponed, often for one to two months, due to lack of counsel.

Chief Justice Gants expressed his deep concern about this problem, saying that it is unacceptable that people’s rights are not being met due to lack of access to counsel.  He noted that some attempts had been made to address the problem; the Legislature temporarily increased the hourly rate for attorneys in these cases to $75 per hour once 350 hours of casework have been completed, and judges now mention the importance of doing this type of work at all new-lawyer swearing-in ceremonies.  However, it is sometimes difficult to interest attorneys in taking on these cases, as they take place in a closed courtroom, without the opportunity for professional publicity, and can be emotionally draining.  Chief Justice Gants expressed his commitment to solving the problem, saying that the state should not set a precedent of allowing people’s rights to be violated due to lack of counsel.

Chief Justice Gants also said that each court with civil jurisdiction had created a menu of options for alternative dispute resolution—an undertaking he spearheaded, and to which the BBA contributed.  He encouraged Council members to spread the word to colleagues and clients that these options are available.

Chief Justice Gants also mentioned that he was troubled by a recent American Bar Association report on lawyer and law-student well-being, which showed that a disproportionately high percentage of third-year law students experience depression compared to the general population, and that lawyers have one of the highest suicide rates of any profession.  He noted that lawyers and law students may hesitate to seek mental health assistance, especially as in some states mental-health concerns can preclude bar candidates from passing the character-and-fitness test.  He also observed that the bar as a whole may be less community-oriented than it used to be, and that in general people are becoming increasingly isolated due to changes in technology.  He said that he was considering whether the Massachusetts courts should do anything to address this problem.

Finally, Chief Justice Gants spoke about the Massachusetts Access to Justice Commission, which he co-chairs with Susan Finegan of Mintz, Levin, Cohn, Ferris, Glovsky and Popeo, P.C.  He said that the Commission had created the Massachusetts Justice for All Strategic Action Plan with the help of a grant from the Justice for All project, and that the report was available for viewing on the Commission’s website.  He noted that the report focuses in particular on debt collection, housing, and the Family Court, and said that the Commission will likely seek additional grants to help implement access-to-justice solutions in these areas.  He said that the state cannot continue to rely solely on legal aid organizations to provide access to justice, noting that the Legal Services Corporation is chronically underfunded and that its budget is particularly threatened under the current federal administration.  He said that the Commission hoped to create a virtual court service center, and that he hoped to draw other agencies, such as public libraries and social services organizations, into the process.

In response to a question, Chief Justice Gants said that the annual cap on hours for private attorneys handling care-and-protection cases through CPCS had been raised a few years ago from 1,650 to 1,800 hours per year, if CPCS finds that certain conditions are met.  (Just recently, a special temporary exemption was added by the Legislature, allowing for a 2,000-hour cap in Hampden County only, where the need is most urgent.)  He said that he didn’t think it would be helpful to raise the cap further, especially as lawyers taking on these cases might not have the appetite to do more hours.  Instead, he hopes more lawyers will get involved.

A Council member brought up the issue of pathways to judgeships for women and minorities in the state, particularly as it is increasingly difficult for attorneys to get trial experience, which can pose a barrier in the judicial nominating process.  Chief Justice Gants acknowledged that the number of female judges and judges of color in the state is declining, despite efforts by many, himself included, to increase diversity.  He said that ahead of the annual Bench-Bar conference in April, court leaders will meet with the affinity bar associations to discuss leadership development and pathways to judgeship.  He noted that the Governor’s Council does consider trial experience to be an important element in selecting judges, but agreed that it is hard to get this experience, particularly for attorneys in large firms.  He noted that state court judges don’t typically approach counsel to ask them to undertake individual cases, as federal judges often do.  He also said that a disproportionate percentage of incoming judges are former District Attorneys or public defenders, and that this is not ideal, as it is important to have a diversity of practice setting experience among judges.  He encouraged Council members to share their thoughts with the Court and other stakeholders as to how the pool of candidates for judgeships could be broadened.

We’re always pleased to welcome the Chief Justice to Council—and to share his report with you here.