In July, the BBA Council was honored to be joined by Sir John Gillen, a retired Lord Justice of Appeal of Northern Ireland, who was recently tapped to conduct a comprehensive review of the handling of serious sexual crimes by Northern Ireland’s legal system. The review originated following a controversial, high-profile case involving two professional rugby players, which highlighted the problems with the process of trying these cases. As part of the review, Sir John is examining the laws of 13 other countries, including the United States, and we were grateful to be a part of the process during his Boston stop. 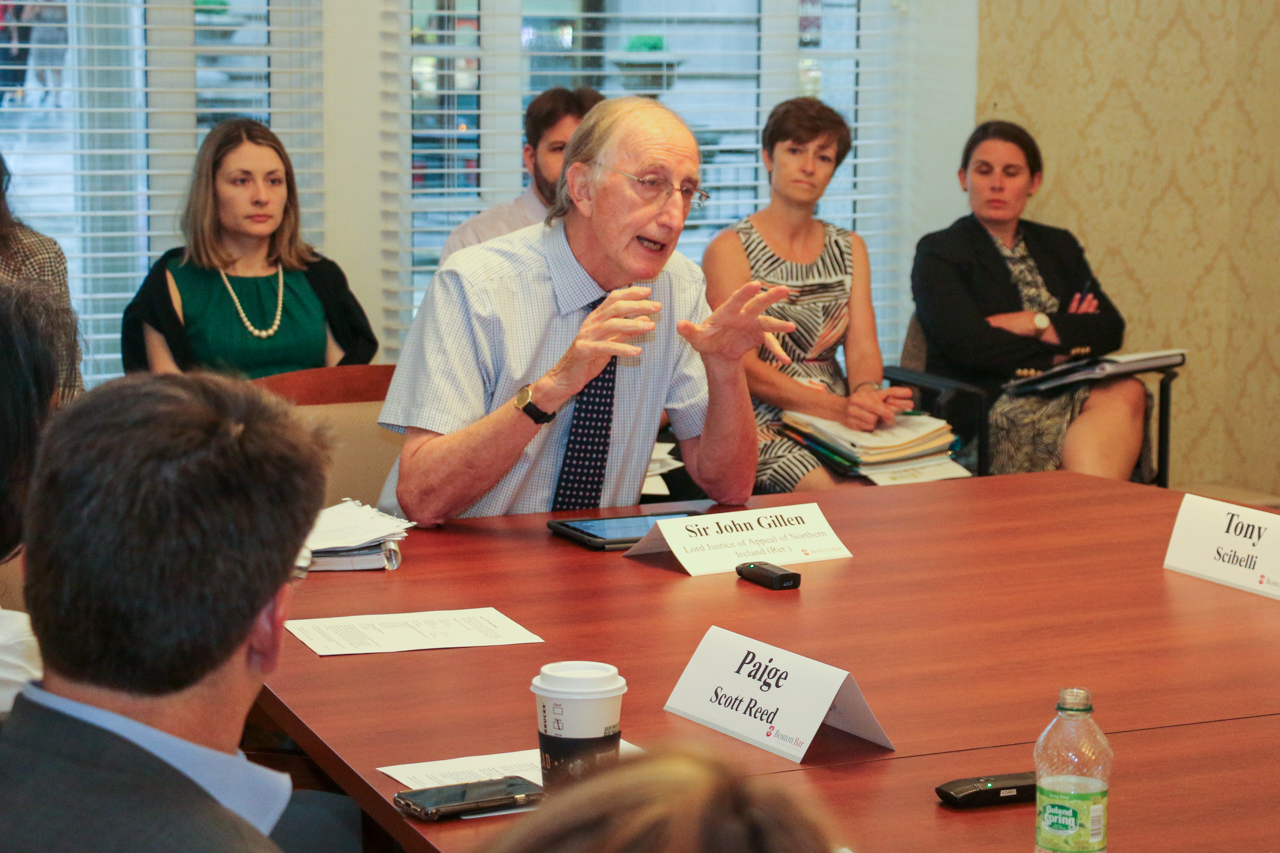 Earlier in the day, Sir John had met with several judges and prosecutors, as well as a group of practitioners representing both victims and defendants, convened by the BBA. At the Council meeting Sir John offered an overview of his work, which he is undertaking with a team of seven staff members and an eleven-person advisory panel made up of academics, lawyers, and representatives from survivors’ advocacy groups.

Sir John noted that in Northern Ireland, less than 6% of people who complain of serious sexual offenses see a conviction of the alleged perpetrator and that these cases have a 45-50% conviction rate when they actually go to court, much lower than the 87% conviction rate for non-sexual offenses. He said that 44% of complainants (79% of whom are women, and 21% of whom are men, on average) drop out because of the daunting nature of the legal process. He also noted that an estimated 60% of sexual assaults in Northern Ireland are never reported. In his view, these statistics reveal that, in addition to legal and procedural changes, a radical cultural shift is needed.

In addition to looking at measures and reforms adopted in other jurisdictions, Sir John said that he had interviewed 20 complainants in these cases about their experiences with the legal system, and hoped to interview at least 20 more. Sir John said some areas he was examining as he crafted his recommendations included: whether modifications needed to be made to the concept of open justice and open courts in sexual assault cases, particularly in the social media era; the role of anonymity for both the complainant and the accused in these cases; the problem of juror bias, including with regards to the prevalence of rape mythology and a lack of common understanding of the concept of consent; the possibility of introducing an option for pre-recorded evidence, particularly in cases involving children; areas for tightening rape shield laws; the possibility of mandating the right to legal representation for complainants in sexual assault cases; and the introduction of government-funded public education campaigns to inform people about consent and to challenge common misconceptions about sexual assault.

In response to a question by a Council Member, Sir John also noted the role of education, saying that proper training for jurors, judges, and both prosecutors and defense attorneys would be essential to improving the system. He also said he was continuing to learn more about the use of alternative resolution mechanisms, like those used at many American universities.

As mentioned, we at the BBA are very pleased we had the chance to convene a group of experts to discuss Sir John’s review, and we’ll be sure to keep you posted on the final report.