Repairing the World through Judicial Innovation and Evolution

On Tuesday, Chief Justice Ralph Gants gave his annual State of the Judiciary Address at the MBA’s Bench Bar Symposium in the Great Hall of the John Adams Courthouse.  Attendees such as Speaker of the House Robert DeLeo, Judiciary Committee Co-Chairs Representative John Fernandes and Senator William Brownsberger, Attorney General Maura Healey, Governor’s Chief Legal Counsel Lon Povich, and a host of SJC Justice and Chiefs of the Trial Court departments were there.

Chief Justice Gants began with high-minded principles.  He explained that he sees every court – not just specialty courts — as a problem solver, which he defines as meeting an obligation to repair the world, an obligation met by saving even one life.  No one, he noted, comes before our courts unless they have a problem that cannot otherwise be amicably resolved.  All courts seek to repair the world, one problem at a time – a task that can be accomplished only with the support and assistance of the two other branches of government. 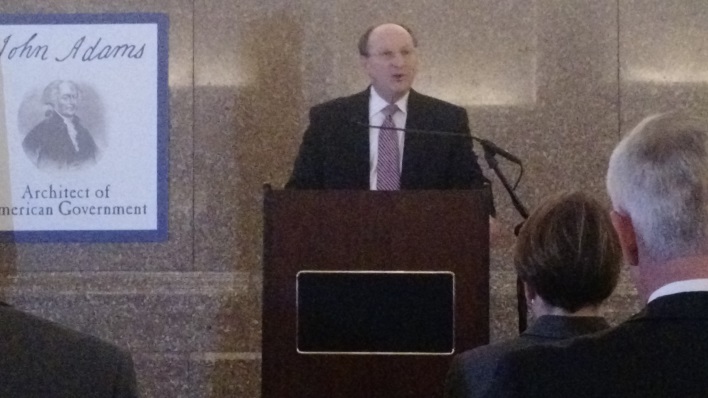 The Courts are intent on changing civil cases, making them more affordable and cost efficient at all levels.  “Slow, expensive litigation,” he said, “is the way of the dinosaur.”  Three changes are coming this winter:

The Chief Justice shared a number of ways the courts are working to improve criminal practice, with a focus on decreasing recidivism, helping individuals become productive members of society, and using the state’s criminal-justice budget more wisely to help achieve these twin goals.

Chief Justice Gants ended his speech with some notes on access to justice and jury voir dire.  On the former issue, he touted the recent opening of four Court Service Centers and the adoption and beginning implementation of a language access plan to help non-English speakers understand court processes, forms, and procedure.  The Courts are constantly exploring ways to assure that everyone can meaningfully access their services.

Finally, he talked about how the SJC responded to the bar with the adoption of attorney voir dire.  We were pleased to be involved in this process, as current BBA Vice-President Mark Smith, Laredo & Smith, LLP, served on the SJC Committee on this issue.  Over the past year, the Court issued a standing order governing lawyer participation in voir dire and designed a pilot project on panel voir dire, which is in use by 15 Superior Court judges.  They also recruited 30 Superior Court judges to study attorney-conducted voir dire.  The Courts have trained judges and gathered data on the impact of the new measures.  In all, the Courts continue to develop, grow, and adapt to this new aspect of practice.

As always, Chief Justice Gants clearly has his finger on the pulse of the judiciary.  We are excited to learn of the changes that are coming and to reflect on the strides the Courts have made in the last year.  We look forward to working with the judiciary to bring the Chief’s visions to reality, as the Courts innovate and thrive.