Raising and Revising the Bar 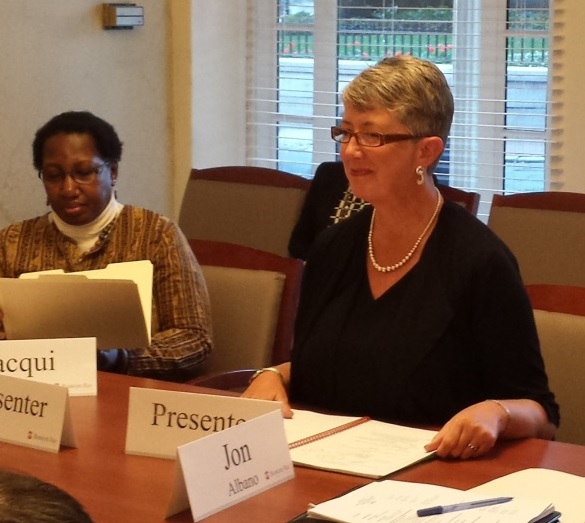 We were pleased to have Marilyn Wellington speak to our Council last week about her role as Executive Director of the Board of Bar Examiners (BBE) and how her agency is changing.  The BBE is tasked with being a gatekeeper for admission to the bar in Massachusetts.  As Wellington explained, this is largely a public protection function – to assure that anyone licensed to practice law in Massachusetts meets our high standards for competency and character and fitness.  To achieve these ends for the roughly 2,500-3,000 applicants each year, the BBE administers the bar examination, considers each applicant’s character and fitness, and also reviews the qualifications of several hundred lawyers trying to waive-in from other states.

The BBE Board consists of five members who oversee their policies and processes and also draft the essay questions used in the bar examination.  Board members are geographically diverse and serve five-year volunteer terms.  They are all experienced lawyers with decades of practice in Massachusetts, devoting a significant amount of time to maintain the high caliber of lawyers permitted to practice in the Commonwealth.

After explaining the BBE, Wellington went on to discuss an issue that has been occupying the bar’s attention – bar passage rates.  She reported that the passage rate has dipped in Massachusetts, though less dramatically than it has nationally.  Some explanatory charts are below and law-school specific data is available here.  Note that, at the same time, scores on the Multistate Bar Exam continue to be higher for Massachusetts test-takers than the national average. (Click on the image to enlarge) 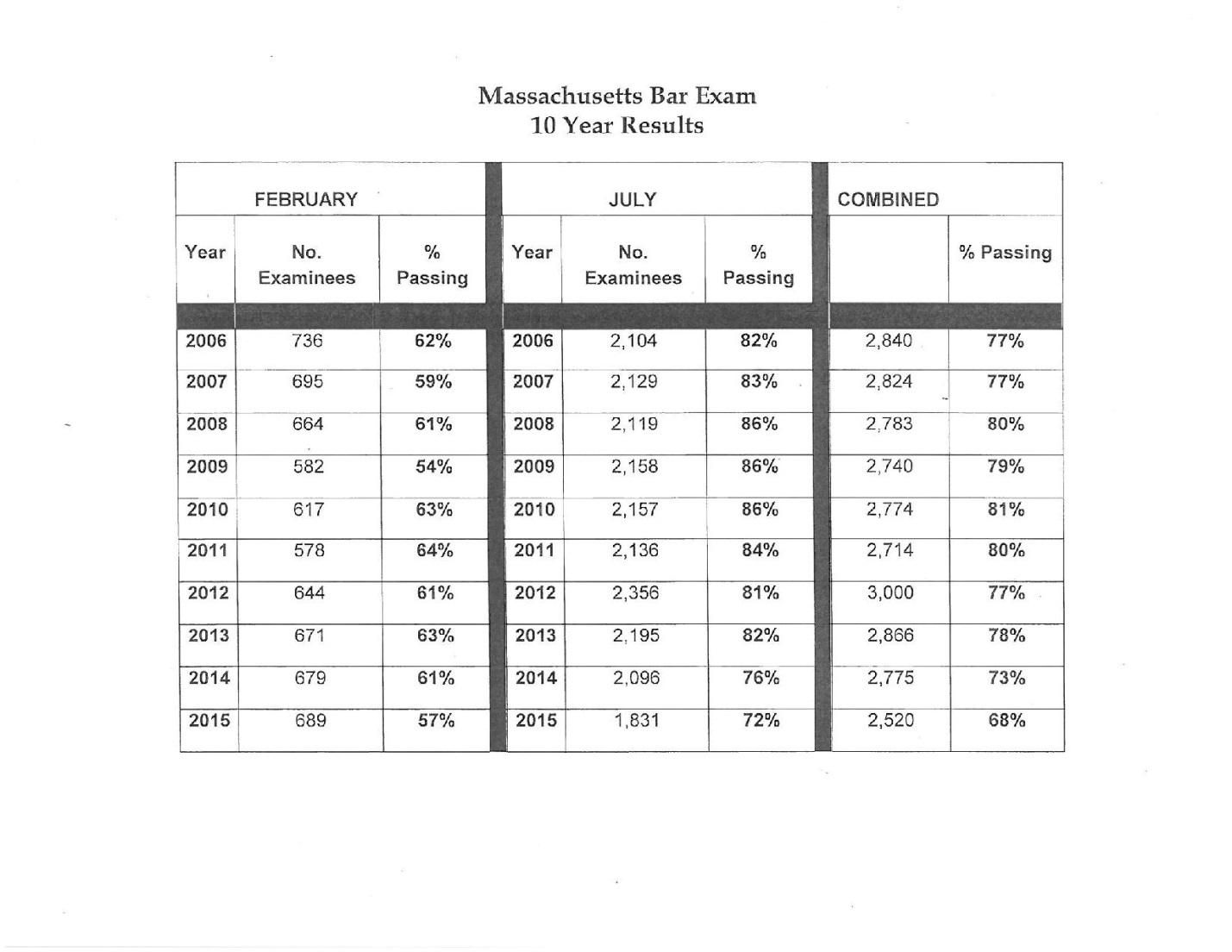 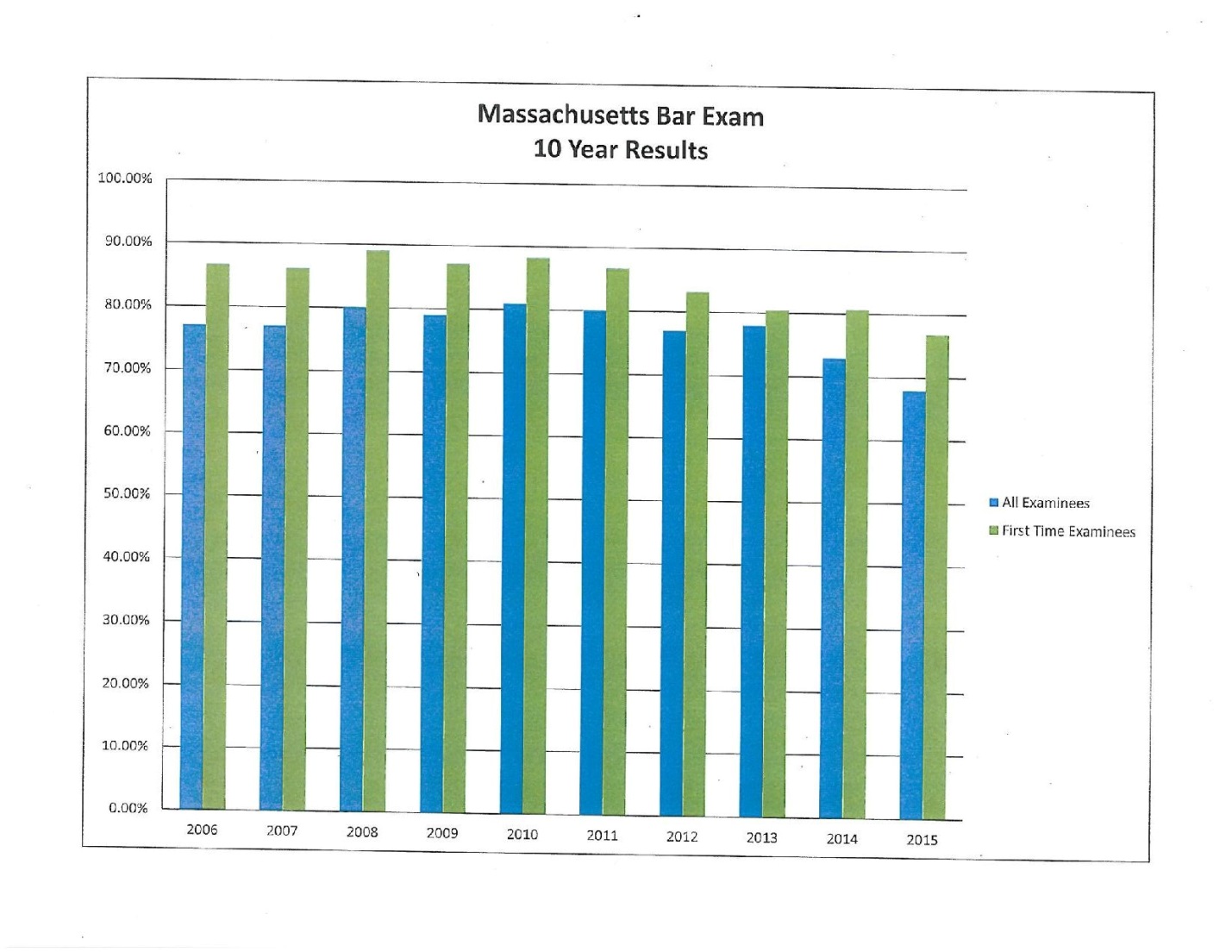 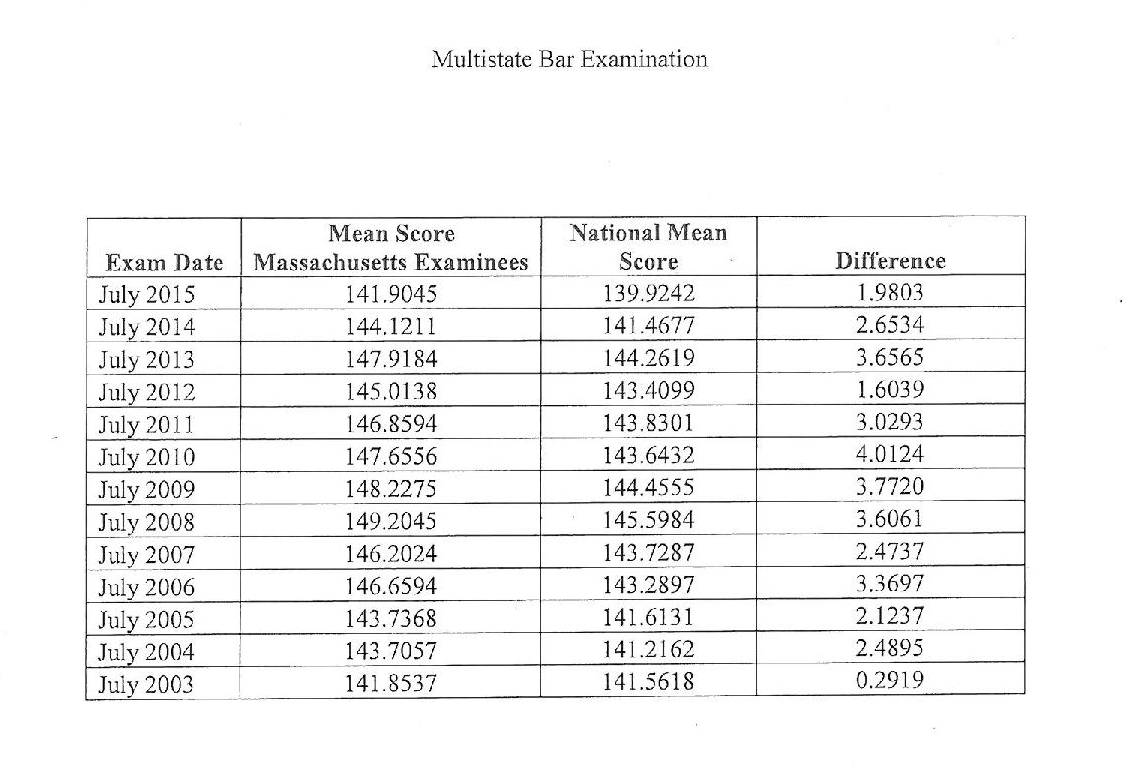 While some have been quick to trace this trend back to a possible decline in the caliber of law school graduates, Wellington was clear that, at most, this cause is one of a multitude of factors.  She explained that another factor may be recent changes in law school curricula.  As firms and clients have pushed for more practice-ready lawyers, law schools have increased practice-style courses and clinics, perhaps at the expense of traditional courses teaching the core principles tested on the bar exam.  This is a fascinating and challenging issue, and one in which the BBA is particularly interested.

The BBA is hoping to do its part to help prepare lawyers for practice and has become increasingly active toward this goal, having recently partnered with all five Boston area law schools, welcoming their students to learn and network at the BBA.  In addition, as you may have heard, BBA President Lisa Arrowood is committed to enhancing lawyer practice readiness and has been the force behind the creation of our Friday Fundamentals programs.  These classes focus on essential skills in core elements of specific practice areas.  They are designed to introduce subject matter to newer attorneys and challenge experienced practitioners who may be looking to review or expand their expertise.

Wellington then spoke on reforms being considered by the BBE.  First, they are considering switching to the Uniform Bar Exam (UBE), with the help of a court appointed committee that includes BBA representative Wayne Kennard, WilmerHale.  The 19 member committee includes representatives from eight Massachusetts law schools, the court, the bar, and the BBE.  They are also looking at a number of programs nationally surrounding bar examination such as the new pro bono requirement in New York and accelerated bar exam programs in place in a number of other states.

The UBE is a two day exam featuring “portable scores,” meaning test takers can bring their scores to other states that use the exam.  It does not test any local law and one portion is a legal skills test, requiring no legal knowledge.  Instead, test takers are given materials and any legal maxims they will need and are tasked with a writing exercise, often a bench memo or memo to a legal partner about the materials.  This style of test is aimed at practice readiness.  An absence of state law testing may make some members of the bar nervous, especially given the focus on state knowledge in many rules (see for example the BBA’s Ethics Committee’s recent comments on proposed changes to the Massachusetts Rules of Professional Conduct Rule 5.5).  At the same time, the memo-style test might be a good way to prepare young lawyers for practice.

Seventeen states currently use the UBE, including New York, a bar considered the gold-standard by many states and foreign practitioners.  One concern is that each state using the UBE sets its own passing score.  This means that a student could fail in one state, but pass in another, resulting in potential “forum shopping” for bar admission.  States also still independently examine all other aspects of the admission process, such as the character and fitness and education requirements.

In sum, we applaud the reasoned approach taken by the BBE.  We are confident that their thorough examination of the bar exam and programs surrounding it will help Massachusetts come to the best outcome – one that will balance legal knowledge, practice readiness, and character and fitness in order to maintain the high quality of practice and commitment to justice we have today.