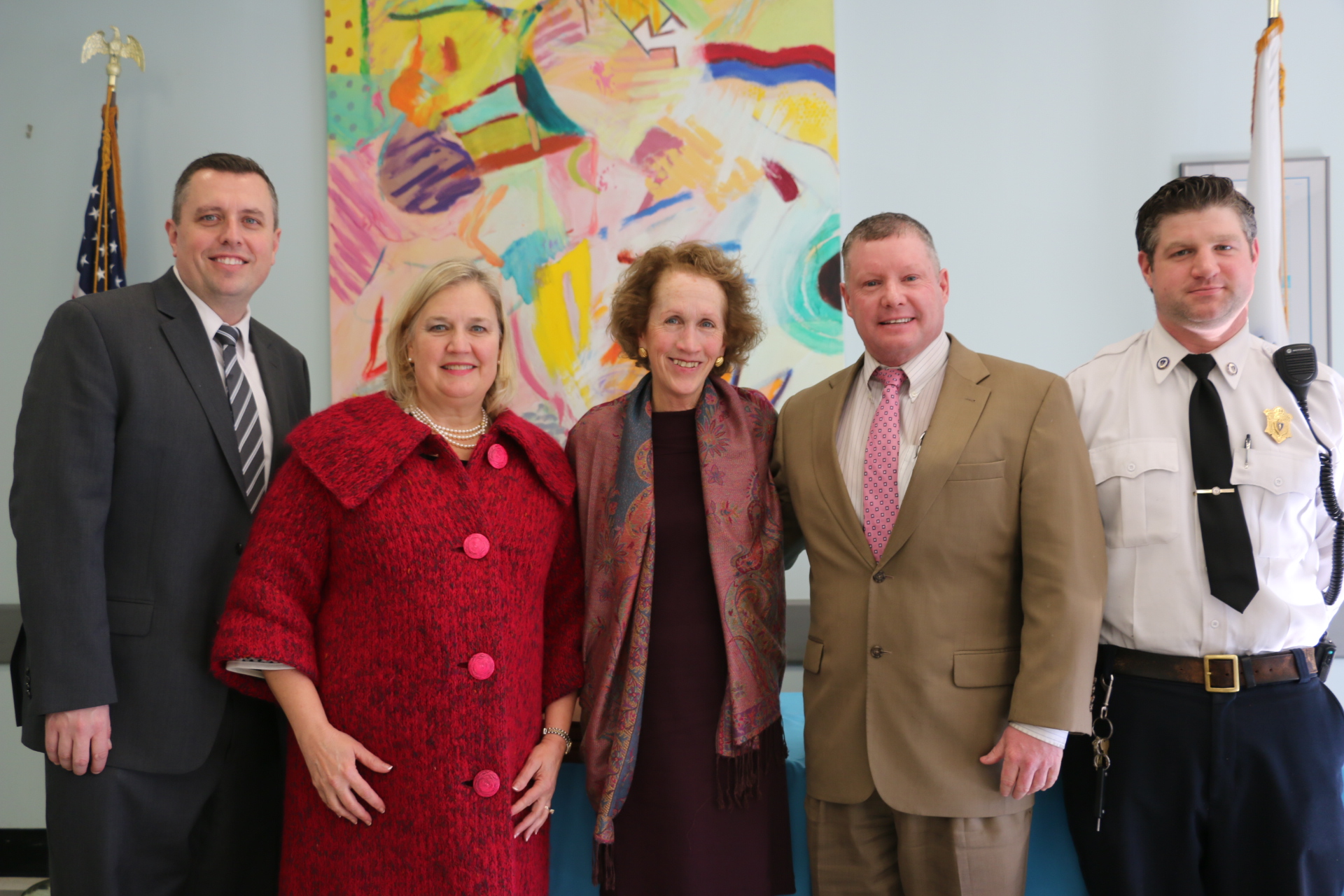 On February 18, BBA President Lisa Arrowood attended a session of Homeless Court, her third specialty court visit in the past few weeks.  Last month, President Arrowood attended a Drug Court graduation with Judge Serge Georges and a Veterans’ Treatment Court graduation with Judge Eleanor Sinnott.  Both offered moving examples of what individuals can accomplish when the courts work hand-in-hand with treatment providers to offer support and oversight.  Specialty courts are problem-solving court sessions which provide court-supervised probation and mandated treatment for mental health or substance abuse issues underlying criminal behavior.  Their goal is to reduce recidivism and increase the effectiveness of the court system by addressing root causes for criminal behaviors.

The Inn is a nonprofit organization providing emergency shelter, permanent supportive housing, job training and placement, and street outreach to more than 1,600 homeless men and women.  The special court session occurs monthly on the third Thursday at 11:00 am and is designed to resolve misdemeanor offenses, non-violent felonies, and outstanding warrants for homeless individuals, with support and dignity.  A number of participants in the session we attended were enrolled in programs at the Inn.

By removing default warrants and dismissing criminal cases, Homeless Court breaks down many of the barriers that prevent homeless individuals from securing permanent housing, employment, education, drivers’ licenses, and other government benefits, helping them to move on with their lives.  It is presided over by Judge Kathleen Coffey —  Chief Justice of the West Roxbury District Court, and Director of Specialty Courts for the BMC – who sits at a simple table under an abstract painting in a nondescript room at the Pine Street Inn, alongside a chief probation officer and a clerk-magistrate.  Participation is open to any homeless individual who meets the following criteria:

The Court operates as a progressive plea bargaining system characterized by alternative sentencing.  While in traditional criminal justice procedures, the court requires the defendant to promise to change his or her behaviors while on probation, in the Homeless Court context, the individual must have already completed a substance abuse program or be actively participating in mental health treatment and job training.  Through Homeless Court, individuals are given the opportunity to work with social workers and case managers in cooperation and collaboration with the prosecutors and defenders’ offices to overcome challenges with the oversight of a judge.  As of last summer, 101 individuals had successfully completed the Court requirements. 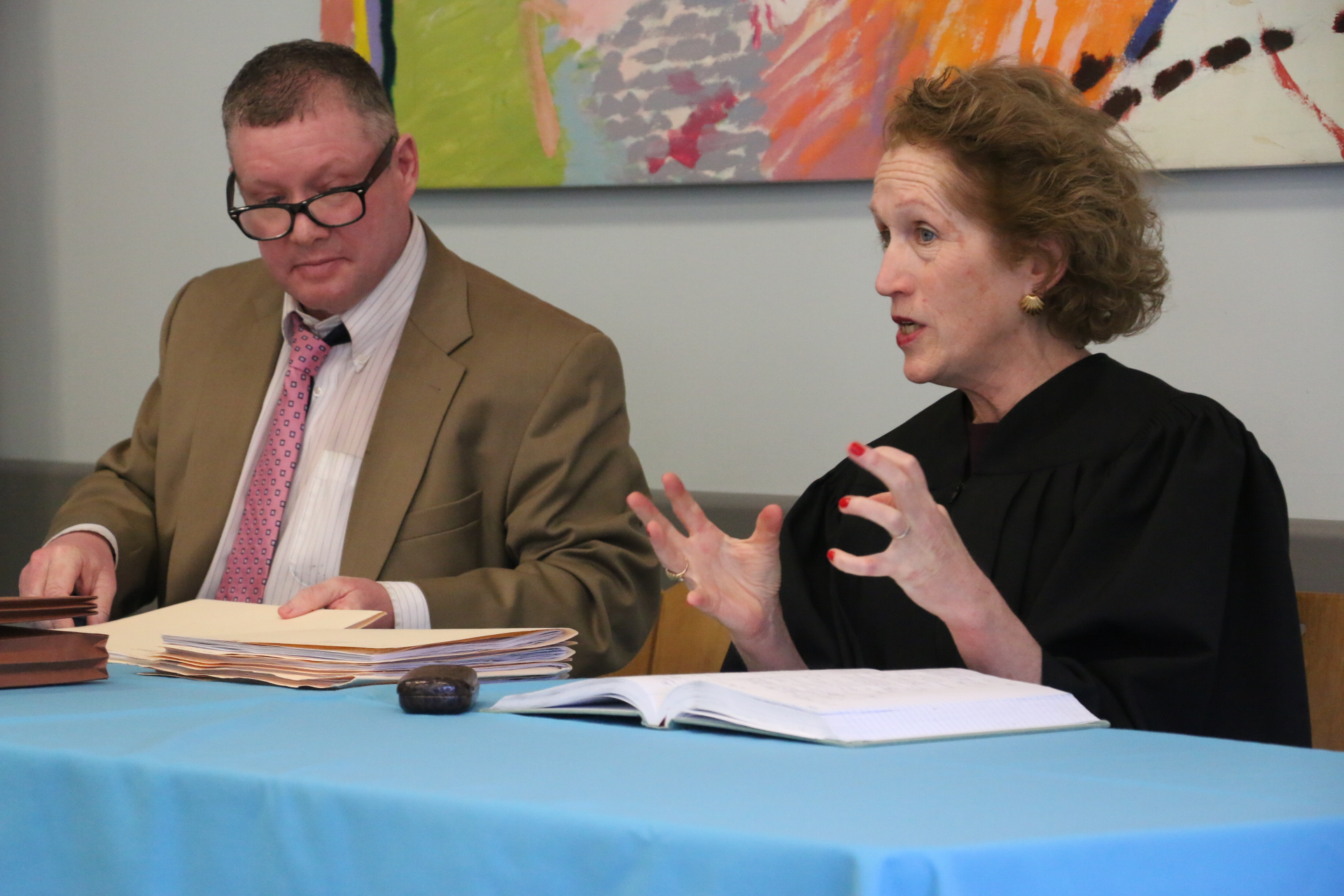 In Judge Coffey’s words, Homeless Court, “is based upon the premise that there is room for treatment, compassion and for recovery within the court system.  It recognizes that homelessness presents a complicated challenge to the courts demanding alternative approaches in the administration of justice. The court seeks to make the justice system more accessible, accountable and responsive to the needs and challenges faced by this most vulnerable population.”

Throughout the session, at which seven cases were considered, Judge Coffey often expressed sympathy for the complicated problems faced by the defendants.  Five defendants were present at the session, and two saw their cases dismissed.  Judge Coffey asked everyone to share their stories – how they became homeless, their reasons for taking part in homeless court, and what aspect of life on the streets was most challenging.  Defendants described the difficult, and varied, life circumstances that led to their hitting rock-bottom and their motivations for self-improvement, which included the knowledge that they could do better, the need to escape the isolation and constant turmoil of homelessness, and, in several instances, a strong desire to make their young children proud.  Judge Coffey encouraged positive progress, telling one defendant they were “racing in the right direction,” and District Attorney Christina Miller did the same, telling another defendant that she was “amazed and encouraged” by their progress.

Boston Bar Association President Lisa Arrowood said she was inspired not only by the profound impact this program and the other specialty courts are having on the lives of its graduates, but also on their potential to meaningfully tackle complex issues that lead individuals to commit crimes.

“It is the first time for many of these people that they are in court and something good is happening to them.  I looked around and thought that this is what they need – treatment, not incarceration,” Arrowood said.  “I believe specialty courts are highly valuable and I am grateful for having had the opportunity to see them operate firsthand.”