News from the State House: Educating Beacon Hill at a Public Hearing and a Legislative Briefing

With legislative committee hearings picking up steam of late, the 2017-18 legislative session is underway in earnest now, and we were at the State House for two important events this week.

The session technically lasts for two years, but the critical work generally must be accomplished by July 31 of the second year, as that’s the last date for formal meetings of the two houses in full.  After that, until the new Legislature is sworn in the following January, only informal sessions are conducted, with just a few representatives attending—any one of whom can individually block a bill from passing.  Thus, only those matters considered non-controversial are taken up.

The first couple of months of the session are spent on bill-filing (legislators must file bills by mid-January for them to be automatically admitted); populating the several dozen House, Senate, and joint committees; assigning those thousands of bills to the respective committees; and scheduling of hearings by the newly-appointed committee co-chairs (one from each house on the joint committees).

All bills that are duly admitted must get a public hearing before the committee to which they’ve been assigned.  Most often, because of the large number of bills on each committee’s docket, the hearings cover many bills at once.  Any member of the public can come forward to offer testimony on one or more bills, and although witnesses are asked to keep their statements brief, the hearing continues until all have been heard.

This past Monday, the Revenue Committee met for its first public hearing of the new session, and one of the BBA’s bills was on the agenda: House Bill 2645 (H. 2645): An act to continue tax basis rules for property acquired from decedents, filed on our behalf by Representative Alice H. Peisch.  It’s a complicated issue, to be sure, but fortunately, we had George Cushing, of McLane Middleton, on hand to help break it down for committee members—and within the three-minute time limit even (not counting follow-up questions from the panel)!

Without getting bogged down in the details, there were changes made to the federal estate tax several years ago, and while Massachusetts made some changes to its estate tax in response, the net result is that beneficiaries of decedents who passed away in 2010 will not get the benefit, which others do, of a “step-up” in the basis of the property they inherit (say, a home, a small business, or equities).  That means that when they sell that property down the road, perhaps many years later, they will be taxed on the capital gain not since the inheritance but rather since the decedent made the original purchase.  And if that purchase was well before their death in 2010, the difference could be not only unfair but substantial as well.

This unusual situation has led to confusion and differing interpretations among practitioners, thus creating unnecessary uncertainty.  We are seeking to provide that clarity by eliminating the anomaly that this hidden double tax represents, restoring the status quo ante, in which successors to decedents’ property get enhanced basis, but the property is subject to the Massachusetts estate tax.  Individuals who inherited property from those 2010 Massachusetts decedents will be authorized to use the federal adjusted basis (generally the value at death), as determined under the federal rule that applied in 2010 only, if the carry-over basis regime was not elected for federal tax purposes. 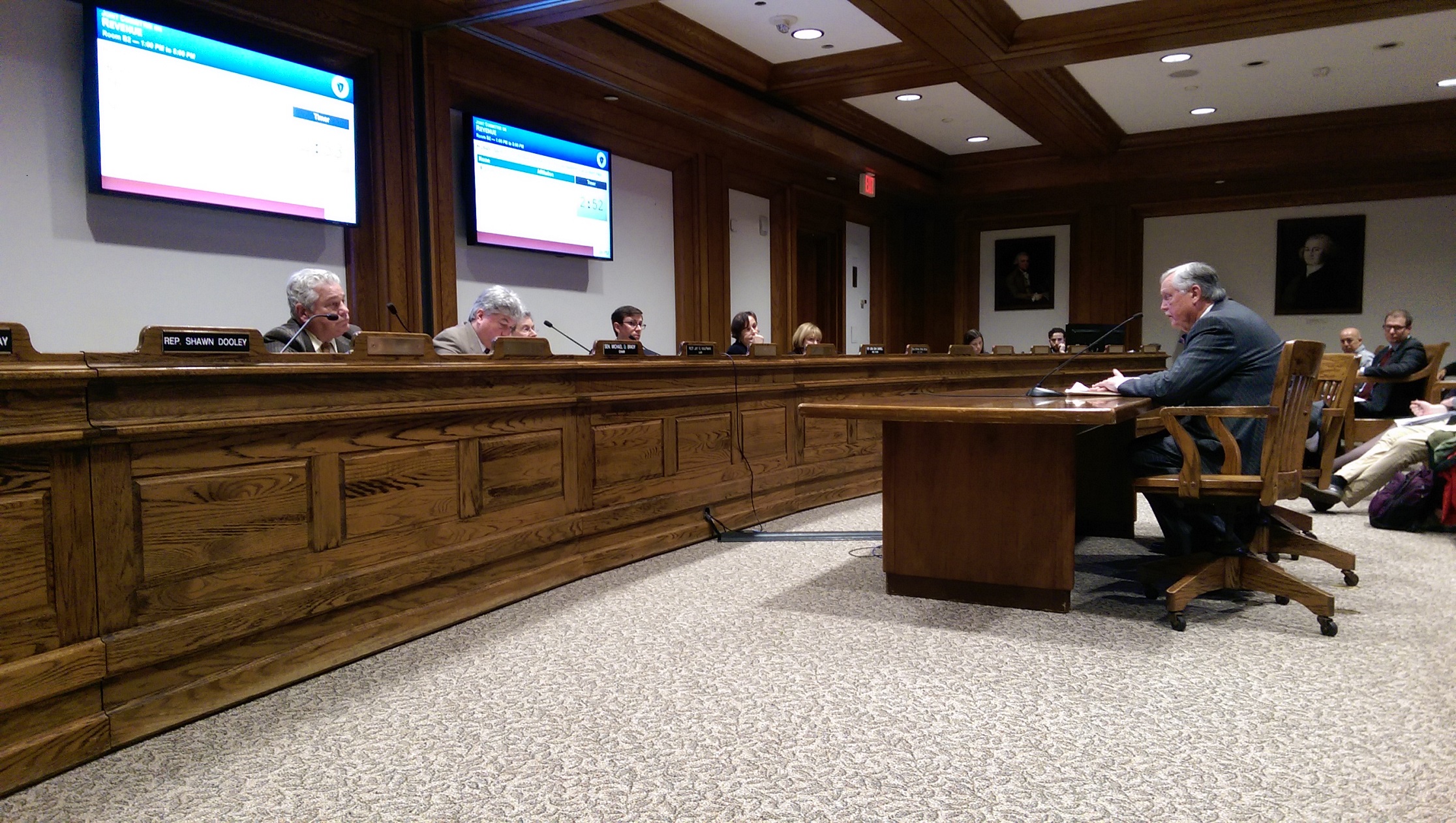 George Cushing, testifying on behalf of the BBA, before the Legislature’s Joint Committee on Revenue, April 3, 2017

The good thing about this first Revenue Committee hearing is that, by design, all the bills heard were approved by the Committee in the last session.  We hope that our bill will be among those reported favorably again—and that we can push it on for floor votes in each chamber this time.

Those votes would likely happen farther into the session.  For now, the biggest item before both houses is the development of the Fiscal Year 2018 (FY18) budget.  As we’ve noted, the Governor has already filed his proposal for spending the $40+ billion the state expects to take in next year.  Before FY18 begins on July 1, the two chambers will (we hope) come together on a budget package to send back to the Governor—which he may then accept as is, or (more likely) will mostly approve but send back with targeted cuts and some suggested changes.

The next big step in that process takes place this coming week, with the House Ways & Means Committee formally submitting its version of the budget for deliberation by the full House over the rest of the month.

One of the BBA’s biggest priorities, in this or any other year, is funding for civil legal aid in the Commonwealth, which is primarily provided by the Massachusetts Legal Assistance Corporation (MLAC).  MLAC, in turn, receives the bulk of its resources through an appropriation in the state budget.

Our commitment to this issue is reflected by the establishment of a BBA Statewide Task Force to Expand Civil Legal Aid in Massachusetts, and our adoption of the Task Force report’s primary recommendation, that MLAC funding be increased by $30 million over three years.  Since the report’s release in 2014, state finances have hit a prolonged rough patch in which revenue has consistently missed targeted levels, and despite broad and deep support from Massachusetts legislators, we’ve fallen short of that goal.  Still, the Legislature and the Governor have come through with a 20% increase for MLAC across the last two years, to $18 million in FY17, even as overall spending has grown at a much lower rate.

This year, we are advocating for a $5 million increase in MLAC’s line-item.  Our efforts on civil legal aid are in conjunction with the Equal Justice Coalition (EJC)—a joint partnership of the BBA, MLAC, and the Massachusetts Bar Association—and to help spread the message about civil legal aid on Beacon Hill, and grow our support even further, the EJC held a briefing earlier today (Thursday) for elected representatives and their staffs.

The BBA’s President-Elect Mark Smith, of Laredo & Smith, took part in a panel discussion, to help educate the dozens of State House denizens in attendance.  In particular, Mark underscored both the report’s finding that investment in civil legal aid produces a positive return on investment for state coffers, and the BBA’s continued commitment to fighting for that full $30 million increase in state funding for civil legal aid—even if on-going budget constraints mean that it will take longer to get there than we, or the Legislature, would like.  (You can get more info about that funding here.) 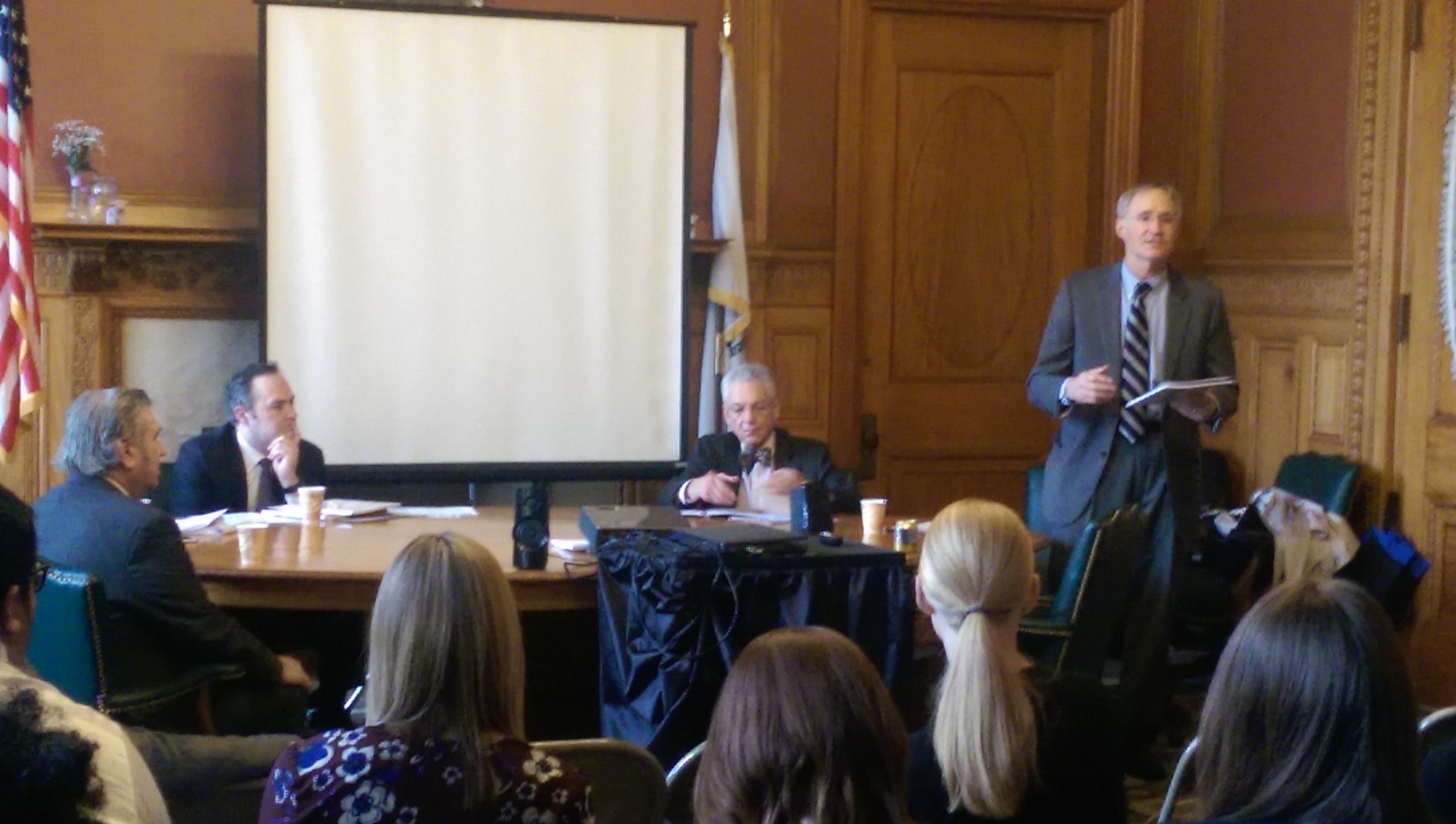 And with the White House recommending that Congress zero out funding for the Legal Services Corporation (LSC), which distributes an additional $5.2 million to providers in Massachusetts, our support from the Legislature at home may be tested even further.  Although the LSC money is independent of the state-level appropriation to MLAC, we would nevertheless certainly feel that loss here, as it represents more than 20% of the total funding for legal services in the Commonwealth.

So as we stay on top of the budget process at the State House—and keep you updated on it—we’ll also have one eye cast on the Capitol in DC.  We’ll be headed that way to make the case for the LSC, and civil legal aid in general, as part of the American Bar Association’s annual ABA Day lobbying event toward the end of April.

More on that to follow in this space … In the meantime, check out our four different podcasts relevant to the larger issue: