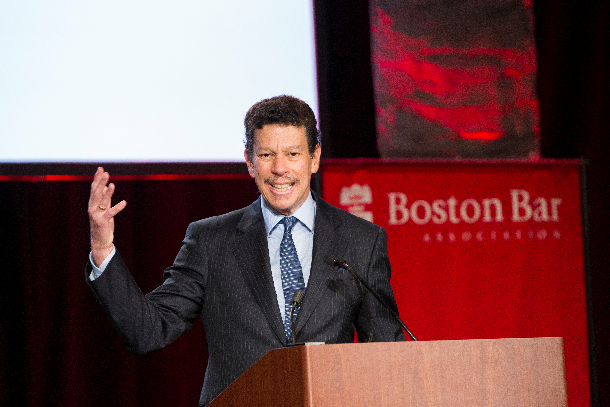 We were thrilled to welcome Professor David Wilkins, Vice Dean for Global Initiatives on the Legal Profession and Director of the Center on the Legal Profession at Harvard Law School, to provide the keynote speech at Thursday’s Annual Meeting, one of the largest bench-bar events in Massachusetts.  Wilkins is well known for his research on the impact of globalization of the legal market, diversity in the profession and the various career paths of attorneys.  His speech was engaging, and at times funny, depressing, and hopeful.  He demonstrated a remarkable understanding of the trajectory of the legal profession and laid out a number of issues (often in threes) requiring the attention of attorneys, law firms, legal educators, and the public at large.

Wilkins began with a look back at recent developments in the law.  Since 2008, the outlook has been less than optimistic, with scholars talking about “the death of Big Law” and “the end of lawyers.”  However, Wilkins encouraged attendees to expand their scope and think not just about attorneys in private practice but also the entire legal system, including underfunded and understaffed courts, state and federal agencies facing budget cuts, and legal services that are far from being able to meet the needs of their constituencies.  These shortcomings in legal jobs are accompanied by myriad systemic challenges, including mass incarceration, struggles with individual freedoms and rights, and questions about the political process.  In addition, law schools are facing lower enrollment and lower job placement rates.

So the question, Wilkins explained is, are these problems part of a paradigm shift or simply a temporary correction that will soon re-adjust?  And the answer he exclaimed with comic timing is, “Who knows?!”  It’s too early to tell for sure, but it seems likely that a lot of these changes are here to stay and may have been coming more gradually anyway, but were simply pushed into high gear by the recent financial crisis.

These changes are not unique to the legal profession, either.  In fact, they have proliferated in nearly all professions and daily life.  Wilkins described three major developments:

The law is a lagging, not a leading indicator of change, which is unsurprising given its focus on history and precedent.  Unfortunately, that can also make it slow to recognize change, and even slower to react to it.

Wilkins ended with a plea for lawyers to work together.  The only way we can preserve the core principles of the legal profession and excellence in practice, while at the same time advancing to become more diverse and provide more service to broader constituencies is by coming together to effectuate systemic change.  We at the BBA hope to be at the forefront of this movement and hope lawyers will continue coming together at 16 Beacon to discuss and work on these essential issues and we thank Professor Wilkins for leading this discussion.