Judiciary, Access to Justice, and Mass Incarceration All on the Menu at Annual Meeting

Late last week we held our Annual Meeting Luncheon and many of the themes we discuss here featured prominently.  From civil legal aid to mass incarceration to the judicial nomination process, we heard first-hand from some of the state’s top leadership about their work with the BBA and the important role the BBA plays for them.

First up was Speaker Robert DeLeo who received our Presidential Citation. 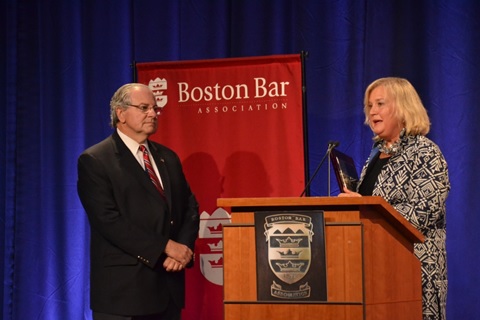 The Speaker has been a staunch supporter of both the judiciary and civil legal aid over his 25-year tenure in the State House.  The Speaker helped shape our Investing in Justice report, urging former BBA President J.D. Smeallie, Chair of the BBA Task Force to Expand Civil Legal Aid in Massachusetts, to include stories from civil legal aid recipients in the Task Force’s report, in addition to statistical analysis of those turned away and reports on potential cost savings to the state from increased investment.  We have always been impressed with his ability to see the human side of issues.

Speaker DeLeo began his speech by noting his pride in the state’s rich legal history, saying we had repeatedly “set the foundation for justice in America”.  He recognized the work of former Supreme Judicial Court Chief Justice Roderick Ireland and thanked Chief Justice of the Trial Court, Paula Carey, and current Chief Justice of the SJC, Ralph Gants, for their work on court reform and their advocacy in the Legislature.  Having led the push for court reform and the judicial pay raise in recent years, the Speaker boasted that our judiciary remains one of the best in the country, and he assured the crowd that the House remains committed to making justice a priority and to adequately funding the courts. 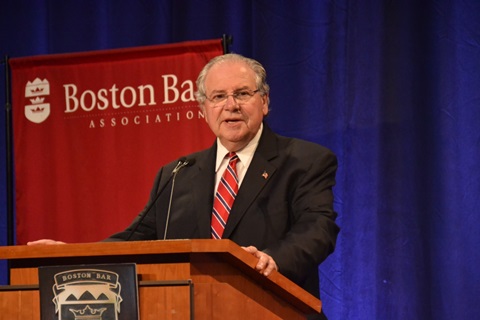 Next, he moved onto the BBA’s work on civil legal aid.  After praising the BBA for leadership in the legal community and partnership on Beacon Hill, he singled out J.D. Smeallie and acknowledged that the $2 million increase for legal aid in the FY2016 budget was “not what we hoped it could have been,” but represents only a starting point.  He pledged that continued investment – and ensuring that the most vulnerable, such as domestic-violence survivors and the homeless, receive legal assistance — remains a priority for the House.  Even though Massachusetts is at the forefront of providing legal aid by almost any metric, the Speaker reiterated his commitment to maintaining the high standards we have set as a national leader on both administering and providing access to justice, saying that, as our Task Force demonstrated, it is not only the right thing to do but also fiscally prudent. 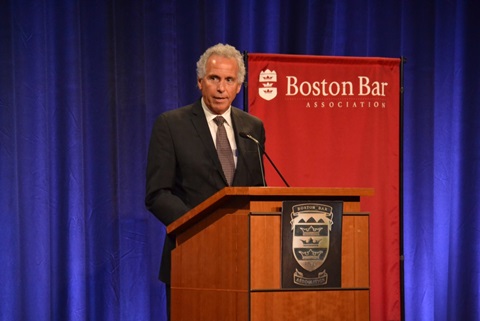 We then presented Chairman John Fernandes with our Distinguished Legislator award, honoring him for his work as a member of that civil legal aid task force, as House Chair of the Joint Committee on the Judiciary, and as a leader on alimony reform and on post-conviction access to forensic testing.  He humbly noted that when we honor him with a personal award, we are intrinsically honoring as well the countless others who are always necessarily involved in the process of getting legislation enacted.  On the alimony statute, for example, he cited the work of Chief Justice Carey and members of the bar.

Chairman Fernandes thanked the BBA for calling attention to the growing access to justice gap and for working to get the attention of legislators, especially non-lawyers who may not have witnessed first-hand the struggles of either pro se litigants or the courts in handling them.  The BBA, he said, is unlike self-interested single-issue advocates, because we involve ourselves with issues such as these.  He praised the BBA for being relentless on civil legal aid, and for helping him make the case to the non-lawyers among his colleagues.  And he promised that “we will not rest until there is access to justice for all who need it.” 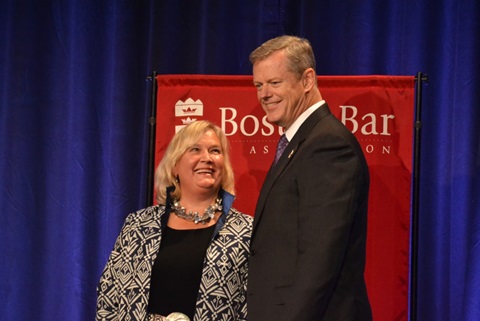 Finally, our keynote speaker, Governor Charlie Baker, addressed the more than 1,300 attorneys in attendance.  Though he is not a lawyer, the Governor spoke fondly of the many lawyers he has worked with and learned from over the years, including his current Chief Legal Counsel, Lon Povich – another member of the BBA Statewide Task Force to Expand Civil Legal Aid in Massachusetts.  He then discussed his theory of governing, an overarching theme of his speech.  He explained that being a Republican Governor in a Democratic state is rife with challenges, but also that he embraces working with others, even those with vastly different opinions.  He cited the letters of BBA founder John Adams and his wife Abigail, adults who found ways to disagree without being disagreeable, as a model for the way government should function — the ideal outcome being a “combo platter” that draws from everyone’s ideas.  In his own words, governing is finding solutions.

He offered as an example the opioid epidemic, an issue on which the Governor teamed up with Attorney General Maura Healey (also in attendance that day), and the Secretary of the Executive Office of Health and Human Services, Marylou Sudders, to issue his task force report earlier this year.  He is looking forward to continuing his work with the Legislature, health care community, legal community, and justice system to address the many facets of this complex and overwhelmingly large issue.

That same philosophy of governance also carries into civil legal aid.  The Governor acknowledged the inadequacy of relying, to a great extent, on IOLTA to fund civil legal aid.  That program, explained in more detail in our Investing in Justice report, collects the interest on all funds lawyers hold on behalf of clients, such as while conducting deals, that sits in a bank account for a brief period of time, and directs it to legal aid.  This has been an invaluable funding source for civil legal aid over the years, but has plummeted from nearly $32 million in 2007 to only around $5 million annually today due to a decrease in the number of deals and a collapse in interest rates following the 2008 recession.  This experience has revealed a fundamental flaw – when times are toughest, and therefore the need is greatest, funding for civil legal aid from this extremely important source is generally at its lowest.  The Governor described his hope to begin an open-minded dialogue on finding a way to improve legal aid funding and stabilize its sources. 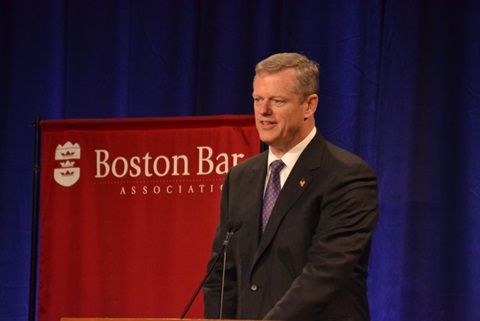 The Governor thanked former BBA President Paul Dacier for serving as Chair of the Judicial Nominating Commission.  As we have stated here in the past, the key to continuing our proud history of great and diverse judges is to begin with great and diverse applicants, and both the Governor and the JNC are committed to this outcome.  “I may not be a lawyer,” he stated, “but I want to be remembered for appointing great judges … with your help.”

He then discussed justice reinvestment, the theory that we can use the savings from reducing incarceration rates toward keeping people from entering, or returning to, the justice system through alternative programming.  He noted that, although Massachusetts ranks well nationally, incarcerating people at roughly ½ the national rate – which he described as a tribute to many in the room — we can still learn from other states.  For this reason, he teamed with Chief Justice Gants and legislative leaders to request a review of Massachusetts policies by the Council of State Governments.  They hope to learn what works well in the Commonwealth and what they should change to help reduce recidivism and assist people in re-entering society.  The Governor said he looks forward to examining all the potential solutions and took the opportunity to highlight his willingness to consider a measure to end the practice of suspending driver licenses for drug offenders whose crimes weren’t motor-vehicle related – one that he hopes and expects to be able to sign into law.

Finally, the Governor closed by seizing the opportunity of our Annual Meeting – and capitalizing on its theme of civil legal aid – by continuing the tradition of declaring October to be Pro Bono Month in Massachusetts.

In all, it was an impressive afternoon and we look forward to seeing the solutions these fine leaders devise to the issues they identified.