A couple of weeks ago we previewed our Chapter 180 Working Group Forum.  The Forum was held at the BBA on November 12 and we couldn’t be happier with the outcome.  Around forty attendees representing a broad array of stakeholders took part.  There were representatives from law firms of all sizes, academia, organized labor, health care, state legislators’ offices, a large number of non-profit and charitable organizations and related trade groups as well as government agencies including the Attorney General’s and Secretary of State’s Offices.

By way of review, nonprofits are a major part of the Massachusetts economy.  According to a 2012 Bureau of Labor Statistics report, they employ 17.7% of the state’s total private work force, one of the highest such percentages in the country.  Chapter 180 is the principal corporate statute that applies to nonprofits in Massachusetts.  It has existed generally in its current form since the early 1970s, and the last round of minor revisions were completed in early 1991.  In the late 1990’s a BBA task force studied Chapter 180, and in 2000 proposed a series of significant amendments to modernize and streamline the law.  Although at that time there was significant consensus on most individual items, there were a few major items that divided practitioners and resulted in putting the entire proposal aside.  Fifteen years later, it is overdue for a fresh consensus look.

Many Massachusetts nonprofit leaders, as well as lawyers who practice in this field, are frustrated with this construct.  Not only are the laws regarding nonprofits cumbersome and difficult to find, cross-reference, and interpret, but they are also seriously outdated.  For example, Chapter 180 does not address modern technology, such as email communication, or the current understanding of fiduciary obligations.  Other provisions permit overbroad access to members’ personal contact information and make mergers and amendments to articles of organization exceedingly difficult in certain circumstances.  For practitioners who deal with nonprofits only occasionally, the existing laws can easily be subject to misunderstanding or misinterpretation.  For non-lawyer directors, officers, and organization members, the primary audience for the statute, it is an exemplar of obscurity and inscrutable legalese. 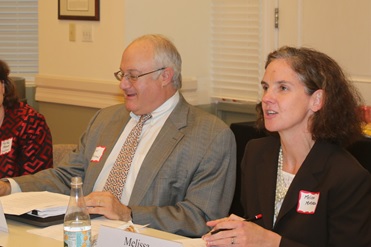 At the forum, the Working Group Co-Chairs Melissa Sampson McMorrow, of Nutter, McClennen & Fish, and Michael Malamut, an attorney-at-law with a practice in nonprofit governance, discussed this history as well as the Working Group’s subgroups, which are studying various materials with an eye towards updating the statute.  The subgroup issues include:

They then opened the floor for discussion.  They discussed a range of policy issues such as:

And these are only the beginning.  Since the forum, we have already received follow-up contacts, both from those who attended and would like to remain engaged with our effort and from others who were unable to attend but would like more information.

There is no question the Working Group will have a busy year trying to address all stakeholder concerns and improve the law.  The Working Group wlecomed the opportunity for people outside the Working Group to share their views and help shape its pracitce.  We look forward to gathering more feedback from Forum attendees and others as we continue to move forward with this process and will keep you updated on all of the latest developments.