Focused on the Budget – BBA Update

In addition to yesterday’s budget member alert, we have been busy with advocacy of our own.  At the same time we asked you to contact your Representatives, we sent a letter to Speaker of the House Robert DeLeo, explaining the need for adequate funding for the three issues described above.  We have also been meeting with state and national leaders to discuss our budget priorities.

Earlier this week, former BBA President and Chair of the BBA Statewide Task Force to Expand Civil Legal Aid in Massachusetts, J.D. Smeallie, met with Speaker Pro Tempore Patricia Haddad’s office and Assistant Majority Leader Byron Rushing.  More meetings are scheduled in the coming weeks.  Smeallie has spent the last 18 months educating legislators on the findings of the Task Force’s Investing in Justice Report and is devoted to raising awareness of the need for increased legal aid funding.  Through surveys of civil legal aid agencies, the Task Force found that 64% of those eligible for legal aid, at 125% of the federal poverty level, are turned away annually due to lack of resources.  This lack of resources is due in-part to the nearly $30 million decrease in IOLTA funding over the last decade due to fewer deals and plummeting interest rates (more on this below).

This drop in funding caused legal aid organizations to lay-off attorneys and support staff, resulting in an increased number of pro se litigants navigating the courts.  Unrepresented litigants cause delays, take up the time and efforts of judges and court staff, and often struggle to access justice, as demonstrated in a survey of judges conducted by the Task Force.  Finally, the Report demonstrates that investment in civil legal aid yields positive returns, helping the state to save on back end costs such as shelter, police, and medical expenses, as well as bring money into the state through federal benefits.  The Report demonstrate that every $1 invested in civil legal aid serving evictions, domestic violence, and federal benefits, yields $2-$5 dollars in returns to the state.

At the same time, BBA President-Elect Carol Starkey, Vice President Mark Smith, and Director of Government Relations and Public Affairs, Mike Avitzur, have spent the last two days in Washington, DC, at ABA Day with their counterparts from the MBA. 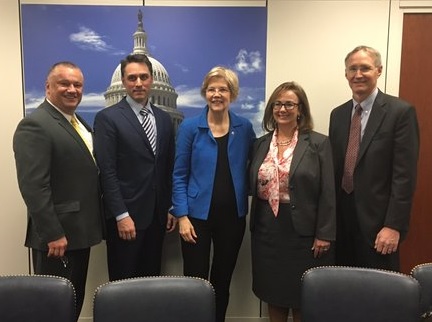 In addition to discussing mass incarceration issues and opposition to accrual accounting for law firms, our delegation is advocating for increased funding for the Legal Services Corporation (LSC), the federally funded non-profit corporation the promotes equal access to justice and provide grants for high-quality civil legal assistance for low-income Americans.  LSC provided four legal aid programs in Massachusetts with just over $5 million in FY2016.  In recent years, similar funding has yielded roughly 11,000 to 13,000 cases closed annually.  Stay tuned for a longer write-up on our ABA Day meetings on this blog next week.

On Tuesday, we heard from MAIOLTA Director Jayne Tyrrell who spoke to the BBA Council about ways lawyers and law firms can maximize their IOLTA contributions, which in turn benefit civil legal aid organizations.  As noted above, IOLTA is one of the largest funders of civil legal aid, but due to historically low interest rates, its funding amounts have decreased dramatically.  While federal interest rates remain low, banks vary in their individual offerings, thus it matters where lawyers and law firms do their banking.  In Massachusetts, more than 40 banks have signed-on as Leadership Banks, agreeing to pay a minimum of 1% interest on IOLTA accounts.  Here is the full list.  Tyrrell encouraged all lawyers and law firms to consider banking with one of the listed banks for the benefits their interest rates will provide for civil legal aid.

At the same meeting, we heard from Governor’s Chief Legal Counsel, Lon Povich.  He spoke on the budget as well, noting that both the Governor’s proposed budget and the budget issued by the House Ways & Means Committee contain no new taxes or fees.  The Governor’s FY17 budget proposal contained a 1% increase for civil legal aid and the courts, in addition to $1 million and enacting language for statewide expansion of the Housing Court.  While the House Ways & Means budget proposal included slightly larger increases for the Trial Court and MLAC, it did not include language or funding for Housing Court expansion.

Povich also discussed the work of the Massachusetts Criminal Justice Review undertaken by the Council of State Governments, and under the sponsorship of the Governor, Chief Justice of the SJC, Senate President and Speaker of the House, as well as the process  to fill vacancies on the SJC and other courts.  Both are still ongoing and we look forward to their forthcoming results.

The budget process continues through June, and we will continue to advocate for adequate funding for our priority issues and hope that you will as well – starting with contacting your Representative as explained above.  We will keep you updated on how the budget progresses and will likely be reaching out at other key points to request your help again.  Thank you in advance!