For those who have ever visited a correctional facility, you know that there are a host of security measures required upon entry. The Code of Massachusetts Regulations regarding attorney access at Massachusetts Correctional Institutions (103 CMR 486) is designed to facilitate inmate access to proper legal counsel while accommodating security concerns at prisons. Its purpose is to lay out standards to achieve that balance for attorneys, law students, and paralegals, as well as investigators and interpreters.

The Executive Office of Public Safety (EOPSS) in cooperation with the Department of Corrections (DOC) recently revised CMR 486 in response to concerns raised by several parties—including the BBA, the MBA, the ACLU of Massachusetts, Prisoners’ Legal Services, and the Committee for Public Counsel Services—with regard to the inconsistent application of these rules and overly intrusive searches of attorneys. Female attorneys, specifically, have found themselves subjected to seemingly arbitrary and unnecessarily invasive searches at prisons, often after an underwire bra triggers a metal detector in the course of an initial scan.

In response to an invitation for comments from EOPSS, the BBA and its Criminal Law Section reviewed the revisions to 103 CMR 486 and found the efforts to be worthwhile. The BBA believes that the revised rule will function to standardize applications of the CMR—alleviating concerns about intrusive searches of attorneys and facilitating attorney visits to clients at correctional institutions. We hope the final rules will be uniformly enforced by all DOC facilities and that support training for all involved personnel will ensure proper implementation. One thing we noted, however, is that 103 CMR 486 applies only to attorney visits at state prisons. We encouraged EOPSS to consider extending the revised rule to county correctional facilities as well, in order to ensure uniform proper treatment of attorneys at all correctional institutions in Massachusetts.

The Criminal Law Section was also largely supportive of the revised rule, calling it “generally fair, reasonable, easy to follow and an improvement over the existing CMR.” While the Section was pleased to see increased record keeping requirements—such as incident reports stating an articulable reason for a pat down search of an attorney whenever one is requested by an officer,—some members voiced concerns that this additional paperwork might be burdensome or impracticable. Moreover, while members were also pleased to see a general presumption supporting the reasonableness of an attorney’s explanation for the cause of any interference indicated by the metal detector scan, individuals hoped that these changes would not overly limit correction officers in keeping prisons safe. Other concerns included the fact that the revisions did not address rules regarding specific articles of clothing—particularly women’s clothing—that have been inconsistently implemented and enforced at certain correctional facilities.

On Tuesday, we attended the EOPSS hearing on the revised CMR, where individuals and organizations were given the opportunity to publicly voice some of their own concerns before a panel of EOPSS and DOC representatives. Like the BBA, those who testified generally supported the revisions, but took the chance to offer some further suggestions based on their personal experiences and perspectives. 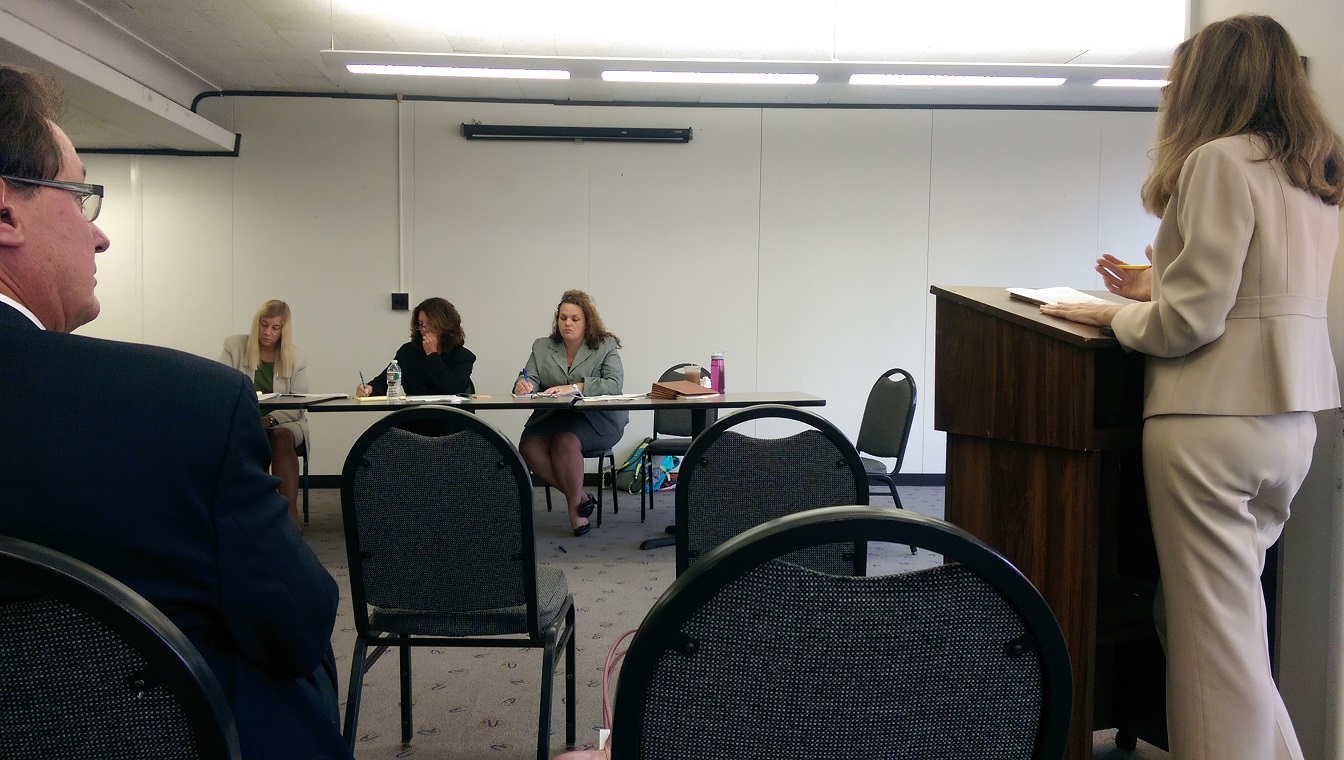 First to testify was Lauren Petit on behalf of Prisoners’ Legal Services (PLS), which viewed the changes as largely positive. Nonetheless, PLS suggested that changes should also include other professionals who are supervised by attorneys, such as paralegals and interpreters. Moreover, they believed that some of the language changes may be “unnecessary” or “overkill”, noting that they appear to be geared towards limiting access. As a result, Petit asked for further clarity in the definitions section of the CMR. She also suggested that the clearance process for law students and paralegals be centralized, so they wouldn’t have to be certified by each prison individually.

Joel Thompson of the Harvard Prison Legal Assistance Project, also welcomed the changes, but made proposals to move the revisions even further. He asked the panel to strive for consistency and clarity, speaking to the discrimination that female law students face when entering correctional facilities. The group sends 150 law students into prisons each year, but “every once in a while,” he said, “there’s an interaction that’s less than optimal,” noting that the problem seems to have worsened this year, and that female students are more likely to have difficulty gaining access. He proposed that the rule allow access to law students on the same basis as attorneys, on the grounds that they are in virtually the same position. Thompson also suggested the clarification and streamlining of the process for law students to get clearance to enter prisons.

The president of the Massachusetts Association of Criminal Defense Lawyers, Michael Hussey, raised the same concerns about consistency and equal treatment of men and women. He also testified for the easing of access to prisons for private investigators (PIs). He described PIs as essential to criminal defense and noted that the current requirements for PI access are unnecessarily burdensome (e.g., PIs are required to give one week’s notice before entry). Richard Slowe, the Chief Investigator for the Public Defender Division of the Committee for Public Counsel Services (CPCS), pointed out that CPCS staff investigators, unlike private investigators, are not technically covered by the new regulations and argued that they should be part of a central database of pre-screened visitors. Slowe also echoed the testimony of Hussey in stating that CPCS investigators should not only be allowed more accommodations (such as access to private interview rooms), but also be governed by the same rules as attorneys (as they are always supervised and are already subjected to extensive background checks).

Perhaps the most passionate testimony came from Victoria Kelleher, who works in private practice, and has been subjected first hand to what she termed “illegal searches.” She described her experiences entering prisons to visit clients as “unpredictable, stressful, and onerous” and shared how she has been turned away for wearing items such as boots and belts. These experiences only added to her concern that women are excluded for things seemingly unrelated to security (e.g. not being allowed access for wearing suit jackets with pants that do not match). Kelleher asked for more-specific definitions regarding apparel. In addition, Keller testified for further revisions that would allow attorneys to bring in files that are not necessarily “official”, but still pertinent to a client’s case. She also suggested that the DOC needs to “keep up with the times” and allow attorneys to utilize their own laptops to better defend their clients. Kelleher also recommended more training for prison security to ensure uniformity of attorney experiences and reduce delays that result when correction officers have to try to interpret the regulations. Her testimony spoke to the concerns of many female attorneys in Massachusetts who have had negative experiences with prison security.

While the revisions to 103 CMR 486 have been received positively, we will continue to monitor any further changes that may result from the BBA’s written testimony and that of the witnesses EOPSS and DOC heard from this week.