Discussing the US Supreme Court from Inside and Out 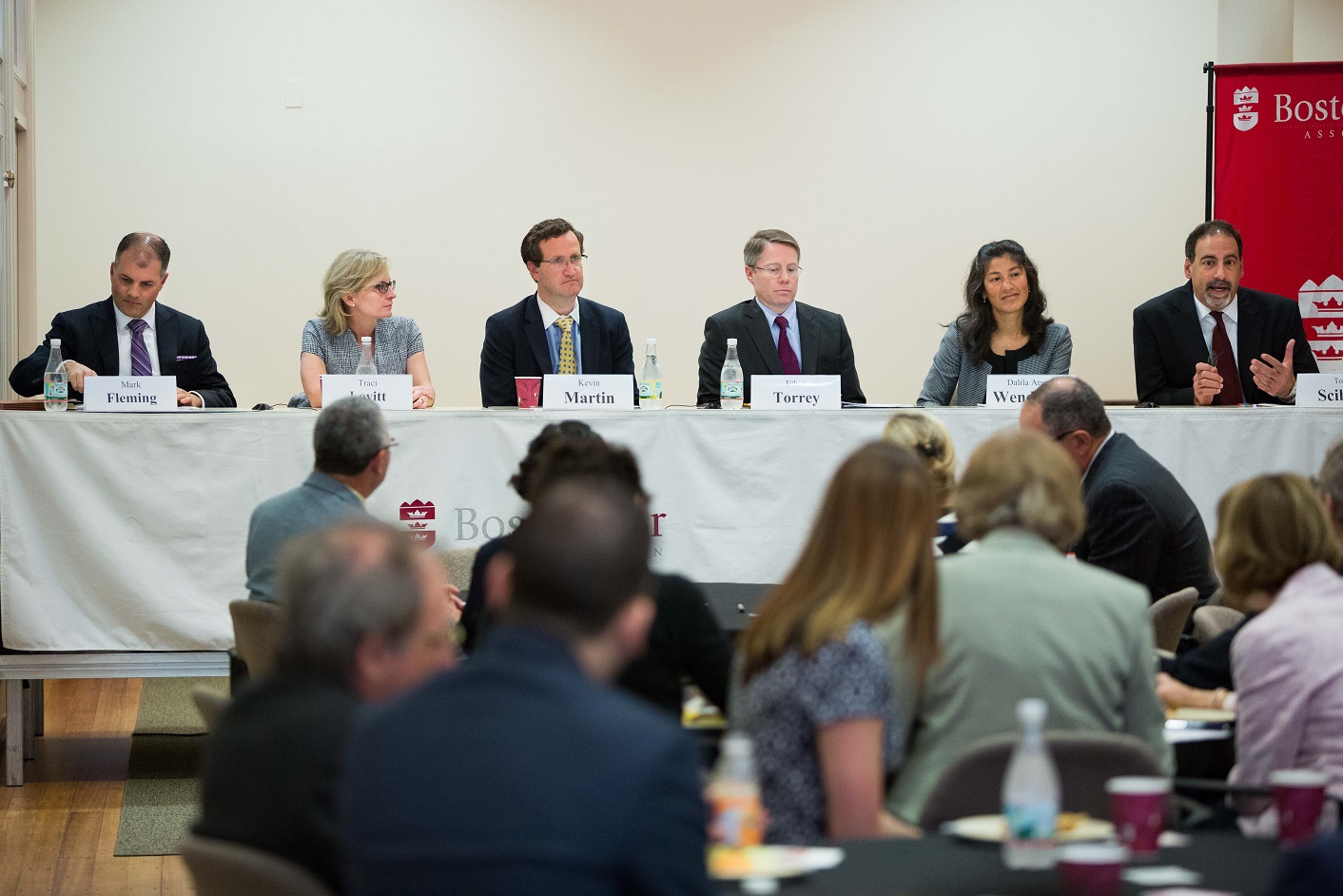 The Supreme Court is Like Mordor … One does not simply walk into it.  This and other insights – Special masters! Hotly contested rivers! Quills!  And everything you need to know to practice before SCOTUS  – emerged at Wednesday’s Conversation on the US Supreme Court program at the BBA.  Moderated by BBA Amicus Committee Chair Tony Scibelli, the event featured a lively discussion of the US Supreme Court by keynote speaker Ethan Torrey, Legal Counsel to the Court, Mark Fleming, WilmerHale, Traci Lovitt, Jones Day, Kevin Martin, Goodwin Procter, and Dalila Wendlandt, Ropes & Gray.

The Office of Legal Counsel 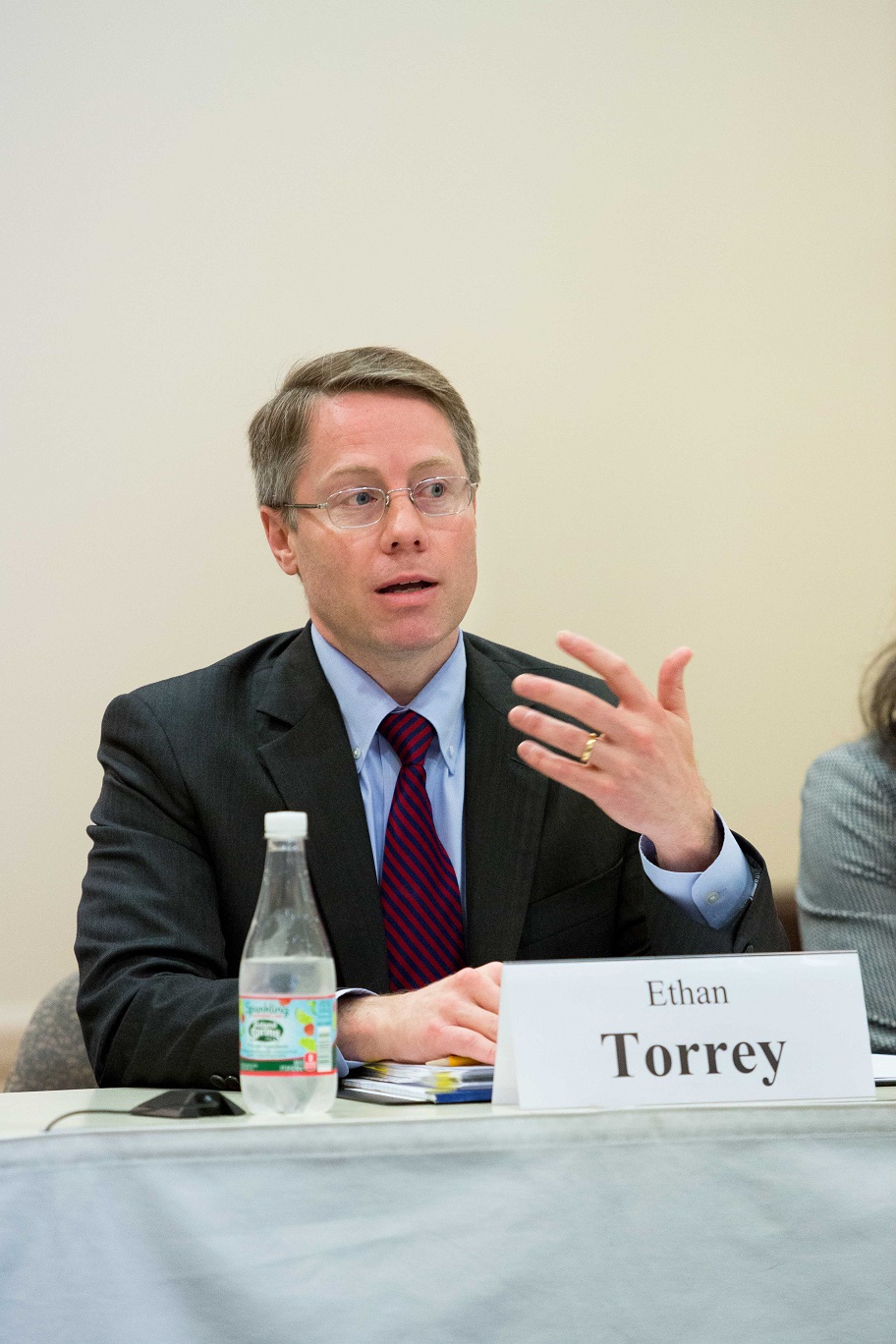 Torrey began his keynote address by giving attendees some insight into his job.  He is one of two attorneys for the Court, and they share the services of a single paralegal.  They are responsible for providing legal services to the Court as an institution and advising the Court on certain Court and case related matters.  More specifically, they advise the Justices and the Court on ethics, contracts, police and security issues, litigation (often involving protesters and First Amendment claims), and proposed amendments to the federal rules, as well as monitoring legislation of interest to the Court.

The Office of Legal Counsel also provides the Court guidance on petitions for extraordinary relief (such as writs of habeas corpus and writs of mandamus) and cases arising under the Court’s original jurisdiction, often involving disputes between states.  These disputes have a history dating back to before the Constitution and the Supreme Court’s original jurisdiction was contemplated in Alexander Hamilton’s Federalist Paper number 80.

Nowadays these cases often involve disputes about borders related to geographical and alluvial changes, interstate compacts (which are ratified by Congress and hold the force of federal laws), escheat claims (competing claims to abandoned property), tort claims (often akin to public nuisance claims, addressing such issues as river pollution), water rights, and claims challenging regulations in other states.  Procedurally, states seeking relief from the Court must first file a motion for leave to file, and the Court exercises this jurisdiction sparingly.  If the motion is accepted, the Court generally then appoints a “special master” who gathers evidence, hears testimony, and files a report with the Court.  The parties then file exceptions to the report, and the Court hears oral argument on the exceptions before making its decision, often considering not only the facts of the case, but also the equities involved before fashioning a remedy.

Kevin Martin talked about the first step in getting your case to the Supreme Court – the briefing process.  He urged attendees, as angry as you may be after an adverse ruling, to carefully consider whether they should actually file the case for certiorari (“cert”), asking whether there might be any potential strategic advantages to waiting, both from a business or practical perspective – where there’s a conflict among the circuits, might it be better to let an unfavorable ruling stand than to put favorable rulings elsewhere at risk – and also in terms of possible changes on the Court.  Once the decision is made, the most important element of any petition for cert is to convince the Court that there is a split in federal circuit courts that needs immediate resolution.  He suggested involving interested groups, potentially as amici at this early stage.

If you are rejected, don’t lose heart: roughly 10,000 certs are filed annually, and only 60-80 are actually heard by the Supreme Court, so the odds are stacked against you.  Mark Fleming pointed out that this situation is increasingly dire as the Court has recently taken fewer cases annually, and as of now has granted cert in only 12 cases for next Term.

If you are one of the lucky few to be granted cert, the merits briefing stage is similar to that in federal courts of appeals.  The Supreme Court took the case likely in recognition of the circuit split, so the Justices will be looking for you to make strong arguments based on precedent (mostly from the Supreme Court), and policy concerns.  Here again, amici can be helpful in making policy arguments and providing the Court with the information they need to understand complex issues and facts.

You Got There!  Now What… 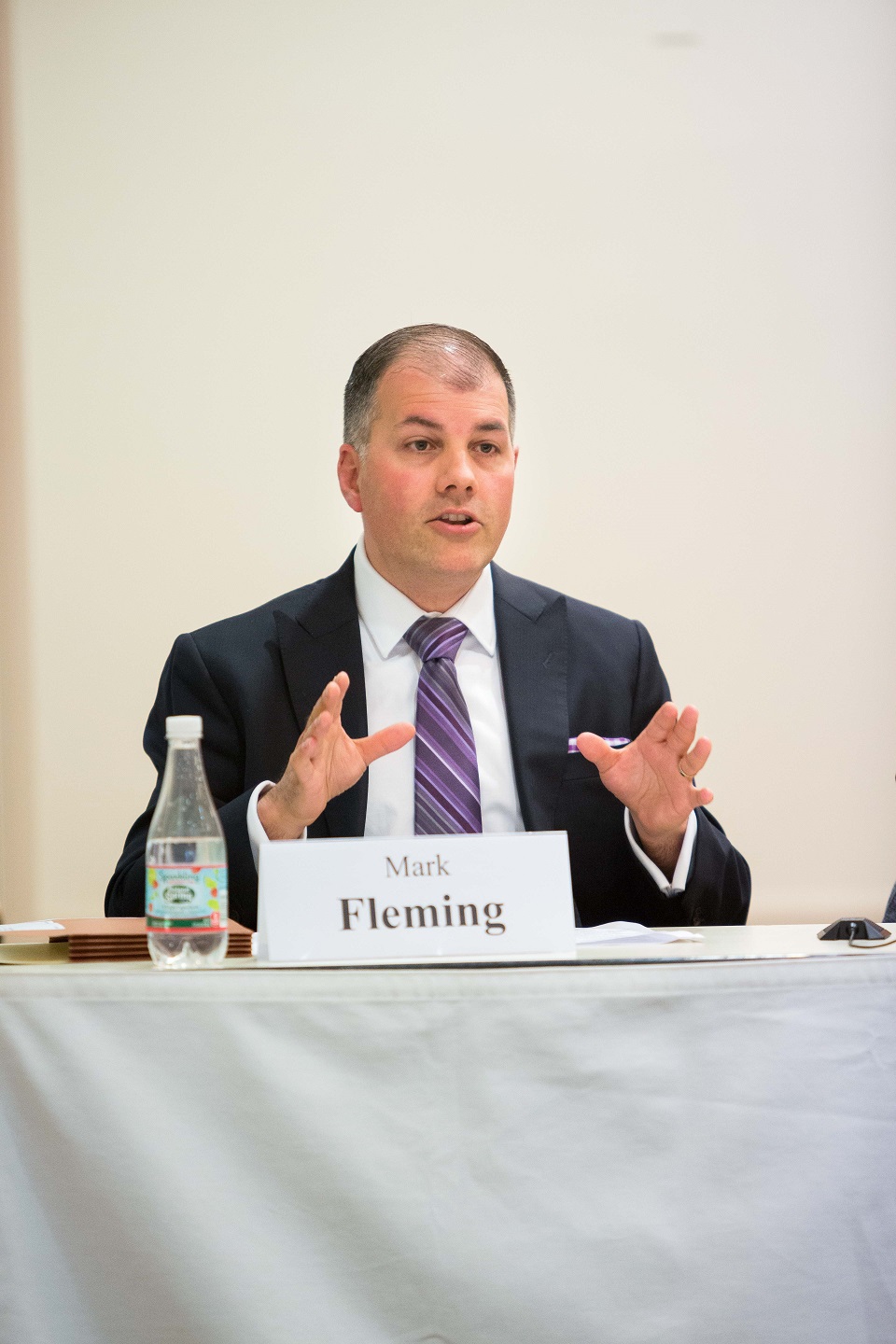 Mark Fleming gave a complete rundown of what it’s like to have your day before the Supreme Court.  It was a fascinating look at the nitty-gritty elements of this highest practice.  Here is his advice:

He also stressed the importance of knowing EVERYTHING – in one case he argued, Fleming was well served by doing his homework when a Justice asked about a case cited in an amicus brief allowing him to clarify, to a judge who clearly hadn’t gone quite that deep into the record, that the entire opinion offered less than one-half a sentence of analysis on the issue at-hand.

At that point the fun is only beginning.  Once there, you need to figure out what side you will be arguing from – generally, from the bench’s perspective, the petitioner is on the judges’ right and the respondent is on the left . . . but if the federal government is arguing (even as amicus), it and any party it supports are always on the left.  At 10:00 the Justices enter, but you still don’t get to deliver your painstakingly prepared remarks – first, opinions are delivered, and then the court handles bar admissions (“a really nice ceremonial thing” that he recommends pursuing), all before oral arguments begin.  If you weren’t stressed out before, you certainly will be by that time.  And if your case isn’t first on the docket, get enough breakfast and/or coffee to keep you going.  After your 30 minute argument flies by, you at least get a keepsake – by tradition dating back to the Court’s earliest days, goose feather quill pens are laid out on the counsel tables , which lawyers are encouraged to take as souvenirs.  Fleming brought his to show to the group. 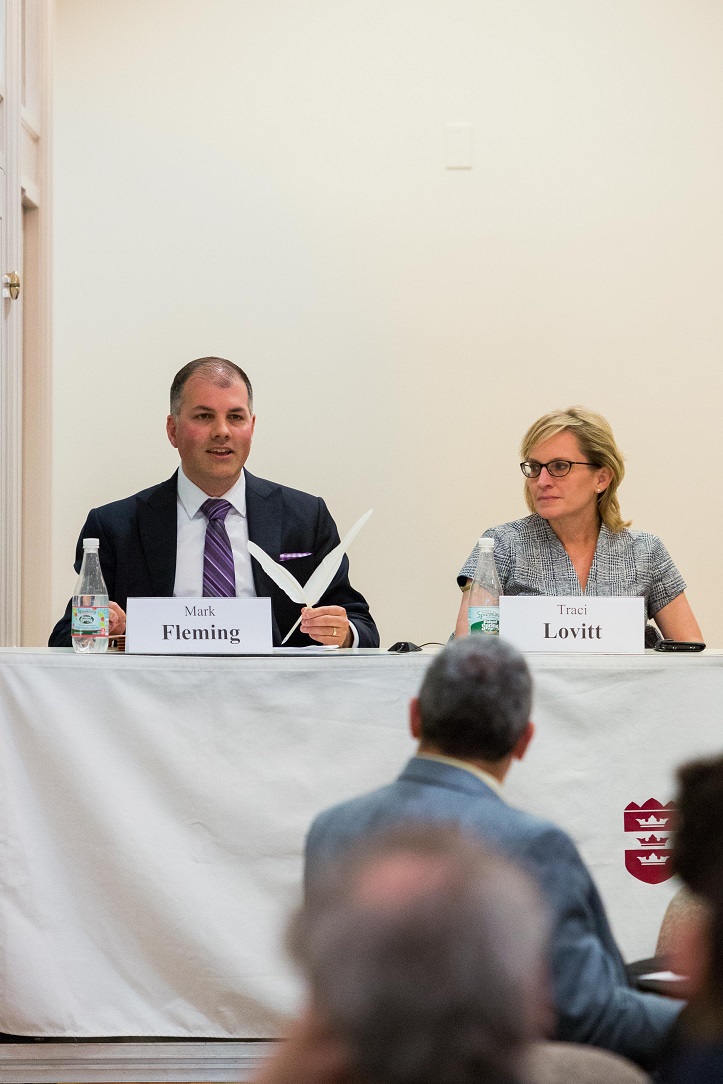 Arguing Before the Court

Traci Lovitt spoke about her experience in the Solicitor General’s office and the techniques they teach their attorneys about arguing before the Court.  Dalila Wendlandt spoke about her experience of working on a Supreme Court case as a new lawyer – so new, she had to be pulled out of her firm’s orientation to start working on the brief.  Here are their pointers for argument: 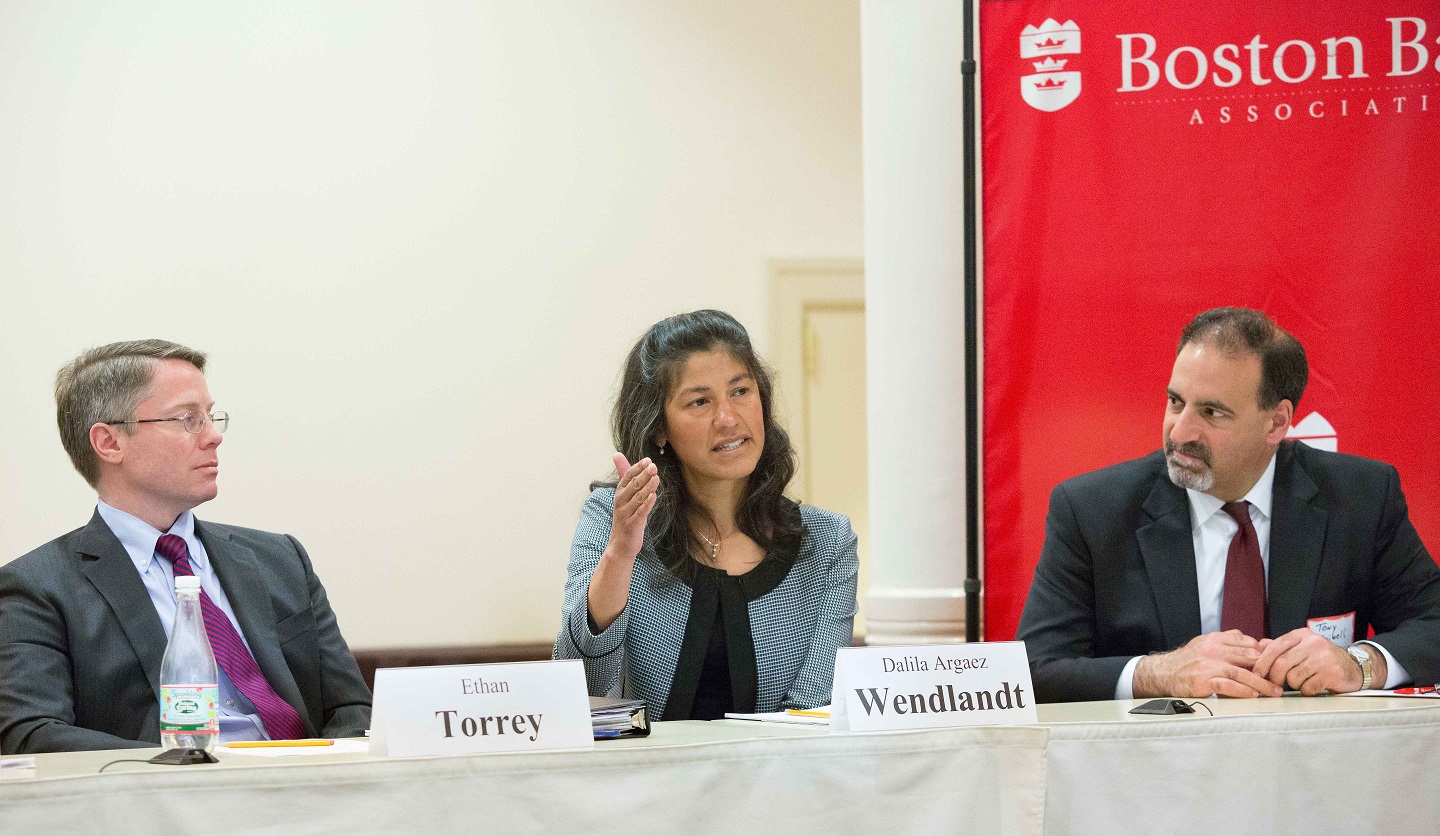 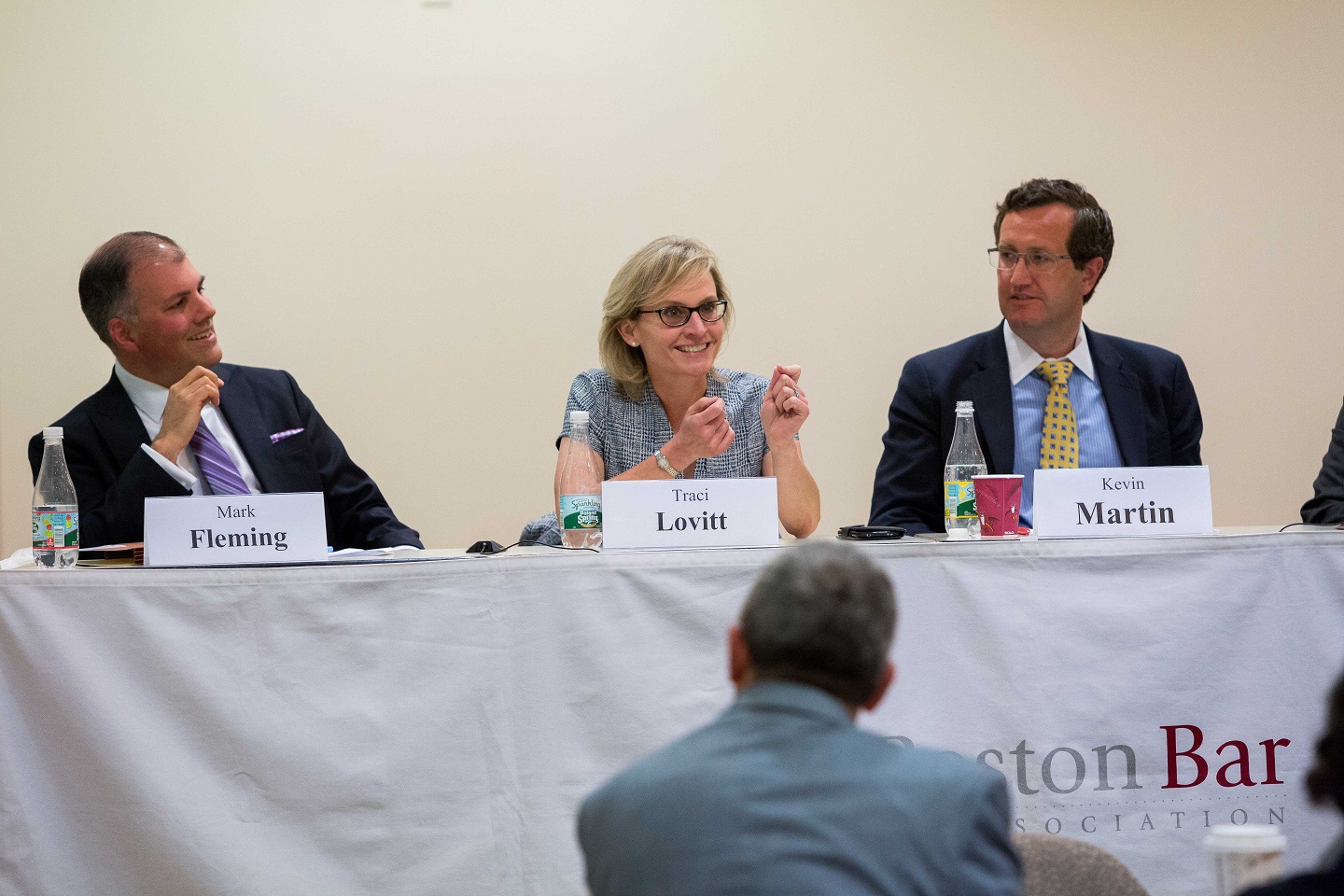 Thus, the order and form of answering is extremely important.  Lovitt was trained to give answers couched in explanation, first noting how many points she would make and even signaling the number of points with her fingers.  She then tries to give at least a short answer on each point before delving in deeper if given the time.  This roadmap answer format at least gives Justices who support your argument the tip that they can follow up if you are interrupted again, allowing you to complete your answer.

Thank you again to our panelists and moderator and to everyone who attended this fascinating discussion.