You may have heard recently that the Trial Court held a public forum to solicit input regarding online access to court records.  This week, we present the story behind that event.

Historically, attorneys, pro se litigants, members of the press, and public were all able to access court docket information online at www.ma-trialcourts.org by requesting a username and password from the courts.  However, with the installation of the new www.masscourts.org program, there have been some limitations on this access.  The program initially required a Board of Bar Overseers (BBO) number to log in, meaning it was accessible only by attorneys.  However, as of earlier this month, two Superior Court counties, Middlesex and Barnstable, made their dockets publicly available on the MassCourts website.  In all other counties, as of the time of this post, access is limited to attorneys only, though the Courts have stated that they intend to expand full access statewide eventually.  The current access situation has created concerns, especially amongst members of the media, who have alerted the public.  The group tasked with creating a rule to address such issues, the Trial Court Public Access to Court Records Committee (Committee), responded, after 19 months of meetings, by announcing a public hearing for June 15.

The Committee is composed of 22 members and includes representatives from the Trial Court and all of its departments, as well as the Supreme Judicial Court, Appeals Court, and Probation Services.  As a number of individuals pointed out at the hearing, the Committee does not include anyone from outside the courts, such as members of the public, media, or bar.

The purpose of the hearing was to receive the views of interested individuals and organizations with regard to issues surrounding the public’s access to court case records, including their online availability.  The Committee promises to then consider these concerns when drafting a rule governing records access.  The BBA is particularly concerned about the limits to records access, especially the impact they will have on pro se litigants.  We submitted a letter to the Committee, noting our concerns and our hope to be a part of the continuing review process once a rule has been drafted.

On June 15, we attended the Committee’s hearing.  Twenty-three individuals and panels provided testimony that encompassed a wide range of ideas and positions.  But the main arguments discussed can be divided into two general camps – those in favor of broad access and those in favor of limiting access in certain instances.  Both sides have legitimate concerns, meaning the Committee has a tough task ahead of them. 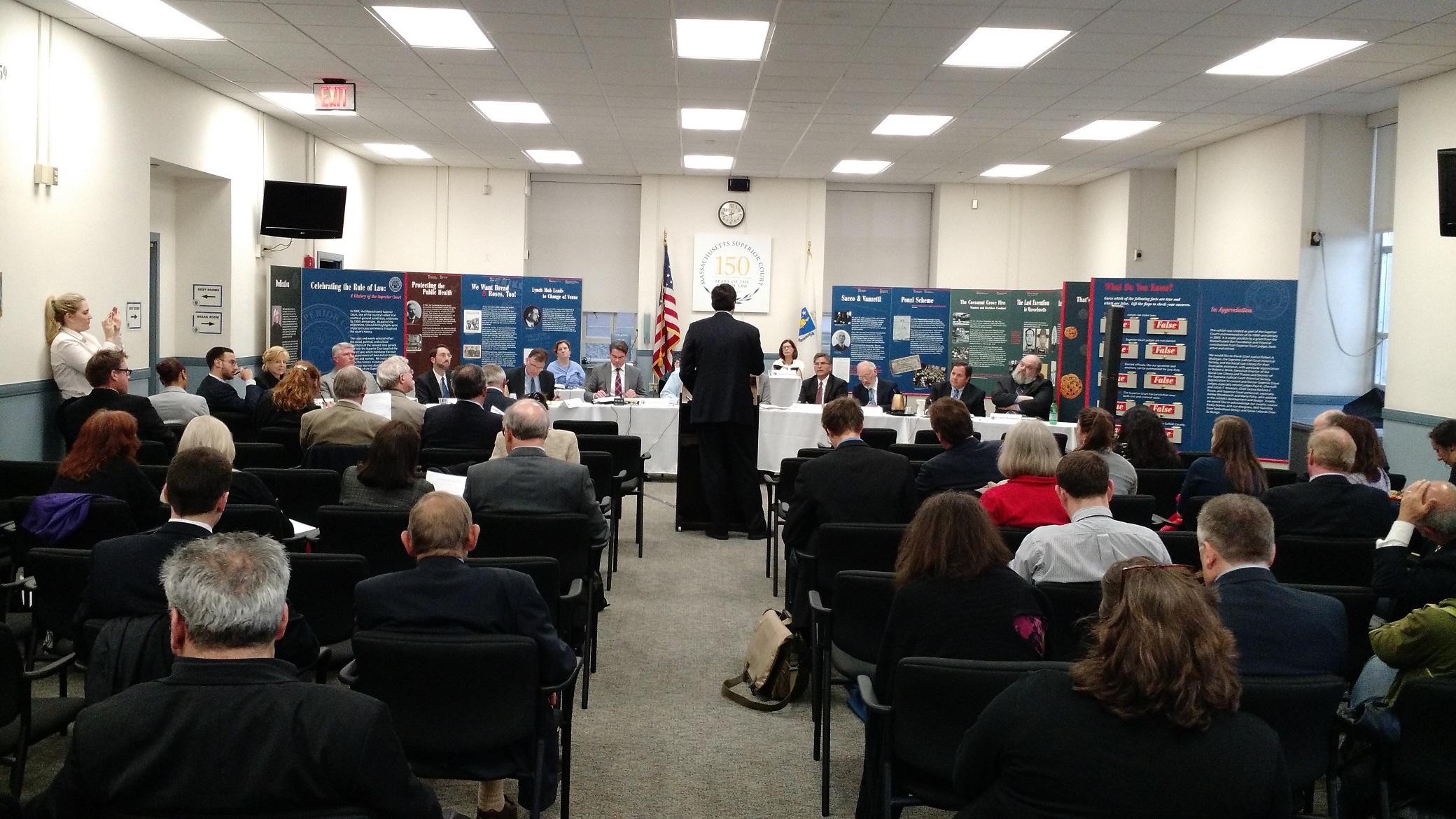 Those in favor of broad access noted that Massachusetts historically permitted online access to court records, and expressed the hope that the new policy would not be limiting.  They explained that a lot of case information is currently available at courthouses, and many felt that anything available there should also be online.  They argued that this would help the courts by lifting the burden on staff to provide visitors with paper files.  It would also help to provide a uniform process, as many offered anecdotes of widely differing policies by county or courthouse on accessing files at the court.  In addition, other states and the federal PACER online system provide broader access to court records and documents than Massachusetts.

A number of witnesses justified this request by noting that the media and public can serve as a check on fraud and corruption, and that everyone, from attorneys to pro se litigants to the public, deserves equal treatment.  Broad accessibility, they argued, would help facilitate court procedures by helping people access their dockets and schedules and would also help members of the public and media gather, compile, and disseminate useful data and statistical reports on the functioning of the justice system.  They countered fears of unintended negative consequences for litigants by putting the burden on attorneys to redact information and impound documents that could have negative implications or contain private information.

Those favoring limited access to online court records focused largely on those negative consequences the public sharing of case information can have, particularly for tenants, victims of domestic violence, and anyone with a criminal record.  For example, some landlords are said to use the system to search for prospective tenants’ names.  Even if an individual has gone to court only to force a landlord to fix a broken heater, or was merely named in a case against a roommate, they may be unfairly denied a lease.

Victims of domestic violence may be less likely to come forward if they know that potentially embarrassing details of their cases will be available online.  And if they do seek the help of the courts, putting their information online could jeopardize the safety of them or their children.  They may also face discrimination, especially in housing or employment.  The same may be true for criminal offenders whose case information would otherwise be sealed thanks to the 2010 CORI reform efforts.  Even though their records may no longer be available through official channels, witnesses expressed concern that their cases would always be available online once posted.  Many other types of cases can include sensitive mental health or financial information or highly personal family information that can be damaging if available publicly, or lead to identity theft or commercial uses by data brokers.

As a result, many called for safeguards such as the use of initials in place of party names, a protocol to correct errors, and resources devoted to assuring accuracy.  They were hesitant to place the burden on lawyers to redact and impound information because of fears that pro se litigants would disproportionately bear the consequences of a failure to do so.

In sum, the hearing provided a great opportunity for many people to be heard and for the Committee to gather valuable feedback on the issue before them and their process.  We look forward to seeing the rule they draft, and to continuing to be part of this process.  We will keep you updated on the latest developments.