It was quite a week here at the Boston Bar Association and we’ve got you covered here in case you missed any of the action.  First is a write-up from our Juvenile Restorative Justice Symposium, a half day program developed by the BBA’s 2015-16 Public Interest Leadership Program (PILP).  Further below is a breakdown of our Benefits of Judicial Diversity program followed by an explanation of a recent Appeals Court decision on reopening settlement agreements in divorce cases.

PILP assembles an annual class of young attorneys with interest in civic engagement and public service who are looking to embrace the leadership role of lawyers in service to their community, their profession, and the Commonwealth.  PILP participants connect with prominent community leaders at meetings and events, learn about the challenges confronting local organizations and take part in efforts to address specific community needs.  After completing the 14-month program, graduates enter a growing network of accomplished alumni who provide mentoring and support to their successors.

This year’s PILP class took an interest in restorative justice, a model used as an approach to criminal justice and community harm that emphasizes repairing the damage done by a criminal event as opposed to just handing down a punishment.  It is a collaborative decision-making process that brings together the offenders, victims, and other affected community members.  It seeks to hold offenders accountable by acknowledging and taking responsibility for their offenses.  Studies have shown that recidivism rates are significantly reduced for participants in restorative justice programs, and the costs are far lower than traditional court processes such as prosecution and incarceration. 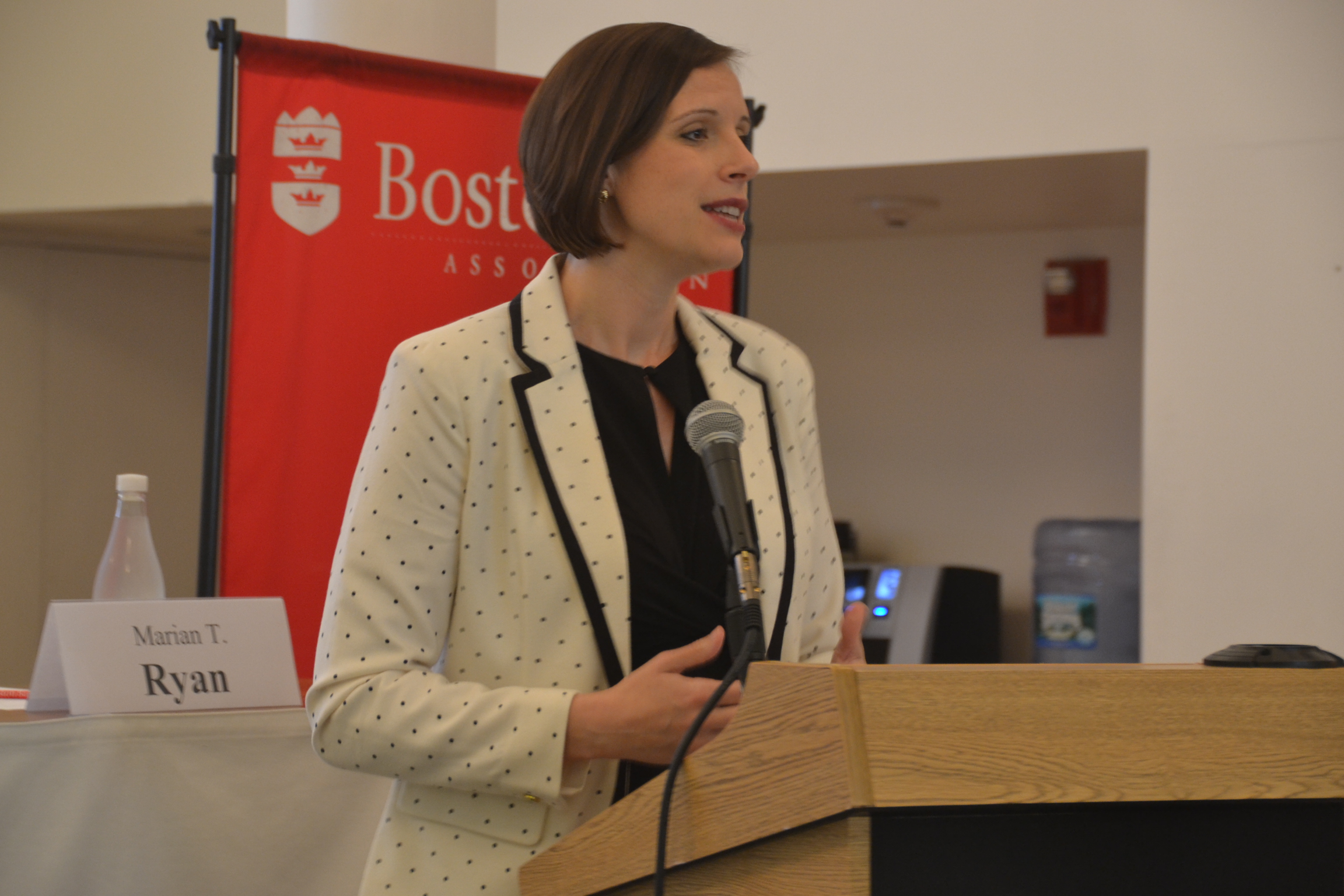 The symposium began with an introduction by Erin Freeborn, Executive Director of Communities for Restorative Justice (C4RJ).  She explained the four principles of restorative justice, a process that has existed in some form or another since the dawn of human society.  They are:

Restorative justice represents a paradigm shift in understanding and approaching justice.  It shifts the focus onto the needs of the injured party rather than a sort of generalized societal need to carry out a punishment for the offender.

Central to the restorative justice system is the so-called “circle” approach (this video includes more information on the circle process), whereby the impacted individuals sit in a circle to have a dialogue mediated by a trained facilitator who sets their expectations and lays the ground rules: 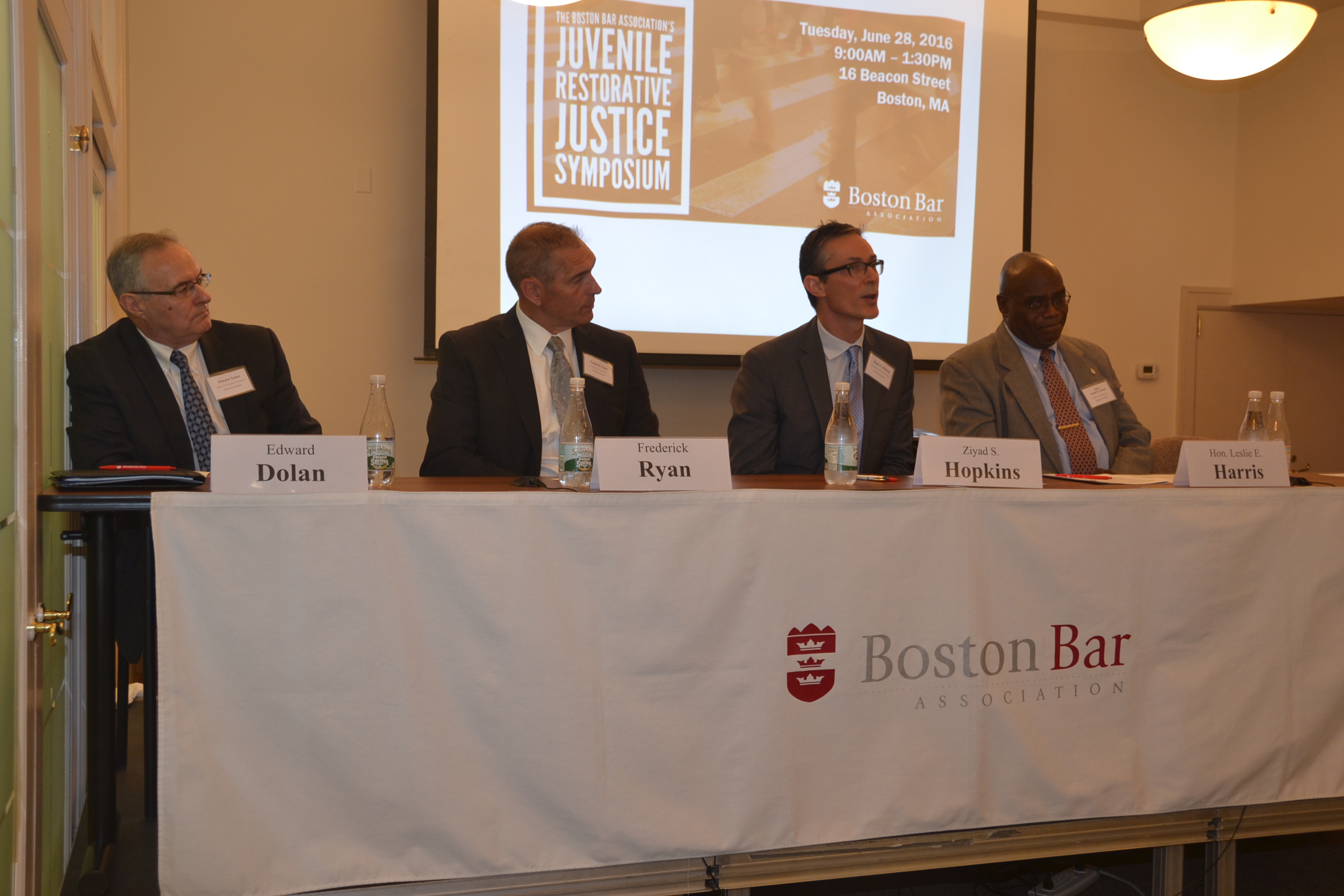 An extensive panel discussion followed with an examination of current applications of juvenile restorative justice in the Commonwealth.  It was moderated by Northeastern University School of Law Professor Susan Maze-Rothstein and featured five leaders in the restorative and criminal justice field:

The panelists began by considering the appropriateness and effectiveness of restorative justice.  There seemed to be consensus that restorative justice can and often does work better than traditional methods, and that once arraignment takes place and juveniles are given a record, their lives are forever changed, so it is especially important to consider carefully what happens before that step.  Furthermore, restorative justice can serve as a means of reconsidering juvenile justice generally and the need to discuss and change behaviors for youths.  As Commissioner Dolan explained, the traditional response was to simply remove youthful offenders from their situation and hold them in detention for a certain amount of time without providing any help to resolve the incident or underlying issues.  Now, thanks at least in part to the ideas underlying restorative justice, there is a far greater focus on intervening with a holistic approach to solve problems – both to restore balance from the incident leading to the detention and also to resolve underlying issues that prompted the behavior.

Currently, restorative justice programs vary greatly by location within the Commonwealth.  They have been implemented piecemeal in certain communities and are yet to catch on in others.  The hope seems to be that they will continue to spread on a grassroots level as more communities recognize their value and importance and that eventually legislation may provide for a uniform and adequately funded statewide system.  There currently is legislation pending (S71/H368, An Act promoting restorative justice practices), which panelists supported, though they noted that it stops short of requiring restorative justice proceedings.

The keynote speaker, First Justice of the Middlesex County Juvenile Court Jay Blitzman, has been a pioneer in the restorative justice field.  He told how his views shifted on restorative justice.  When he first heard of the idea as a “hard-charging defense attorney” he was appalled, feeling like youths were giving up their right to have an attorney stand up for their interests.  It was not until he took part in the “circle” process that he realized that in many ways restorative justice was a richer way for young people to be heard.  He found that taking part in the circle made him a more reflective listener, less judgmental, and better able to facilitate traditional justice proceedings.

He noted the importance of engaging youths through restorative justice.  The circle process gives them a voice, balancing accountability with support.  It assists the community both by solving the problem(s) at hand and by bringing the involved individuals more into the community by encouraging them to take responsibility for their actions, devise a solution, and avoid creating a record.  Justice Blitzman described a common scenario in which a juvenile is involved in a domestic violence case against a family member – typically, a parent or sibling.  These cases rarely go to trial, and are often dismissed, but once the juvenile is arraigned, they have a record which can have many negative consequences for their ability to return to their community, such as limits on housing and jobs.  He suggested that an expungement bill currently before the legislature (S64) could fix part of the problem, but noted that the better solution was to avoid creating the record in the first place through restorative justice proceedings. 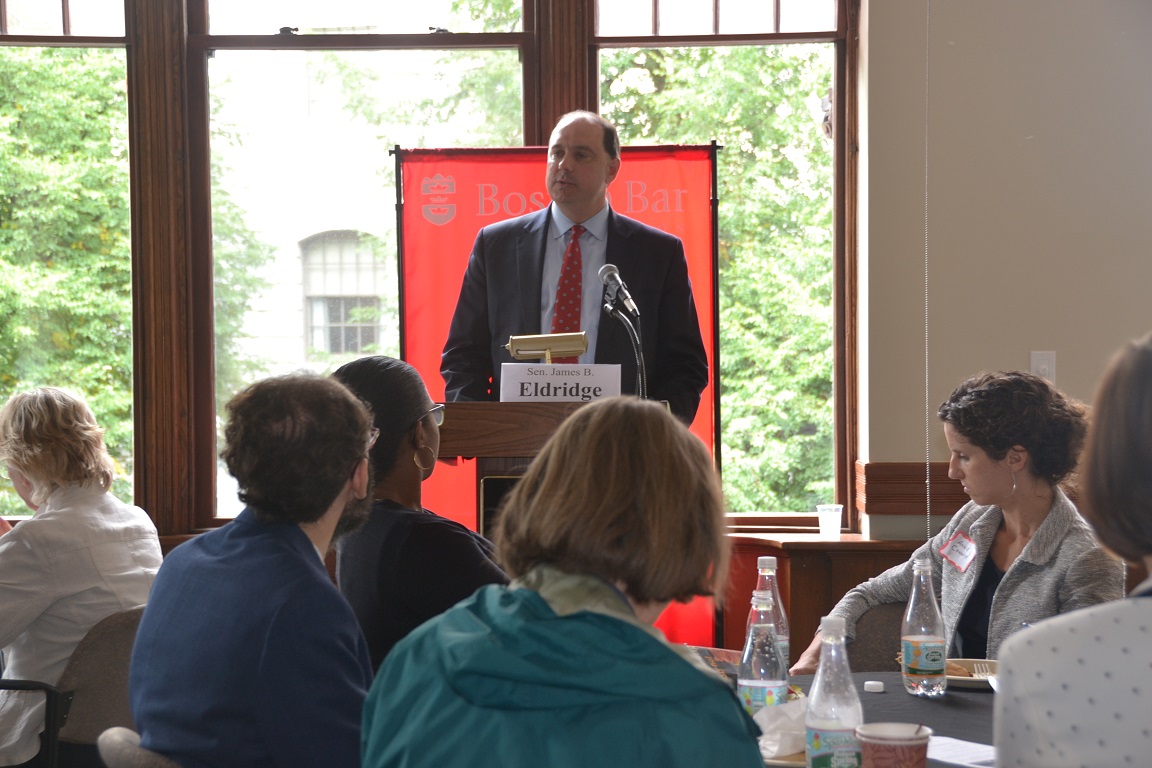 Senator Jamie Eldridge, a legislative leader on criminal justice issues and Co-Chair of the Harm Reduction and Drug Law Reform Caucus, led a lunch discussion on the future of restorative justice in Massachusetts.  He described the aforementioned bills and their status in the Legislature.  As the sponsor of restorative justice legislation himself, he was hopeful that they might move this session and encouraged attendees to reach out to their legislators to voice their support.  However, he was frank that they faced uphill battles to pass in the final month of this legislative session.  He was optimistic that restorative justice measures might be included in a more comprehensive criminal justice overhaul that he predicted would come next legislative session following the full report of the Council of State Governments, which is conducting an in-depth review of the current criminal justice picture in Massachusetts at the request of Governor Charlie Baker, Speaker of the House Robert DeLeo, Senate President Stanley Rosenberg, and Supreme Judicial Court Chief Justice Ralph Gants.

In all, the symposium was a huge success.  The discussion was lively and informative and we are proud to be at the forefront of considering this issue.  We will, as always, keep you posted on what happens with the relevant legislation this session and look forward to reporting on forthcoming criminal justice reforms.