Cracking Down on Labor Trafficking

We were pleased this week to host an enlightening panel discussion on the important topic of labor trafficking.  The conversation was moderated by Alec Zadek of Mintz, Levin, Cohn, Ferris, Glovsky and Popeo, and Erin Albright of the International Institute of New England, a co-chair and member, respectively, of the BBA’s Human Trafficking Sub-Committee, which has sponsored a series of events highlighting the issue. 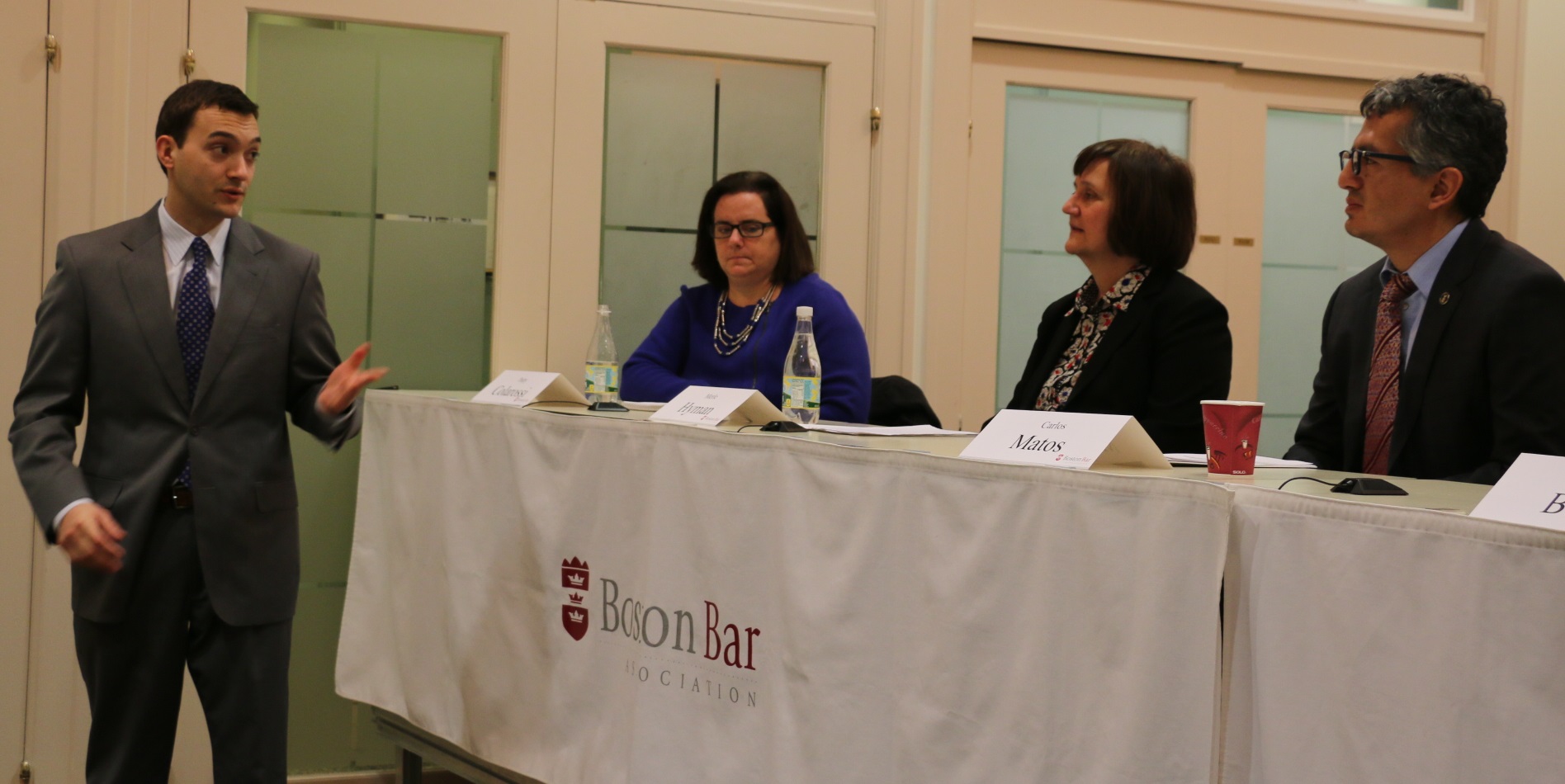 The broader topic of “human trafficking” has justifiably been receiving increased attention lately from the media, law enforcement, and elected officials.  But in the public’s mind, the term tends to conjure up, specifically, victims of the sex trade.

The other side of human trafficking, involving forced labor that is not necessarily sex-related, typically ensnares immigrant workers – whether those who are here with tenuous legal status or those who were brought to this country on false promises of legitimate, above-board employment.

The BBA’s Labor & Employment Law Section and the Human Trafficking Committee of our Delivery of Legal Services Section co-hosted a conversation with four representatives from the U.S. Department of Labor’s Wage & Hour Division.  Carlos Matos, District Director of DOL’s Wage & Hour Division for the Boston District Office, led off with a review of the agency’s various responsibilities and its interaction with human trafficking.  DOL has broad jurisdiction to enforce labor laws and conducts its own civil investigations, frequently in conjunction with the local U.S. Attorney’s office, to uncover workplace violations. 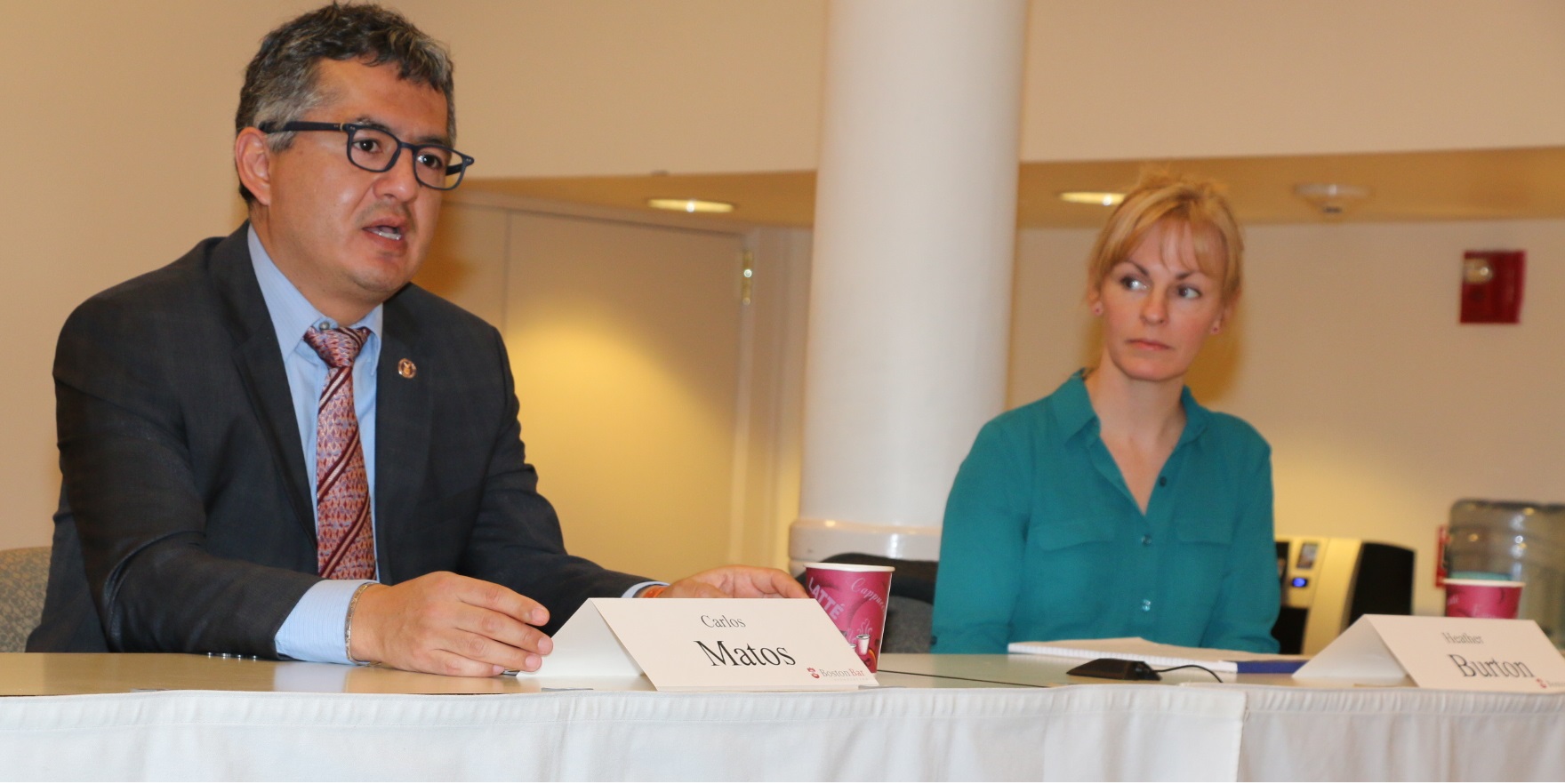 Matos expressed his concern over recent trends in the employer/employee relationship — in particular, what he termed “fissured industries,” where the use of franchises, third-party management, and contract labor can introduce layers of separation between employer and employee and fray that relationship, leading to an increase in complaints about minimum-wage and overtime payments.

DOL doesn’t directly enforce labor-trafficking laws, but they do encounter such violations in the course of their work.  Matos stated that they have been undertaking more strategic enforcement of late, pro-actively targeting priority industries, with a high rate of vulnerable workers and low wages – think, restaurants, construction, health care, and seafood processing.  They talk with employees and have multi-lingual investigators on staff for non-English-speakers.

Merle Hyman, a Wage & Hour Counsel at DOL, talked about a recent case in which a married couple brought a woman to the U.S. to work for them as a domestic employee, then proceeded to force her to put in 100-plus hours per week and barred her from leaving the house.  Five or six years into this unlawful arrangement, the woman finally confided to someone, DOL was ultimately notified, the matter was referred to the U.S. Attorney, and the couple agreed to pay all back wages to the worker, who received a T-visa that allowed her to stay here as the victim of serious human-trafficking violations.

The case illustrates a few key points about DOL’s efforts in this area:

Heather Burton, a Wage & Hour investigator, who works with victims and their counsel with respect to visa status, is often the first line of contact with exploited workers.  She is working on reducing a backlog of visa requests, which require certification that applicants were victims of one of eight specified criminal labor laws that DOL enforces – a prerequisite for a U-visa.  Both T- and U-visas grant work permission for four years and offer a pathway to full legal status, and this is an area where attorneys can help applicants.

So long as DOL has an active investigation open, the Department of Homeland Security may not remove a worker who’s involved with the case.  One complication, however, is that an employee implicated in the misconduct, by virtue of having collaborated with the employer, may apply for visa status by claiming instead to have merely been a victim.

Burton said she’s been seeing a rise in fraudulent foreign-labor contracting; workers arrive here only to find that the advertised job doesn’t exist, or is vastly different from what was described.  Another common theme in her work is witness tampering, with employees being sent home or hidden, to keep them from speaking with DOL investigators on-site.

On the whole, DOL is now more cognizant of trafficking crimes, with more trainings for staff and more standing task forces on the issue.  Investigators know the key questions to ask, so as not to miss instances of exploitation, and they are working cooperatively with other federal agencies, such as the Occupational Safety and Health Administration and the Equal Employment Opportunity Commission.

Although DOL does not work directly on trafficking cases, the panel asked that attorneys contact them straight away if they learn of any possible violations.  And any attorney interested in getting involved with prevention of human trafficking or protection of victims should contact Alec Zedek (Mintz Levin), who, along with Manleen Singh of Robins Kaplan co-chairs the BBA’s Human Trafficking Sub-Committee.