This Veterans Day, while we give thanks to the many veterans and their families who have sacrificed so much to assure our safety and security, we wanted to take the opportunity to report on our visit to Veterans Treatment Court.  You may recall that last year, BBA President Lisa Arrowood visited a number of Specialty Courts, including Judge Eleanor Sinnott’s Veterans’ Treatment Court (read about her visits to Drug Court, Mental Health, and Homeless Court).  She was so impressed by her experiences that we honored the Specialty Courts at our annual Law Day Dinner this past spring.

In case you aren’t familiar with them, so-called Specialty Courts are court sessions dedicated to resolving certain issues underlying criminal behavior and/or treating certain populations.  There are several types of specialty court sessions:

They provide court-supervised probation and mandated treatment focused on treating mental health or substance abuse issues in the defendants’ lives.  Judges balance treatment and accountability for participants – considering the entirety of concerns they face and meeting with them frequently to monitor and work on solving the problems underlying their criminal behavior.  Judges provide support and oversight, working with probation officers who provide intensive supervision and Department of Public Health clinicians who help participants to access effective treatment and therapy.

There are 36 Specialty Court sessions in District and Boston Municipal Courts throughout the state, including 23 drug courts, five veterans’ treatment courts, and eight mental health courts.  They have received funding through the state budget since FY2015 ($3 million).  They were level funded this past year at $3.2 million after receiving a $230,000 increase in FY2016, despite the Trial Court requesting a $2.8 million module to fund expansion efforts. 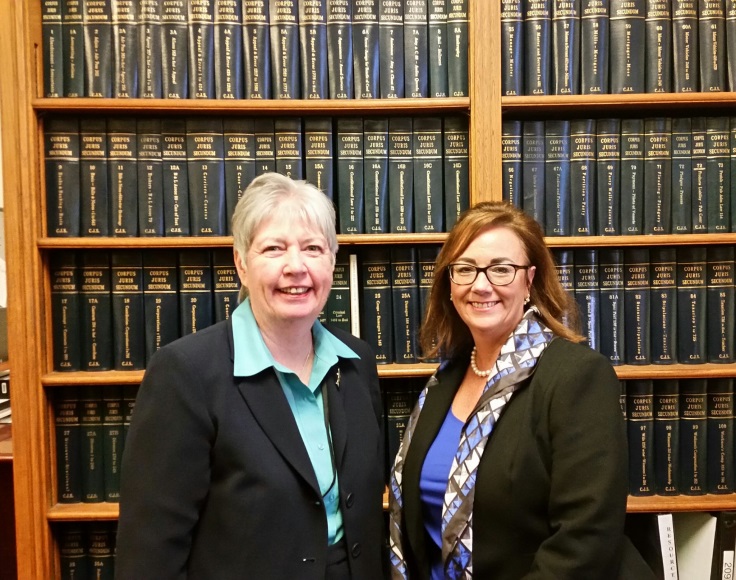 BBA President Carol Starkey jumped at the chance to see the Specialty Courts firsthand.  On November 1, she spent the afternoon at Judge Mary Hogan Sullivan’s Veterans’ Treatment Court in Dedham District Court.  Judge Hogan Sullivan serves as Director of Specialty Courts for the District Court Department and established the Norfolk County Veterans’ Treatment Court in 2012, the first of its kind in Massachusetts.  As described on the court’s website:

Veterans’ treatment courts are designed to handle criminal cases involving defendants who have a history of military service through a coordinated effort among the veterans services delivery system, community-based providers, and the court. The sessions aim to improve public safety while dealing with the underlying issues of posttraumatic stress disorder, traumatic brain injury, and military sexual trauma.  Abstinence from drugs and alcohol, mandated treatment, swift accountability, and weekly interaction with the court are requirements of the Veterans Treatment Court.

The program typically requires a 12 to 24 month commitment, which must be voluntarily given by the participant who also must agree to participate in “any and all” court recommendations.  Participants must have at least completed basic training to be eligible.  However, it is open to all veterans regardless of their discharge status, though only those with honorable discharges can access certain Veterans Affairs (VA) benefits the court has access to.  Its stated mission is: “To support veterans and their families through a coordinated effort among the veterans services delivery system, community based providers, and the Court, thereby improving public safety while leaving no veteran behind.”  This packet from the court has extremely detailed information about the process and procedures it follows.

We had the pleasure of meeting with Judge Hogan Sullivan prior to the session.  She candidly explained that Veterans’ Treatment Court is “the most challenging thing I’ve ever had to do.”  She thinks of her court as basically a hybrid between mental health and drug courts, though it has some further complicating factors that those courts do not, such as higher occurrences of certain mental health afflictions like post-traumatic stress disorder (PTSD) and depression.  It also often has to address violence issues, many related to guns, unsurprisingly since they are a staple of military service.  Because of the intensiveness of the program, the court can accommodate only about 30-35 individuals at a single time.  While most of the recommendations for program participation come from probation, some also come from defense attorneys, whom we hope will increasingly recommend the court for their clients as a way to secure services and decrease the potential for recidivism.

Judge Hogan Sullivan compared her process to peeling an onion – her team peels through issues, treating them layer by layer at the appropriate time and in the most effective ways.  Most of the defendants come to court weekly unless they are in residential treatment programs.  Once there, they benefit from the assistance of a defense attorney, probation officer, clinician, veteran outreach worker, and even the prosecutor plays an important role.  They are also assigned a volunteer veteran mentor who is not involved in their cases, but is simply there to provide life support and understanding for the issues unique to their experiences.  This team talks regularly over the course of the week and meets for upwards of 90 minutes prior to open court, during which they discuss in detail the challenges, successes, and setbacks experienced by the program participants.  It was impressive to see how well they understand and care about the individual issues faced by each participant and how devoted they were to coming up with the most appropriate and effective solutions.

While the investment in personnel time and services are high, the results are remarkable.  Graduates of Judge Hogan Sullivan’s Veterans’ Treatment Court have a recidivism rate of about 11.5%, while the average rate in Massachusetts is between 40 and 50 percent.  In its nearly 4 years of operation, only two people have picked up new charges since graduating, and while a handful more have relapsed with drug addiction issues, they have sought the help they needed before turning to the criminal behavior that put them in the justice system in the first place.

Yet, despite the tremendous devotion of the staff and hard work of the veterans involved, the court is held together on a shoestring budget.  They struggle to reach veterans who have lost their drivers’ licenses due to their criminal sanctions and have trouble accessing public transportation to the court or treatment services because there is no funding to assist them.  There isn’t even enough money to be able to provide graduates with certificates or awards at the end of their grueling period in the program.  Judge Hogan Sullivan recognizes the importance of being able to offer participants carrots in addition to the stick of stepped up sanctions and so purchases a supply of business cards saying simply “Congratulations, you did exactly what we asked of you” which she gives out exceedingly sparingly to assure they carry special sentimental weight.

In all, our day at Veterans’ Treatment Court was eye-opening and moving.  We applaud the remarkable work being done by Judge Hogan Sullivan and her team in Dedham.  Stay tuned next week to hear about our visit to Bridges, Judge David Weingarten’s Mental Health Session in Roxbury District Court.