Each April, BBA leadership treks to Washington, D.C., along with bar leaders from all 50 states, for ABA Day, the American Bar Association’s annual lobbying event.  This year, as usual, the primary focus of our efforts was on funding for civil legal aid.  And though federal appropriations were under threat at the time of our trip last week, by this week we had received welcome news—from both the Capitol and the State House.

First, a refresher: The Legal Services Corporation (LSC) is the nation’s leading funder of civil legal aid programs, with an annual appropriation of $385 million, of which about $5 million comes to four different providers in Massachusetts.  That budget is not nearly enough: It’s been essentially level-funded for years, even as the need for legal services has increased significantly, and one result is that an estimated 50 to 80% of qualified applicants must be turned away merely for lack of resources.

That’s why it’s critical that lawyers, who are at the front lines of this crisis, continue to make the case for LSC and civil legal aid.  The threat was even greater this time, after a White House budget plan proposed eliminating (or “zeroing out,” in budget-speak) LSC funding altogether.  A $5 million hit to legal services in Massachusetts alone would have been devastating—all the more so when you consider that the budget also sought deep cuts in services elsewhere, cuts that would’ve further increased the need for legal services.

All of this had legal-services providers on edge and lent a sense of urgency to this year’s ABA Day (which, full disclosure, takes place over three days). So it was nice to kick the event off with an awards ceremony for four members of Congress who’ve led the fight on ABA priorities, including our own Representative Joe Kennedy. 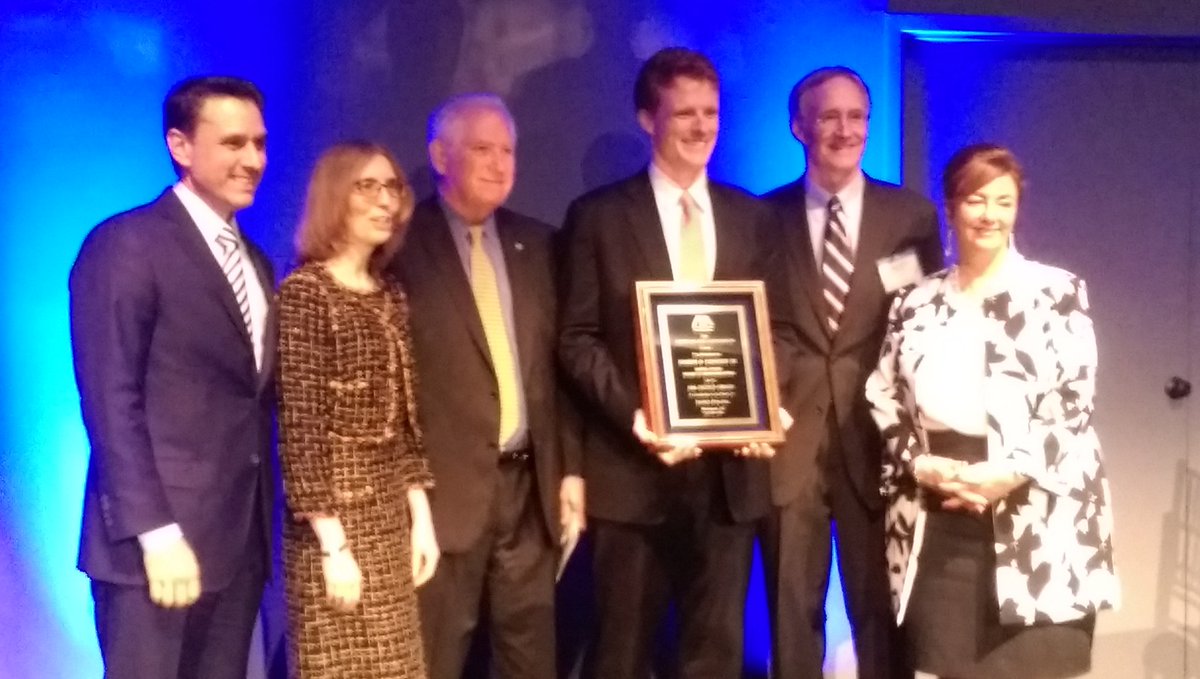 We’re proud of Rep. Kennedy for making this a priority and we were not only delighted to nominate him, along with the Massachusetts Bar Association, for an ABA Justice Award in recognition of his steadfast work to promote funding for legal aid and to end discrimination, but also thrilled to learn he’d been chosen as one of this year’s honorees.  To cite just one example of his commitment, Rep. Kennedy established a bipartisan Access to Civil Legal Services Caucus.  (The next morning, at an ABA breakfast, we heard from his caucus co-chair from across the aisle, Rep. Susan Brooks of Indiana.)

In receiving the award—after needling ABA President Linda Klein, of Atlanta, about the Super Bowl—Rep. Kennedy told the audience how his time as a young attorney with Greater Boston Legal Services had opened his eyes, allowing him to see the justice system through the eyes of his clientele: that is, as a complex maze that they couldn’t always navigate successfully without legal assistance.  He spoke of civil legal aid as a lifeline for working families—one that we need to fight for now more fiercely than ever before.  He thanked the BBA and MBA for making it such a priority, and he closed by saying, “Our laws reflect the promises we make.  Our justice system reflects the promises we keep.”  (Of course you already know this, because you followed my live-tweeting, right?)

With that event fresh in our minds, we headed off the next morning for a full day of meetings with the Massachusetts Congressional delegation.  To be clear, we have it much easier than the ABA Day participants from most other states, in that all our representatives stand with us four-square on LSC funding.  Our counterparts from elsewhere had their work cut out for them, educating their elected officials on the importance of, and the imminent threat to, the appropriation for civil legal aid.  Meanwhile, our group—including the BBA’s President, Carol Starkey of ConnKavanaugh, and President-Elect, Mark Smith of Laredo & Smith, along with their opposite numbers from the MBA, Jeff Catalano of Todd & Weld and Chris Sullivan of Robins Kaplan—had the opportunity to convey our appreciation for the delegation’s consistent support on our issues.

This extends not only to LSC, but also to the other top priority for ABA Day this year: access to justice for homeless veterans.  While the nation has made progress in recent years toward eliminating homelessness among our veteran population, there remain 39,000 homeless vets on any given night—and a staggering 1.5 million who live in poverty.  They face legal problems that are common to the poor, but also problems that stem directly from their service.  For example, time overseas—and, in particular, service-related disabilities, both physical and mental—can undermine a veteran’s ability to address legal issues when they arise, and if allowed to persist, these legal problems can become total barriers to critically-needed help. 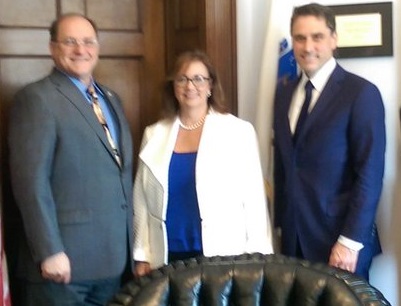 Carol Starkey and Jeff Catalano with Rep. Mike Capuano,
a strong supporter of civil legal aid, as well as access to justice for homeless veterans

So on behalf of the ABA, we urged our members of Congress to enact the Homeless Veterans Legal Services Act, which would expand access to legal services for homeless veterans, and veterans at risk of homelessness, by authorizing the VA to partner with public and private entities and fund a portion of the cost of legal services.

That night, we attended an ABA reception at the Supreme Court, where Justice Elena Kagan spoke from the heart about advocacy for legal aid (“You are doing the Lord’s work,” she said), awards were given to Kids in Need of Defense (KIND) and long-time supporter Edwin Harnden of Barran Liebman (Portland, Oregon), and attendees more or less had the run of that historic building. 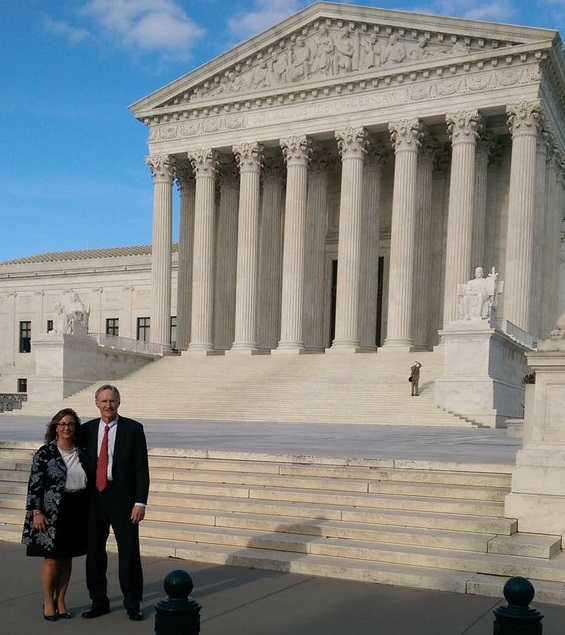 Carol Starkey and Mark Smith outside the US Supreme Court

ABA Day closed with a breakfast on our third day, where we got to hear from James Burnham of the Office of White House Counsel, who spoke about the work of his office, including the appointment of federal judges.  (We’ll have a new nomination for the bench in Massachusetts, with Judge George O’Toole, Jr., moving to senior status after 35 years as a state and federal judge.)  And finally, we were entertained by Minnesota Senator Al Franken, who made clear his fierce opposition to zeroing out LSC funding, calling such a move “callous”, “short-sighted”, and “penny-wise and pound-foolish.”   “We’re not gonna let that happen!” he pledged. 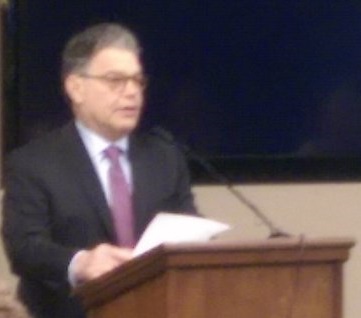 Sen. Al Franken: Eliminating LSC funding would be “callous”, “short-sighted”, and “penny-wise and pound-foolish” and “we’re not gonna let that happen!”

And with that, we were off.  But, oh yeah, I saved the best news for last: