Last week, we made our annual trip to Washington, D.C., for the 20th ABA Day—the annual event that brings bar-association leaders to the capital for three days of meetings with members of Congress and their staffs, trainings and briefings, awards and speeches, and mingling with lawyers from across the nation. 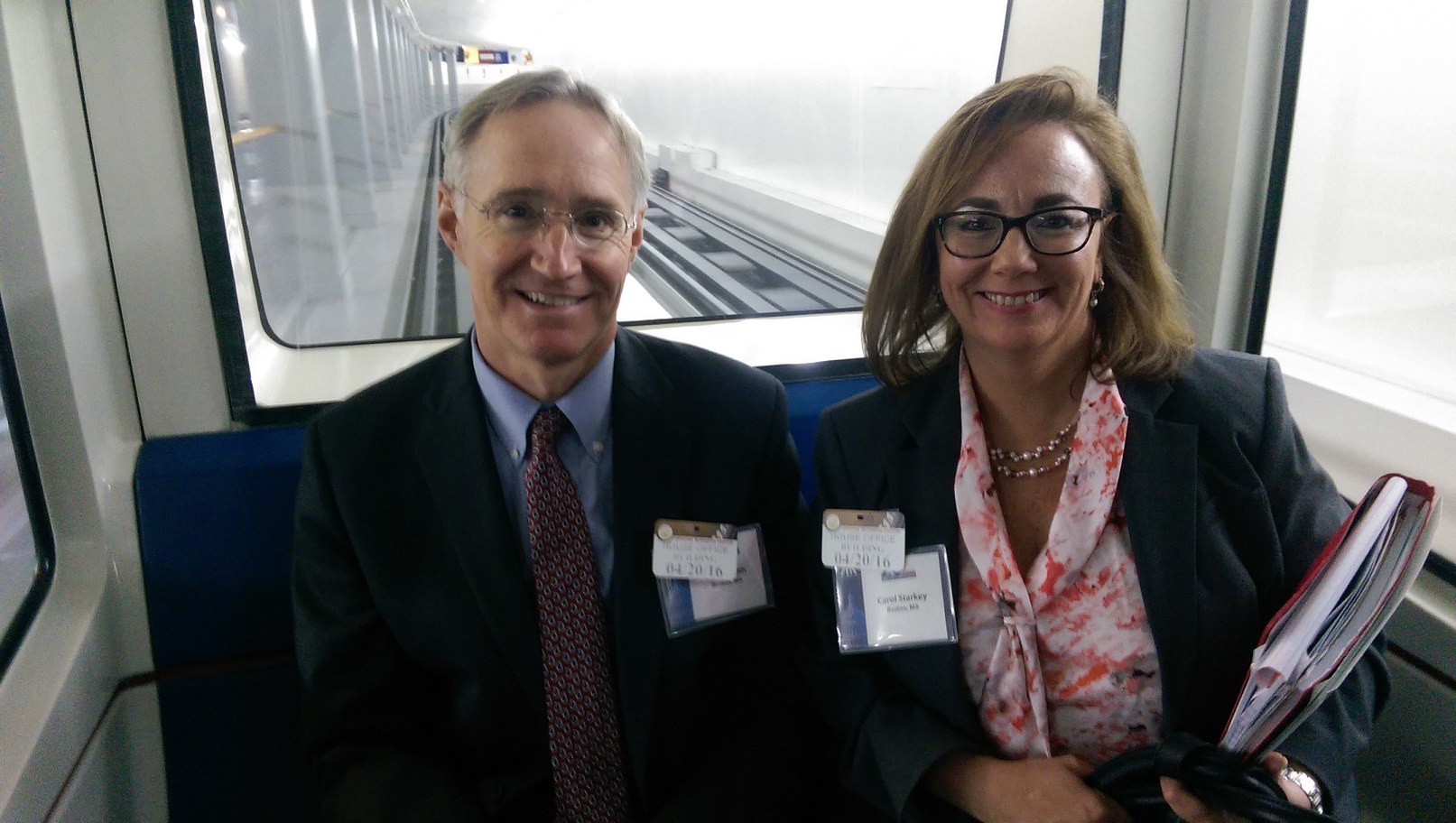 Mark Smith and Carol Starkey on the US Capitol Underground Tram

This year, the BBA was represented by President-Elect Carol Starkey, of Conn Kavanaugh, and Vice-President Mark Smith, of Laredo & Smith.  They were joined in Washington by the MBA President Bob Harnais and Vice-President Jeff Catalano.  In one whirlwind 24-hour period (all right, make that 26 hours, to be precise), the group visited the offices of 10 out of our 11 Senators and Representatives, to advocate on issues of great importance to both the ABA and the Massachusetts bar.

One constant theme of ABA Day, year after year, is the importance of federal funding for the Legal Services Corporation (LSC), which in turn doles out support to legal-aid organizations at the state level.  In the current FY16 budget, the ABA was able to secure a $10 million increase in LSC’s appropriation—no easy lift at a time of fiscal restraint and polarization in Congress.  For FY17, with current funding still 15.7% lower than it was in 2010 (inflation adjusted), we argued for a substantial increase, from $385 million to $475 million.

In making this case to our delegation, we were helped once again by the October 2014 report of the BBA’s Statewide Task Force to Expand Civil Legal Aid in Massachusetts, which found that—in addition to being the right thing to do, to offer legal assistance to low-income residents in need and to reduce delays in our courts—increased funding for legal aid produces a return on investment, by saving the government on “back-end” costs such as health care for domestic-violence victims, emergency shelter after evictions or foreclosures, and foster care for children.  (We continue to use this report as the basis of our campaign for state funding for the Massachusetts Legal Assistance Corporation.  Stay tuned until next week for an update on this and all our other budget priorities.) 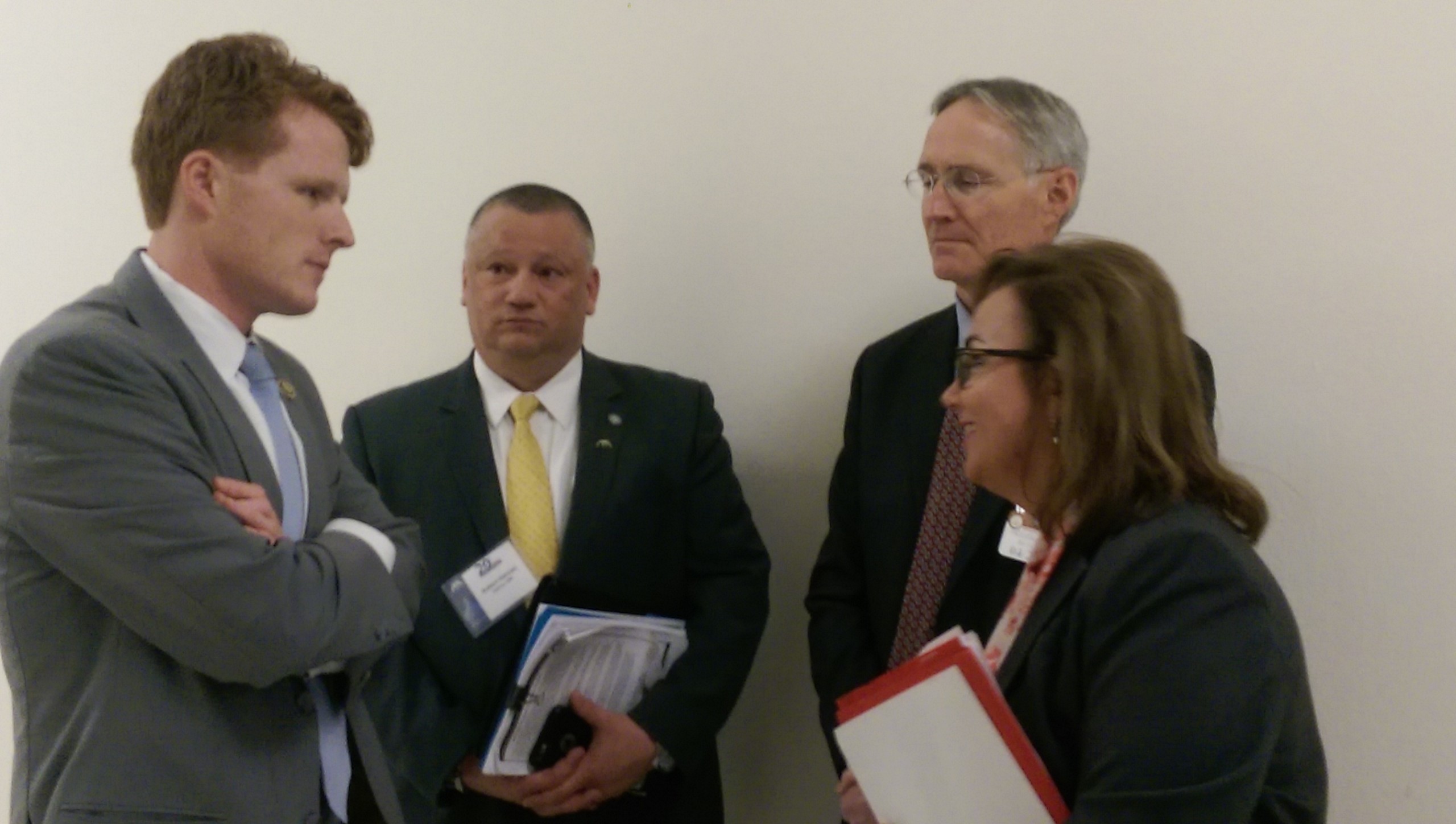 One of the leaders on this subject in Congress is our own Rep. Joseph P. Kennedy III (Brookline), who co-founded the bipartisan Access to Civil Legal Services Caucus this past fall, alongside a GOP colleague from Indiana, Rep. Susan Brooks.  At one of the ABA Day breakfasts, we heard Rep. Kennedy give an impassioned speech about the critical importance of legal aid.  Later that day, he ducked out of a committee mark-up session to meet with us.

The second issue we discussed with our elected officials was criminal-justice reform.  The ABA has endorsed legislation pending in Congress to address sentencing of both adults and juveniles.  This is an area that has seen tremendous movement in recent years, with dozens of states taking action to restructure their criminal-justice systems so as to relieve over-incarceration, reduce expenditures, and promote successful re-entry—all while protecting public safety.  (Here in Massachusetts, a similar effort is underway, with leadership from all three branches of government working with the Council of State Governments on a year-long comprehensive review that is expected to lead to legislation early next year.)

We were told by a number of legislators that there is a growing bipartisan consensus in support of such bills, with the main lingering questions being how to address the fine print, and whether enactment might happen in the near-term, during a Presidential campaign, or will have to wait until a lame-duck session after the election.

The last item on our agenda, in meetings with our delegation, is mandatory accrual accounting for law firms and other types of personal service businesses, which would have a deleterious effect, especially on smaller firms, by requiring them to book revenue, and pay taxes on it, even before it has actually been received.  This was proposed a few years ago, but thanks to a concerted campaign by the ABA—in which the BBA took part—it was shot down.  However, no idea is ever truly dead in Congress, and we must remain vigilant in case such language re-emerges.  For that reason, it’s important to convey to our representatives that the issue is still on our radar screens.

Fortunately, all Massachusetts Senators and Representatives who were in office during the last session signed onto a letter opposing mandatory accrual accounting, so we know we have their support on this should we need it.

In fact, we enjoy support virtually across-the-board from our delegation on all these priorities.  So for the BBA and the MBA, unlike representatives from many other states, these visits are not about changing minds but rather about conveying our appreciation for their positions.  We have it relatively easy compared to, say, ABA President-Elect Linda Klein, who spoke at one event about the challenge of trying to persuade some members of Congress from her home state of Georgia. 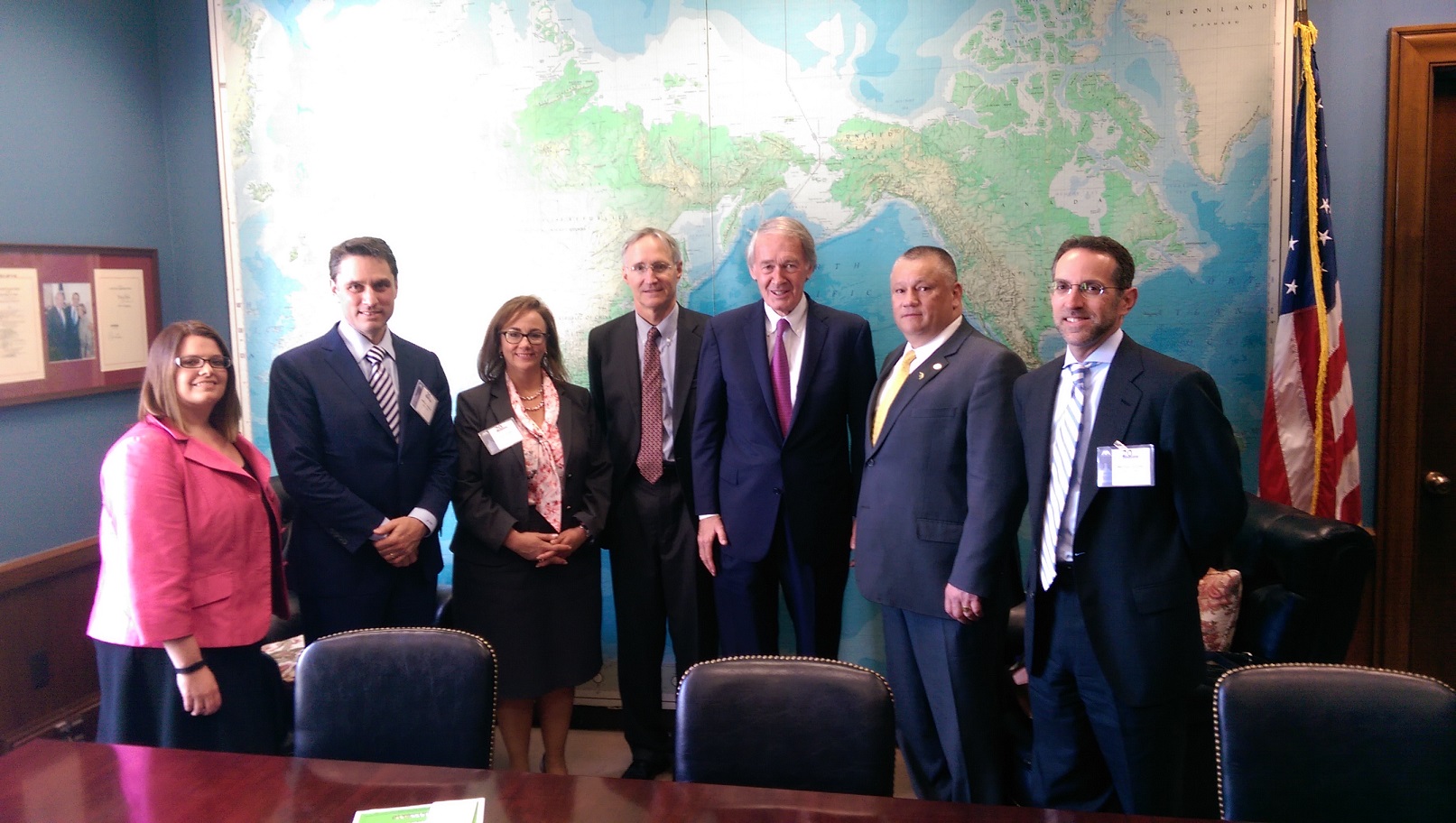 Regardless of the circumstances, it is always a pleasure to have a chance to sit down with national leaders like Sen. Edward Markey, who spoke about two legal internships he held while at Boston College Law School.  Those experiences demonstrated to him first-hand the importance of providing legal representation to low-income residents, and they undergird his long-standing support for legal-aid funding.  He also expressed dismay that the crushing burden of law-school debt is driving too many new attorneys away from public service—the path he chose—after graduation. 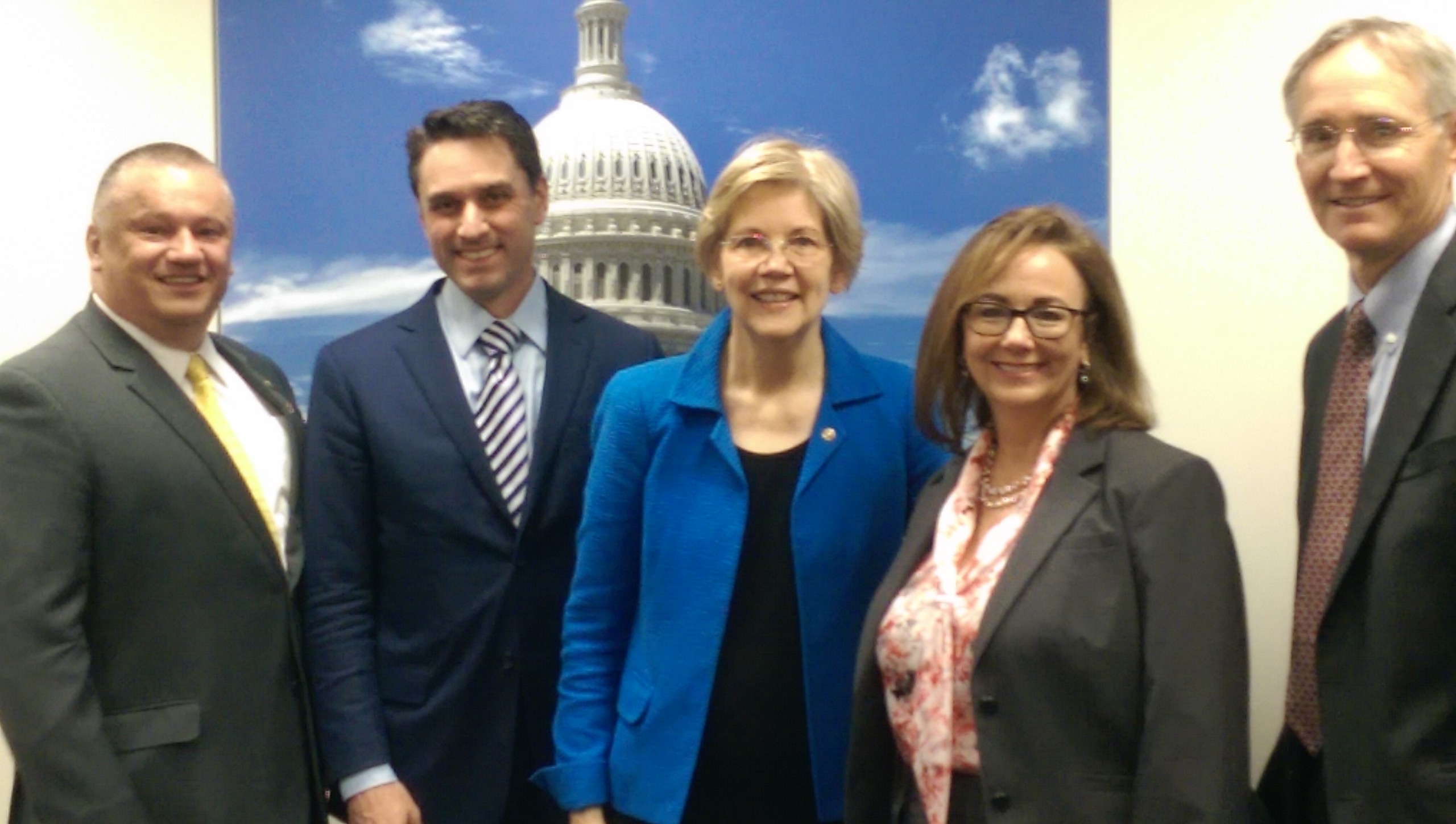 As an expert in bankruptcy, Sen. Elizabeth Warren understands how legal-services attorneys created the common law around the then-new bankruptcy law 25 years ago, back when there was much more funding; now, the federal government doesn’t provide money for legal services to take on bankruptcy cases.  Sen. Warren called the LSC appropriation “crumbs” in the context of the federal budget, and assured us that she’ll continue to fight for a justice system that “feels fair”—not one that works only for the wealthy.  Her commitment to legal services is demonstrated by her recent hiring of Stephanie Akpa as Counsel.  Stephanie previously worked for the Legal Aid Society of the District of Columbia and is advising the Senator on Judiciary Committee matters, such as the sentencing reform we had come to advocate for.  Sen. Warren noted that while most Senators use their limited office payroll for staffers to the committees on which they sit, she chose instead to assign Judiciary to Stephanie because of the priority the Senator places on those issues, even though she is not a member of that committee. 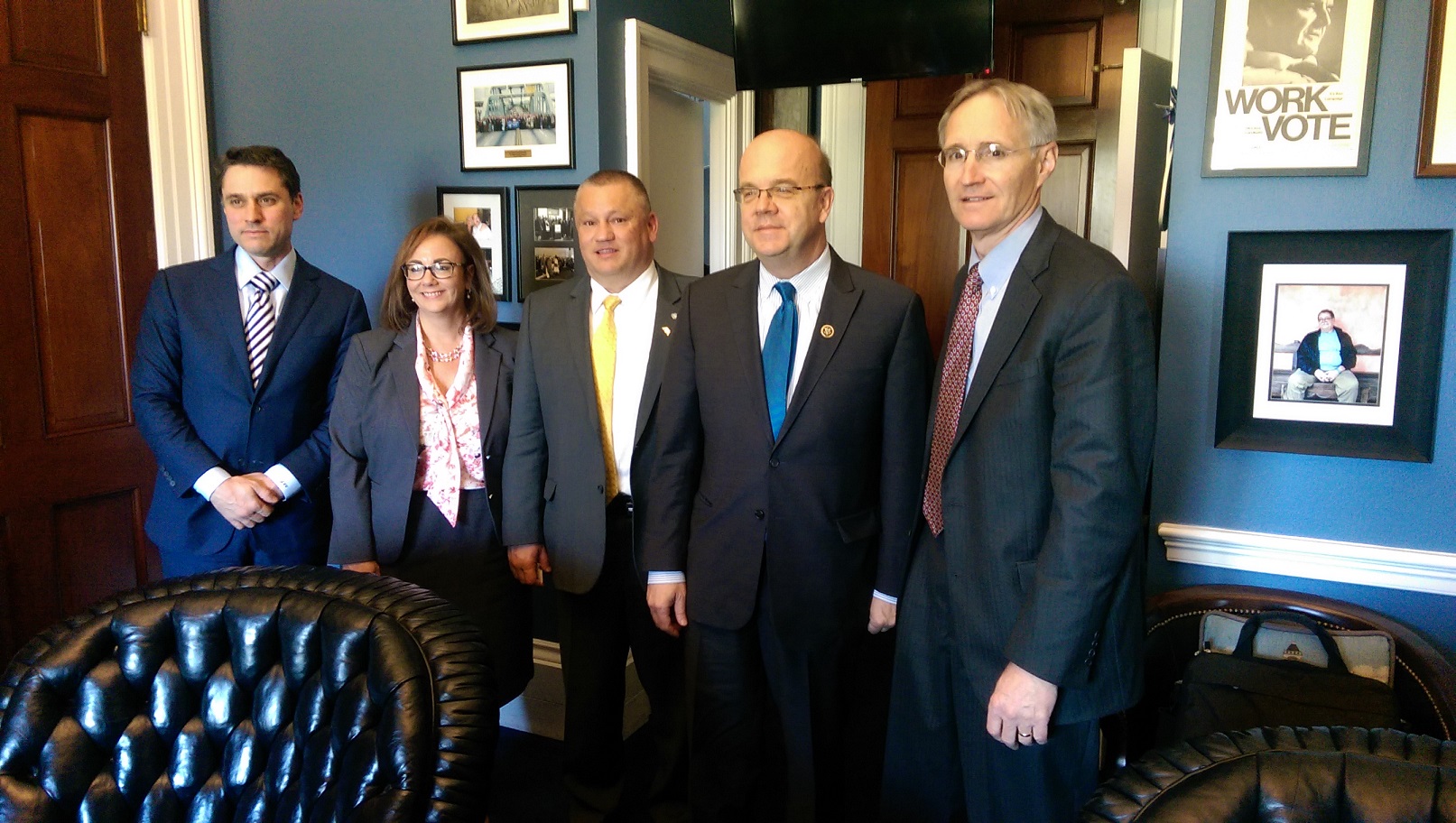 From Rep. James McGovern (Worcester), we heard stories from the night he recently spent in a homeless shelter in his district.  This issue is personal for him—he held a hearing on poverty earlier this month as well—so he understands the importance of lawyers in helping to keep people in their homes.  He also applauded our efforts on criminal justice, noting the need to focus on early intervention to help juvenile offenders turn their lives around, and re-entry efforts to give ex-offenders a real chance to “have a life.” 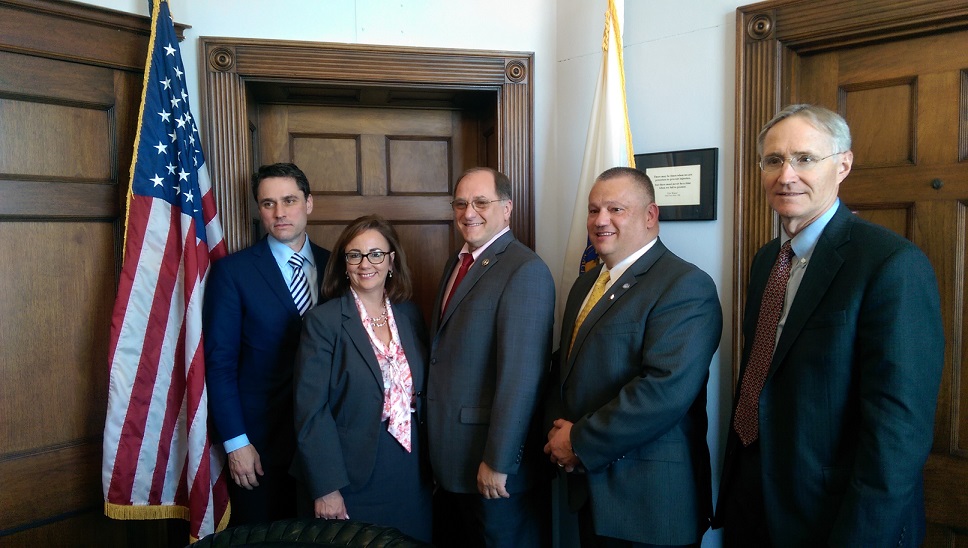 Rep. Michael Capuano (Somerville) called sentencing reform “the most hopeful thing we might work on this year,” saying this is the first time in his life that the potential exists for positive action.  He told us he’s always opposed mandatory minimums (as does the BBA): “I know the difference between a criminal and someone who made a mistake,” he said, but mandatory sentences ignore that distinction.  They also lead in some cases to criminalization of a health problem; the Congressman doesn’t want anyone to have to rob his mother’s house in order to feed their addiction.

During the foreclosure crisis, Rep. Katherine Clark (Melrose) saw how difficult it was for her constituents to get access to legal assistance, and how this led to many of them losing their homes.  So she knows all about the justice gap from her service in both the House and Senate in Massachusetts, where she worked tirelessly to try to close it.  Now, she’s brought that commitment with her to D.C.  Indeed, she won the Equal Justice Coalition’s Champion of Justice award in 2014 for her work on behalf of legal-aid funding at both the state and the federal level.  We have her support on this, as well as on sentencing reform.