An Inside Look: Court Management, Court Comments, and the Governor’s Legal Counsel at This Month’s BBA Council

At the BBA, we are always eager to hear a variety of perspectives on the justice system, and our Council meetings often provide an opportunity to do that.  This week’s Council meeting was especially fruitful, as Council heard from two very important individuals working to improve the justice system, Glenn Mangurian and Lon Povich, in addition to considering comments from two of our sections.

Our Council regularly considers policy-related items, and this week’s agenda included informal comments from our Bankruptcy and Real Estate Law Sections on a proposed Trial Court standing order for the BMC and District Court that would require plaintiffs to verify defendants’ addresses for claims incurred in trade or commerce or pursuing assigned debt.  Council discussed and approved comments that were sent to the Trial Court for its consideration.  We appreciate being asked to weigh in and hope that the Court finds these thoughtful comments helpful.

The conversation then turned to our justice system, with a presentation from Glenn Mangurian, Chair of the Court Management Advisory Board (CMAB).  The CMAB was established by the Legislature in 2003 after issuance of the report of the Monan Commission, which had been appointed the previous year to provide an independent perspective on the state of management in the judiciary and to make recommendations for its improvement.  The CMAB has a similar but enduring role. 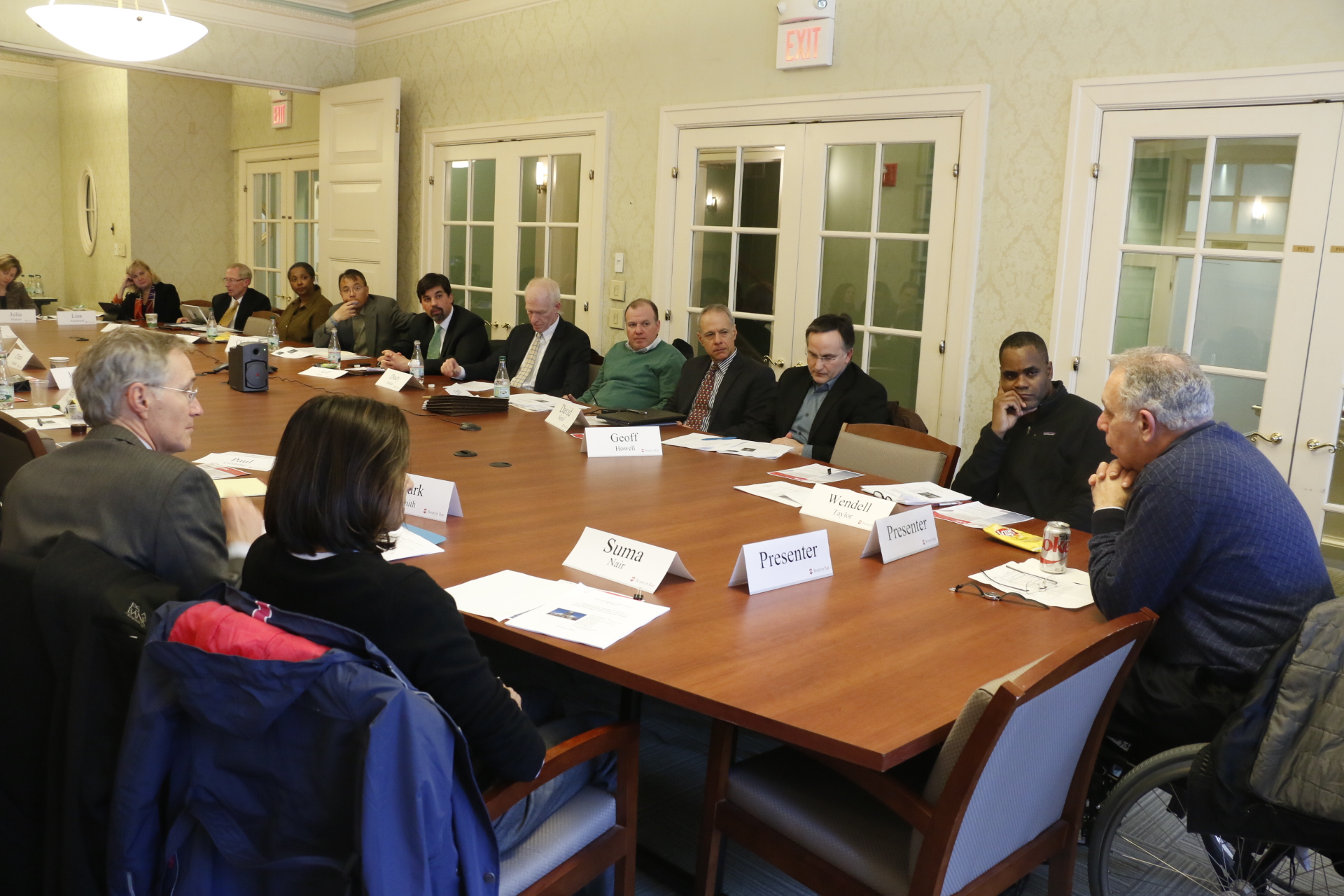 The CMAB is comprised of two ex-officio members and 10 members who are invited to participate by the SJC.  They all serve 3-year terms and can be reappointed to one additional term.  The Board, currently in its third iteration, elects its own chair.  Mangurian is only non-lawyer member and the first non-lawyer chair.  As he explains it, the CMAB is a working board.  It meets with all the chief justices of the various Trial Court departments and monthly with SJC Justice Margot Botsford, and with Trial Court leaders, Chief Justice Paula Carey and Court Administrator Harry Spence.  Mangurian also sits down with SJC Chief Justice Ralph Gants on a quarterly basis.

The CMAB issued a report in 2014, its most comprehensive and the first since 2010, describing the state of management of the courts.  In briefest terms, the report explains that the court has new leadership and is quickly moving in the right direction.  It also makes four recommendations for improvement:  First, the report espouses increased use of data and “organizational learning,” whereby the courts constantly reconsider each aspect of justice administration by studying other courts, other states, and other cultures.  The data recommendation calls for an evidence-based approach to problem-solving.  The courts have done a good job, particularly in recent years, of collecting data   as Mangurian explained, and it is now time to use those data to tweak court operations and expectations.

Second, the report discusses leadership, with a focus on encouraging the Trial Court to cultivate future generations of leaders.  Under this theory of talent development, the courts should give employees the opportunity to build careers, with room for advancement to reward individuals demonstrating ambition and potential.

The report next addresses the court “user experience,” which is the sum of every interaction – from the phone to the website, parking lot, and courthouse interiors.  It places an emphasis on hearing the voices of court users — a diverse group including lawyers, litigants, jurors, witnesses, victims, family members, and more, each with different needs and experiences — and trying to meet those needs as well as possible.

The final recommendation calls on the SJC to maintain a close relationship with the Trial Court, operating like a board of directors and working to build the public’s trust in the judicial system.  Mangurian reported that the SJC is already embracing this directive and now meets regularly with leaders of the Trial Court to discuss both immediate and long-term issues.

After Mangurian left, the Council welcomed back Governor Charlie Baker’s recently-appointed Chief Legal Counsel, and former BBA Council member, Lon Povich.  Having served roughly 65 days, Povich explained the whirlwind he’s experienced in his new position, through the worst winter in Boston’s history and a gaping budget deficit.  He broke down the Governor’s budget proposal for Council members, noting level-funding for the courts and civil legal aid (as well as for most areas), and explained the many difficulties the new administration faced in its preparation, including a short timeframe and major public transportation challenges, not to mention a mandate from the Governor not to raise taxes or fees. 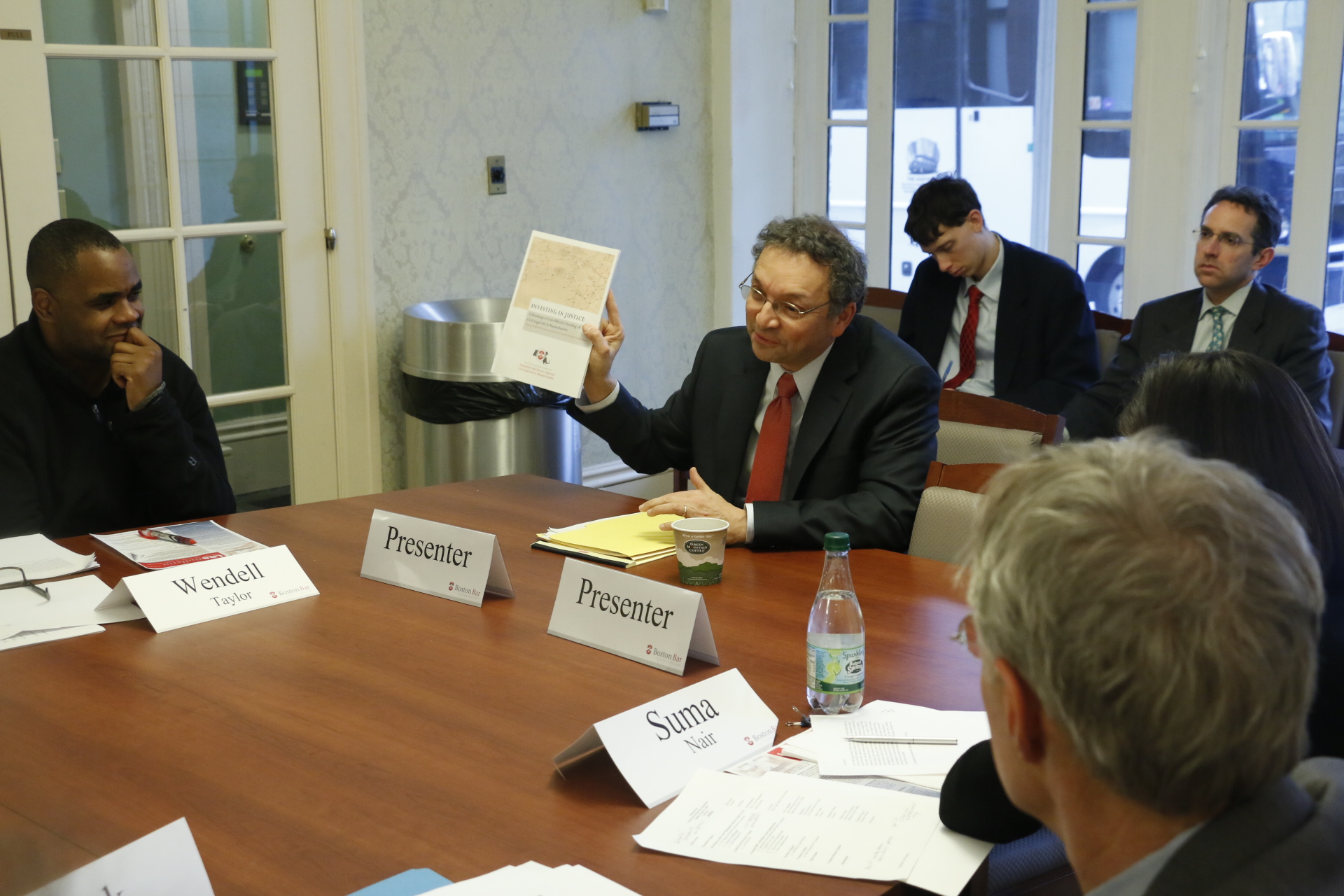 He also spoke about the judicial nominating process.  The Governor issued a new executive order (#558) at the end of January that reconstitutes the Judicial Nominating Commission (JNC).  The JNC is a 21- member statewide, non-partisan, non-political, non-compensated body that screens applications for judicial and clerk-magistrate positions.  Povich, who served for seven years on the JNC himself, spoke with great respect for their process and the amount of work JNC members do.

The Executive Order makes some minor tweaks to that process – for example, changing the language used to rate candidates (from “highly qualified,” “qualified,” or “less qualified” to “well qualified,” “qualified,” or “not qualified”, in keeping with the language used by the Joint Bar Committee) and increasing the threshold voting percentages for approval, with 50% (up from 40%) now required to advance to the “due diligence” stage, and 2/3 (up from 60%) now required for recommendation to the Governor.  Those increases were a nod to the amount of work conducted by the JNC in each step of their reviews, and will generally require an additional one or two votes.  He also spoke of the importance of recruiting strong judicial candidates and pledged that the Baker Administration will continue the pattern of exceptionally qualified and diverse nominees.

The BBA was pleased to hear from these accomplished individuals providing their different perspectives.  In one meeting, the BBA Council was able to provide the courts some insight from practitioners on a proposed standing order, learn about court management, and receive a report from the Governor’s office on court funding and the judicial nomination process.