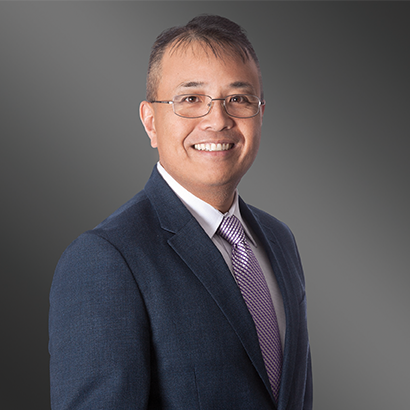 It doesn’t take long speaking with Chinh H. Pham to identify the ideals that drive him. Accessibility, equity, and inclusiveness motivate all that he does, which will soon include leading the Boston Bar Association as its new President—the first Asian American to hold the position.

“It’s an exciting time at the BBA,” Pham, a shareholder with global law firm Greenberg Traurig, LLP, said, highlighting a membership that has grown to more than 15,500, including nearly 150 sponsor firms and organizations across the Commonwealth. “Whether you are a new attorney who has recently completed law school or an experienced practitioner navigating a post-COVID practice,“ he continued, “you have not only a place, but a voice, at the BBA.”

Pham hopes and expects that members will use that voice.

It’s an exciting time at the BBA.

“I want to be a president that listens,” he said. “I want people to feel heard and to know that we will work with them on issues important to them. What makes the BBA unique is that we as an organization have the platform—and resources—to create a welcoming community for all lawyers, whatever their practice area or setting.”

No matter how strong the membership, though, the BBA is only as effective as its leadership. Pham is poised to continue in the footsteps of his predecessor, Deb Manus, while also leaning on his unique experiences to move the BBA forward as the organization moves on from the relative chaos a global pandemic has brought to the Commonwealth and the legal community.

Pham is no stranger to chaos. It’s how he described his initial journey from Vietnam to America in the spring of 1975 following the fall of Saigon. How else would anyone—let alone a 10-year-old child—describe a two-week journey that included dead-of-night travel by air and sea with stops at a Vietnamese naval base, military installations in the Philippines and Guam and, finally, a refugee camp in Ft. Smith, Arkansas?

Yet even then, young Chinh Pham’s natural optimism and clarity of vision sustained him in a time of uncertainty and doubt. Despite cramped conditions, foreign food, rough seas, and a language barrier, he recounts of his time during this journey, “we were just very appreciative and happy that we were still alive.”

That appreciation for people stepping up for others and offering what they could, when they could, has obviously stuck with Pham in the nearly 50 years since he first set foot on US soil. The man who seems to never forget an act of kindness has spent his adult life paying it forward while making a name for himself in the legal community in Greater Boston and beyond.

I want people to feel heard and to know that we will work with them on issues important to them. What makes the BBA unique is that we as an organization have the platform—and resources—to create a welcoming community for all lawyers, whatever their practice area or setting.

“Emigrating from Vietnam, Pham has overcome obstacles that most of us have never encountered,” remarked Terence P. McCourt, Pham’s colleague and co-managing shareholder of Greenberg Traurig’s Boston office. “Yet, he has excelled by knocking down barriers and helping many others in their paths to success.”

The Pham family moved quite a bit during his adolescence. After three months at Ft. Smith, his father accepted a job at Kemin Industries in Des Moines, Iowa. After his father earned a Bachelor of Science from Iowa State University, new work opportunities meant several moves, including stops in Michigan, Texas, and California. After graduating high school in San Jose, California in 1983, Pham received his Bachelor of Arts in genetics from the University of California at Berkeley. After three years in the biotech field, he attended law school—with the encouragement of his wife, Laureen—at the University of San Francisco, where he pursued his passion: the intersection of technology and law. While he finished law school, Laureen was finishing her MBA in Boston. The couple had made a bet that whoever received a job offer first determined the city they’d live in. Laureen in Boston beat Pham in San Francisco by a couple of weeks—not that he has any regrets.

“Boston is a wonderful town with many opportunities for a tech-focused attorney like me,” Pham said. “Once the relationship with people in the industry was established, it made sense to remain in Boston, and I’m glad we did.”

Now living in Newton, Pham also cited his son Collin and daughter Caraline—now adults—as among the reasons he chose to stay in the Boston area, giving them the stable environment growing up that he never had.

Pham didn’t just stay idly in Boston, though; he has made a name for himself here in the process. At Greenberg Traurig, LLP, he relies upon his expertise to advise clients on the creation, development, and management of patent portfolios; the acquisition and exploitation of intellectual property rights; and leveraging their IP portfolio for high-value commercial opportunities. He also currently serves as co-chair of the firm’s Venture Capital & Emerging Technology Practice and co-chair of the firm’s Intellectual Property & Technology (IP) Practice in Boston.

Among his many leadership roles with the BBA, Pham was a founding co-chair of the Association’s Life Sciences Conference. That natural attraction to life sciences and technology has also manifested outside the legal sphere for Pham. He has chaired the Museum of Science Board of Advisors and currently serves on the Museum’s Board of Trustees. He views the museum as a place that “values inclusiveness and sees itself as an agent of change,” a mission he has championed with Greenburg Traurig and continues to promote in the broader legal community.

Pham has also served in other leadership positions, including his time as President of the National Conference of Vietnamese American Attorneys (NCVAA) from 2019-20, where his goal was to “bring the NCVAA into the next decade, expanding opportunities for all members to get involved, network with each other, and learn from one another,” objectives that he will be similarly focused on while leading the BBA.

“Chinh is the ultimate professional—an excellent attorney who cares about his clients, a leader who wants to nurture the younger generation and advance our legal profession, and an all-around good and decent human being who has not forgotten his roots and who will continue to pay it forward,” said Ann A.P. Nguyen, current President of the NCVAA. “The NCVAA has benefitted from his leadership, and the BBA is lucky to have him at the helm.”

“His commitment to creating a more diverse and collaborative legal profession is nothing short of exemplary,” she noted. “His achievements reflect the value of our collective focus on providing an environment where highly skilled, diverse attorneys can flourish, impacting law firms and the communities they serve today as well as for generations to come.”

That commitment is evident in Pham’s hopes and plans for the BBA—plans which extend well beyond his one-year term while continuing the great work of his predecessor Manus.

“A lot of what we do cannot be accomplished in one year or one presidency,” he noted. “It’s a multi-year progression. So having the whole leadership team—Council members, Section and Committee chairs, BBF trustees, partner organizations and others—actively participating in these conversations will be helpful in gaining a clear understanding of where we want to head and the roles that everyone will play as we as an organization continue to grow and evolve.”

An avid runner, Pham views his time leading the BBA as more marathon than sprint. In fact, the qualities he says have allowed him to run more than two dozen marathons—focus, discipline, preparation, and determination—are what make him the attorney and person he is today, and the president he hopes to be moving forward.

“As runners, we rely on our experiences during training to prepare for and adapt to whatever race day may bring,” Pham remarked. “As an attorney, I must do the same thing—prepare for the potential long haul and adapt, as appropriate, so that I can address unexpected obstacles.”

That drive, determination, and attention to detail haven’t gone unnoticed among Pham’s many friends and colleagues.

“I have had the pleasure of working with Chinh for well over a decade,” said Mike Glennon, CEO of Saphena Medical Inc., a client company of Greenberg Traurig, LLP. “Chinh is an amazing IP attorney, a great family man, and over the many years we have worked together he has become a good friend. His determination, dedication and professional drive are second to none.”

As the BBA and the profession continue to emerge from the challenges of the past two and a half years, Pham is focused on the needs of new lawyers, who have been navigating the eddies of the pandemic with mixed success. This attentiveness to the needs of those who could benefit from shared wisdom comes naturally to him, especially after years of serving as a mentor at Harvard iLab, The Garage at Northwestern University, Northeastern University’s IDEA, and Columbia University. He is particularly enthusiastic about the BBA’s upcoming job fair—to take place in late October—as a program that he hopes will provide opportunities to the next generation of lawyers.

“Students from local law schools will have another opportunity to connect with Boston firms,” he remarked. “It’s great for not only the students, but also prospective employers to explore where needs may be and where the talent lies, benefiting both students and firms alike.”

As membership continues to grow and in-person events and meetings slowly resume, though, Pham knows the BBA can and should do even more to further its goals of advancing the standards of excellence for the legal profession, facilitating access to justice, fostering a diverse and inclusive professional community, and serving the city of Boston. This means broadening the membership and ensuring all members—regardless of experience or background—are heard.

“Having members, including on the BBA Council, various steering committees and Boston Bar Foundation leadership, from various socioeconomic and ethnic backgrounds, brings a different perspective,” Pham said. “Things that, perhaps, as an organization we haven’t thought about much or have thought about only superficially. If these folks feel connected and have an opportunity to be involved, to take on leadership roles, to see what a robust community we have here in Boston, I think that they will stay, and we will be better for it.”

And in turn, the BBA, its members, and the community will be better for having Chinh Pham at the helm.